This is how Bernie Sanders wins: The appeal to Donald Trump voters that would turn 2016 upside down 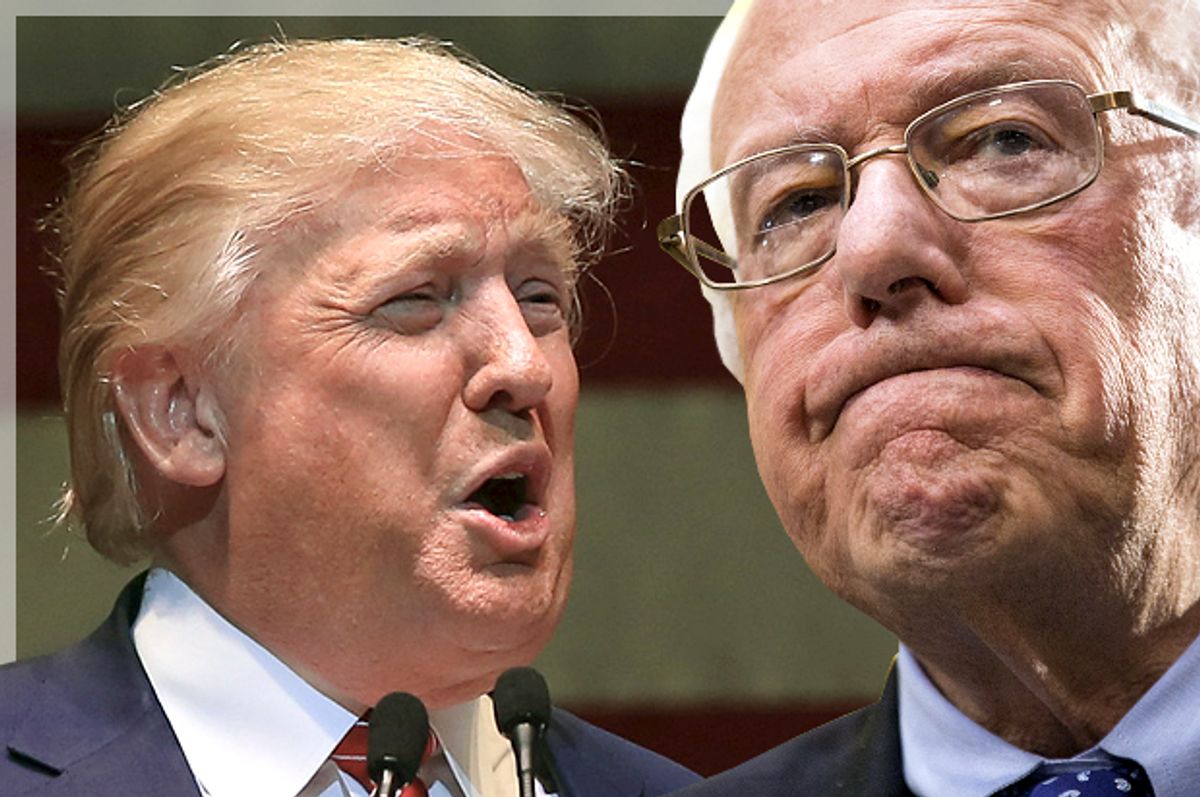 Donald Trump has carved out an interesting niche for himself in the Republican Party. In recent years, the GOP has been dominated by conservative evangelicals and what you might call the establishment wing of the party – think Mike Huckabee or Ben Carson versus Mitt Romney or Jeb Bush.

But Trump is a bit of an enigma – he doesn’t fit neatly into either of these boxes.

Thanks to a new survey released by the Brookings Institution and the Public Religion Research Institute, we now have some clarity on the Trump demographic. The average Trumpite is old, white, disaffected, without a college education, and part of the working-class. Unsurprisingly, he is also likely to project his economic discontent on immigrants, the default boogeyman for confused Jingoists.

William Galston summed up the results of the survey in a column for the Wall Street Journal:

“Among Republicans and Republican-leaning independents, 39% of the white working class backs Mr. Trump, twice his share of white college-educated voters. Fifty-five percent of his supporters are white working class, compared with 35% for the rest of the Republican field and only 32% for Mr. Carson. Among Mr. Trump’s white working-class supporters, the demographic group most likely to back him is composed of men ages 50-64, with no more than a high-school education. Compared with other groups in the PRRI-Brookings survey, these men are the least likely to believe that immigrants strengthen the U.S. and the most likely to believe that illegal immigrants are taking jobs away from American citizens. More than other voters, they are disturbed by the rising prevalence of non-English speakers in the U.S. And many blame Chinese imports and corporate outsourcing for U.S. job losses.”

These findings confirm what has been obvious for months now: Trump is a faux-populist whose singular appeal is rooted in racism and identity politics. Frustratingly, the Trump voter correctly diagnoses the problem, which is that the power structure doesn’t serve the working or middle class in this country, but he also misidentifies the enemy.

It’s not Mexicans or Muslims or some other minority group outsourcing jobs or buying elections or rigging the tax code in favor of special interests – corporations and their deregulating cronies in office (on both sides) are responsible for that, as are the broader forces of globalization and neoliberalism. And yet the ire of the typical Trumpite is directed at foreigners and black people. For instance, only 30 percent of white Republicans and Republican-leaning independents supporting Trump think immigrants strengthen the country; 60 percent believe discrimination against white people is as prevalent as discrimination against black people; and “72 percent believe that the Confederate flag symbolizes Southern pride rather than racism.”

These are the paroxysms of a paranoid conservative base that is angry with the status quo but deeply confused about who or what is responsible. Hard times are generally good to fascists because people need an enemy, someone to pin their problems on. And there is a latent racism always lurking beneath the surface in American politics; Trump, who I don’t believe takes any of this seriously, is shamelessly exploiting it.

The media is more than justified in covering the xenophobia driving Trump’s campaign, but equally depressing – and less covered – is the fact that most Trump supporters, if they weren’t blinkered by racism, would be supporting someone like Bernie Sanders, who actually represents their economic interests.

That Trump has emerged as the hero for a beleaguered white working class shows just how misguided his supporters are. Trump is a trust fund baby who inherited $40 million from his father. As Dylan Matthews noted in September, “Trump would’ve been a billionaire even if he’d never had a career in real estate, and had instead thrown his father’s inheritance into an index fund that tracked the market.” In other words, Trump is the last person the working class should fetishize as a model of “bootstraps” conservatism.

More importantly, Trump has nothing in the way of solutions. The WSJ calls him “the staunchest champion of the white working class that American politics has seen in decades,” and yet his campaign consists entirely of trite platitudes wrapped in nativist bile. He has no experience in government, no serious economic proposals, and no answers.

Trump is an empty vessel onto which angry and disillusioned white people can project their resentment, and nothing more.

But if Trump supporters were more interested in class than race, if they were honestly seeking an economic populist, someone who will advance the interests of the entire working class, they’d flock to Bernie Sanders. Sanders doesn’t traffic in xenophobia like Trump does, but he speaks directly to the concerns of alienated Trump supporters, and he does so in a serious and non-platitudinous way.

In fact, Sanders just gave a seminal speech in which he explained, in very clear terms, what’s wrong with the very system against which Trump voters are revolting. Sanders shattered the false narratives around the term “socialism” and articulated a vision of America that appeals to the working poor and to the broader middle class. Conservatives, however, are conditioned to reject Sanders without ever listening to what he says, and that’s a function of a much deeper ideological problem.

And that problem isn’t new. Conservatives have voted against their interests for several decades. As the WSJ concedes:

“Since the late 1960s, white working-class voters have deserted the Democratic Party in droves and now form a key component of the Republican base. For most of this period, the Republican establishment has held these voters with social conservatism and a tough-sounding foreign policy. But now working-class voters are in full revolt against policies – trade treaties, immigration reform and crony capitalism, among others – that they see as inimical to their interests.”

The economic grievances of Trump supporters are legitimate and shared with many on the Left. Trump puts a false face on those grievances and, sadly, that works in our current climate. But he has no plan to fix anything, and appears not to care. He’s content to stoke racial fires until his shtick runs its course, however long that is.

Meanwhile, Sanders – and to a lesser degree, Hillary Clinton – are proposing concrete alternatives to the status quo. Sanders’s economic populism isn’t couched in vitriol and hate, but his policies would make life infinitely better for the vast majority of Trump voters. But so long as they’re consumed with fear and misplaced anger, none of that matters.

And nothing much will change.