Wreck the halls: Another year of Grinchy conservatives using the "war on Christmas" to suck joy out of the holiday season

Holidays are meant to be fun, but under the guise of "saving" Christmas, conservatives are ruining it for everyone 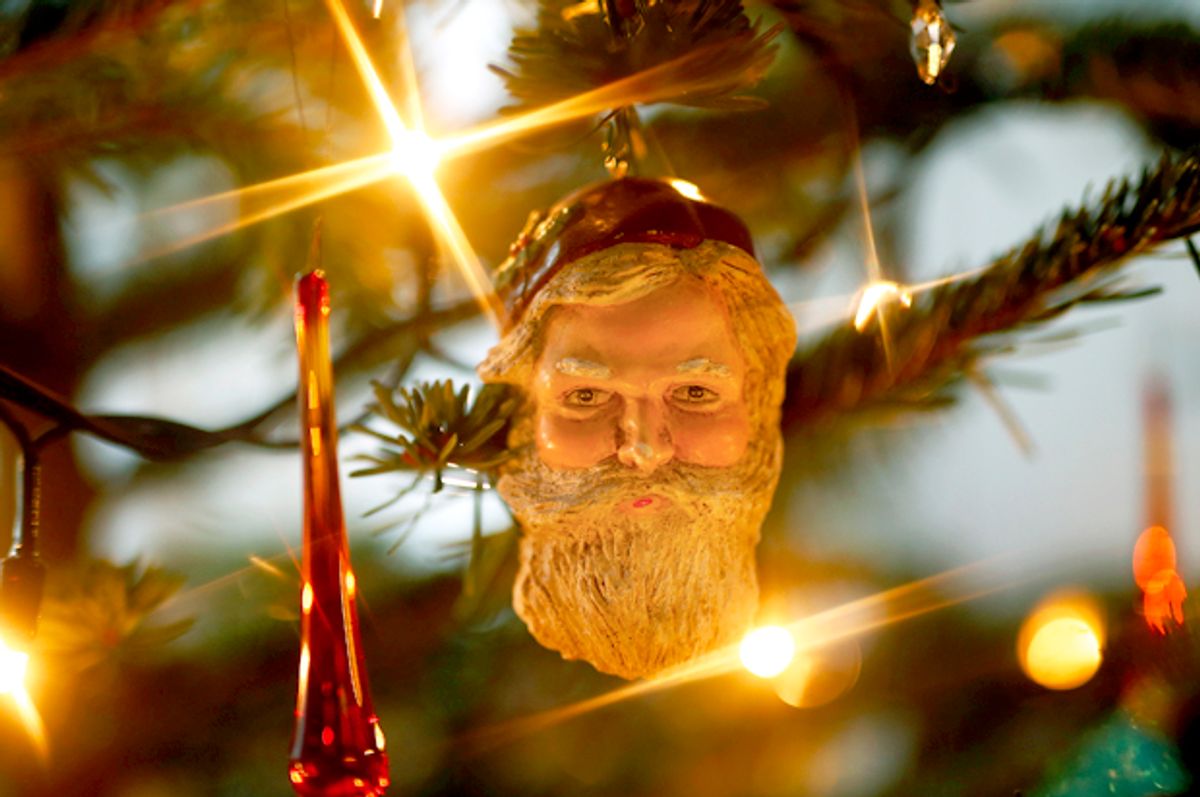 It's the holiday season! Time for making merry, buying gifts, eating and drinking too much, and trying to squeeze out one last hurrah before the bleak winter weather beats you into submission. Unless, of course, you're a right- wing nut, in which case 'tis the season for doubling down on whining that your identity and cultural traditions are the only legitimate ones and that any deviation from the white-straight-Christian-conservative norm is somehow an attack on you.

Leave it to right-wing America to take the season of joy and turn it to the season of resentment and avid policing of anyone deemed to be in violation of the right wing Christmas kulturkampf. There is a "war on Christmas" going on, people, and there is no room for merriment in this oh-so-serious war over empty right-wing pieties.

This year, the joyless frog-march to be "merry" in the narrow, conscribed ways dictated to us by conservatives is well-exemplified by a conflict going on in a small Ohio community called the Sycamore Township, which is outside of Cincinnati. There, a man named Jasen Dixon set up a fun spin on the traditional Nativity scene in front of his home, populating it with zombies. This was no half-baked effort, but a true work of goofy lawn art, as you can see from this screenshot of zombie baby Jesus from the local Fox affiliate. No actual babies, supernatural or otherwise, were harmed in the making of this zombie nativity scene. The whole point of this is clearly to have fun, which is what the holidays should be about. But while irreverence is an important part of every holiday celebration (what, jingle bells without the Batman smells?!) we now live in the era of the imaginary "war on Christmas," where hyped-up conservatives are forever at the ready to lose their minds over any behavior they deem insufficiently pious towards their Norman Rockwell-style image of what Christmas is supposed to be.

Subsequently, Dixon is getting harassed by the city government, which is claiming that his decoration violates zoning regulations. Dixon, on the other hand, says that his display falls well within the size requirements laid out by the city, and he believes they are picking on him because his decorations hurt the fee-fees of Christians who take themselves way too seriously. Evidence of this is supplied by fliers going around claiming that "God" (by which many conservative Christians always mean "I") "frowns upon this manger scene."

"God never expresses even the slightest inkling of humor," the flier continues, "towards demons or, in this case, zombies."

One gets the sense that "God," aka the person who made this flier, generally feels that humor is an inappropriate feeling, and that goes double for the holiday season, when the desire to be a bunch of wet blankets asserting the superiority of their culture over the rest of us is kicked into high gear.

The same joyless boundary-policing is threatening to ruin the holiday season in Tennessee, as well. The Tennessean reports that two Republican state lawmakers, in full pandering-to-the-resentful mode,  are calling for the resignation of the University of Tennessee chancellor Jimmy Cheek. His supposed sin is allowing the university to call for making the holiday celebrations welcoming to all people. At issue is a memo posted by the school's office of diversity and inclusion where the school reminded staff "we are fully committed to a diverse, welcoming, and inclusive environment." (Horrors!) To make sure that management is not "perceived as endorsing, religion generally or a specific religion," they recommended broad holiday parties, instead of "a Christmas party in disguise."

Cheek didn't write the memo, but nonetheless is getting raked over the coals for this apparently horrific idea that the holidays should be about fun for everyone instead of grim ritual about the supposed superiority of conservative Christians. Clearly what conservatives would like is for the university to hang a big sign over its offices that says "Conservative Christians rule, everyone else drools!" and anything short of that is waging ye old war on Christmas. Peace on earth? Goodwill towards men? Screw all that! The important thing is making the atheists, Jews, Muslims and even liberal Christians that you are supposed to be working with feel left out of the holiday celebrations.

Perhaps it's time for liberal Americans who celebrate Christmas to imitate our English brethren and start saying, "Happy Christmas!" instead of the archaic "Merry Christmas!" Nowadays, you can't be certain that someone who says the latter is actually wishing merriness upon you. On the contrary, the phrase has become weaponized, the conservative culture warrior's version of the New York salute.

Take, for instance, the sheriff in Harris County, Georgia, who put up a sign at the county border reading, "WARNING: Harris County is politically incorrect. We say: Merry Christmas, God Bless America and In God We Trust. We salute our troops and our flag. If this offends you…LEAVE!"

At first blush, this move seems paranoid in the extreme, as there is no movement of liberals running around taking umbrage if you salute the flag or wish someone a Merry Christmas. When it comes to taking offense, as these stories show, it's conservatives who are the real champs, losing their minds at the whiff of a silly joke or an attempt to have a holiday party for everyone who works at a place.

But of course, this sign isn't really about these mythical liberals taking offense at the truly well-meaning. It's about taking previously well-meant phrases, from "God bless" to "Merry Christmas," and turning them into euphemisms for "fuck you." If you do something like that, you can't be surprised if someone takes the meaning that you clearly were conveying, and gets miffed at you.

Sadly, this ugliness has leaked even into the more liberal lands of Brooklyn. I was walking through the park a few days ago and I passed a man yelling "Merry Christmas" at people. At first, assuming he was just overcome with the holiday spirit, I turned to smile at him. Then I saw the expression on his face: Angry, sullen and clearly screaming this phrase at people in an effort to intimidate them.

He wasn't wishing us a merry Christmas. He was browbeating us. Somehow, we were failing to do Christmas the way he wanted us to do Christmas. But apparently that is what fighting the "war on Christmas" is all about: Making sure to suck all the joy and fun out of what is supposed to be a cheerful holiday season.