Privacy is for white people: The San Bernardino shooters’ apartment, Robert Dear’s trailer and the media spectacle of black and brown victims 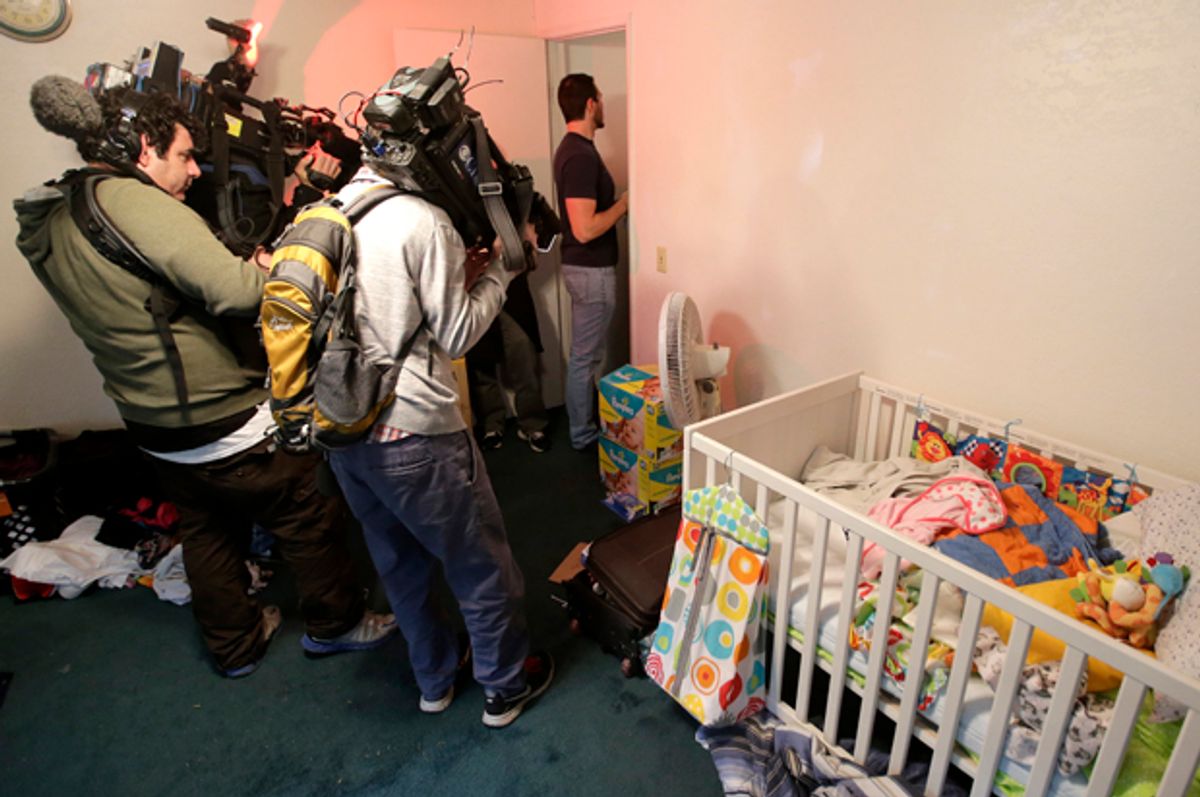 The media feeding frenzy after the San Bernardino shooting on December 2 is far from the first time the news media have embarrassed themselves for the sake of ratings, but it’s hard to think of a demonstration of the toxic news cycle as elegant and compact as watching reporters shove their way into the shooters’ apartment for “evidence.”

Indeed, it’s hard to watch any of the scenes from cable news on Friday of people rifling through the shooters’ drawers, poring over their bookshelves, and getting footage of their baby’s crib without disgust. It’s hard to imagine the reporters themselves not feeling shame about what they’re doing but clearly being “forced” to do it because everyone else is doing it and they’re constrained by the remorseless logic of having to Go Where the Story Is.

So far, so 2015. We’re all used to discussions of the perverse incentives presented to the news media, the way the business of attracting eyeballs has become increasingly cutthroat and when journalists make really bad decisions like flooding into a private home like vermin to carrion to get exclusive footage of a “terrorist’s prayer mat” it’s as much our fault, as consumers, as it is theirs.

Unlike the San Bernardino shooters, we don’t have any idea what the Colorado Springs shooter’s home looks like. The only coverage we have of how he lived is an exterior shot of a trailer on the land Dear owns, because apparently journalists didn’t see fit to demand access to his home and law enforcement didn’t see fit to grant it.

No one flipped through the Colorado Springs shooter’s photo album--if he has one--possibly breaching the privacy of his relatives and friends, even exposing them to vengeful reprisals. We don’t know if his mother or anyone else close to him has an ID lying around at his place, because no one was there to pick it up and hold it close enough to the camera to see the name and address.

The family members of the San Bernardino shooters were not so lucky.

We all agree that the media frenzy at the San Bernardino apartment was screwed up. Social media and traditional media both exploded with commentary on the foolishness of deciding so soon the investigation was over and opening up a crime scene to the vultures, on the recklessness of demanding a live feed of the apartment despite the risk of exposing private information, on how eerily the whole thing resembled a dark satire starring Jake Gyllenhaal.

But my question is: Why is this remarkable? Why does this feel new, when it comes to mass shootings? Why don’t I remember something like this happening with other mass shooters, since God knows we’ve had enough in recent years?

Why in this case do we have a landlord so willing to turn his property into a circus after Inside Edition reportedly slips him $1,000? Why in this case was the FBI so uninterested in keeping a lid on the crime scene? Why in this case did no journalists, not even from a supposedly “progressive” outlet like MSNBC, question if they were going too far?

A big part of the reason has to be the obvious: There’s a double standard. Most mass shooters are white men. This time the shooters were brown-skinned Muslims. For the former we use neutral terms like “mass shooting” or “school shooting”; for this particular case, we started saying “terrorism” very quickly. We don’t think of brown-skinned Muslim “terrorists” as fully human the way we do “normal” white Americans, even when those white Americans also have extreme religious views, even when they commit gruesome mass murders, even when everything about their actions meets the definition of terrorism.

It’s not only brown-skinned Muslim terrorists. This applies to everyone who’s “other” in the media. Anyone who gets categorized in our minds as someone who gets looked at instead of someone who does the looking.

How else do you explain the fact that when major news outlets find a reason to publish grisly photographs of dead bodies, the bodies in question are brown or black? It was a trend I first noticed when the bullet-riddled corpses of Saddam Hussein’s sons were printed on front pages across the Western world in 2003 to help with the war effort. I noticed it again when people defended the leak of a photo of Trayvon Martin’s body as necessary to establish context for the story of his death, even amidst the distress it caused his family and many observers.

Now, in 2015, seeing black people brutalized and killed on video has become a sick routine. Everyone eagerly shared the video of Laquan McDonald's death, Eric Garner’s, Tamir Rice’s. Open up your feed on Facebook or Twitter, click on any popular aggregator, and instantly watch a teenager shot in the back, a 12-year-old boy shot in the chest, a man being strangled while crying for mercy.

I would never in a million years argue those videos should have been suppressed or censored. The facts that those videos reveal helped galvanize the #BlackLivesMatter campaign--the contradictions between what those videos show and what we were told by police is what made the reality of police misconduct too blatant to ignore.

But why is it that we’re so blasé about posting and reposting them in newsfeeds, over and over again, turning this documentation of human tragedy into a revenue source? Shocking videos always raise awareness in the short term, yes, but how much do they numb us in the long term as we grow to accept these images as “normal”, part of what Ta-Nehisi Coates calls the American tradition of destroying black bodies? Every day I see friends on social media talking about the psychological stress of having to watch people who share their skin being beaten and shot, knowing that somewhere out there is a jaded editor or producer who sees the footage as valuable content.

After all, images of horrible things happening to black Americans haven’t been circulated solely to raise awareness of police violence. Lurid images of “gang violence,” “inner-city poverty” and, most of all, “riots” are the stock in trade of the evening news. The media seemed less interested in the bigger story back in 1992 in LA than they were in catching the best possible images of scary black people to titillate their viewers, and the Baltimore unrest in April shows not much has changed since then. The same media outfits—”progressive” or “liberal” or “centrist” or “conservative,” doesn’t matter--were all there capturing the juiciest footage they could, regardless of whether it was representative of what was going on in general, regardless of who might be hurt by the distorted picture that footage painted.

There’s no consistent ideology here, no principled agenda of using images of violence to shock America into doing the right thing. The same sensationalism that drives protests is then used to demonize them. Black bodies are normalized as both the victims and perpetrators of violence--the one consistent thread is that images of black people are, one way or another, linked with violence overall. Hence we’re more comfortable with black people dying when we need an extra to get killed in a movie. Hence we literally do not perceive black people’s pain as being as real as white people’s. We’re desensitized to images of black people in suffering or distress; we think of such images as commonplace and adjust our expectations accordingly.

On the other hand, when a black man viciously murdered his white colleagues in Roanoke, Virginia, a black man who was a media professional and calculated his actions to create the greatest media impact possible by creating and uploading a video he shot of the crime, that was when media pundits found their stomachs weaken. It took a viral video of white people being horribly killed for the New York Times to speak out against using the video or stills from it as part of its coverage. A psychologist was moved to speak out against sharing the video on social media for the sake of your psychological health and the health of your followers--a sentiment that was noticeably absent from mainstream media’s discussion of “viral videos” of black people being killed. (But not, it’s worth noting, from black voices on social media, who have been protesting the callous treatment of these images all year.)

No white killer, no matter how graphically bloody theirs crime and how eccentric their personality is, has had their privacy--and, more importantly, their innocent friends and family’s privacy--as cavalierly invaded as the San Bernardino shooters have. No white victim has, no matter how critical it may be to establishing context for the crime that killed them, had explicit images of their dead body lying in the street passed around as avidly as Trayvon Martin and Mike Brown did.

When I defended the sentiment (though not the specific actions) behind the University of Missouri protesters trying to keep reporters out of their encampment a lot of the pushback I got was tinged with bewilderment.

“Why would protesters want to try to exclude reporters from their space?” I was asked. “Regardless of whether they have the right to do so, what benefit could it be to an activist to refuse media coverage? The press is on your side.”

I submit the theory that like so many other of our institutions--such as, for instance, the police--whether the press is on your side depends on who you are. The press doesn’t have to sympathize with you or take your side to unconsciously nonetheless defer to basic rights of dignity, privacy, humane treatment that we take to be universal, even for murderers.

And the press doesn’t have to hate you or side against you to unconsciously deny you those same basic standards of fair treatment, the kind of standards people with privilege blindspots think apply universally across race and gender but in reality never do, not even for victims of murder.

I submit that when people of color say they’re afraid the press will sensationalize their actions and undermine their cause, they might know what they’re talking about. I submit that when they’re upset that the press as a whole profits from selling access to images of black people in the throes of suffering, they have good reason to be. And I submit that when they say this is something they might have experienced very differently from their critics, it would behoove the critics to listen for a bit before going on a tear about the sacredness of the First Amendment and the Fourth Estate.

If you ever wonder why someone else might be more fearful or resentful of press coverage than you, and feel tempted to mansplain or whitesplain or whateversplain to them that all media exposure is good exposure, please remember last week’s events, and remember the half-apologetic tone of a “progressive” MSNBC commentator picking up a woman’s driver’s license and holding it up to the camera under the pressure of doing his job. Remember Mike Brown’s father asking a white artist not to make an exhibit out of a replica of his son’s corpse lying face-down in the street.

Remember that as with everything else exposure comes with a cost for every benefit, and, just as everywhere else in our society, those costs and benefits aren’t distributed fairly.