"Trump's been a good example," Palin says, and hopefully "Carly will do the same" 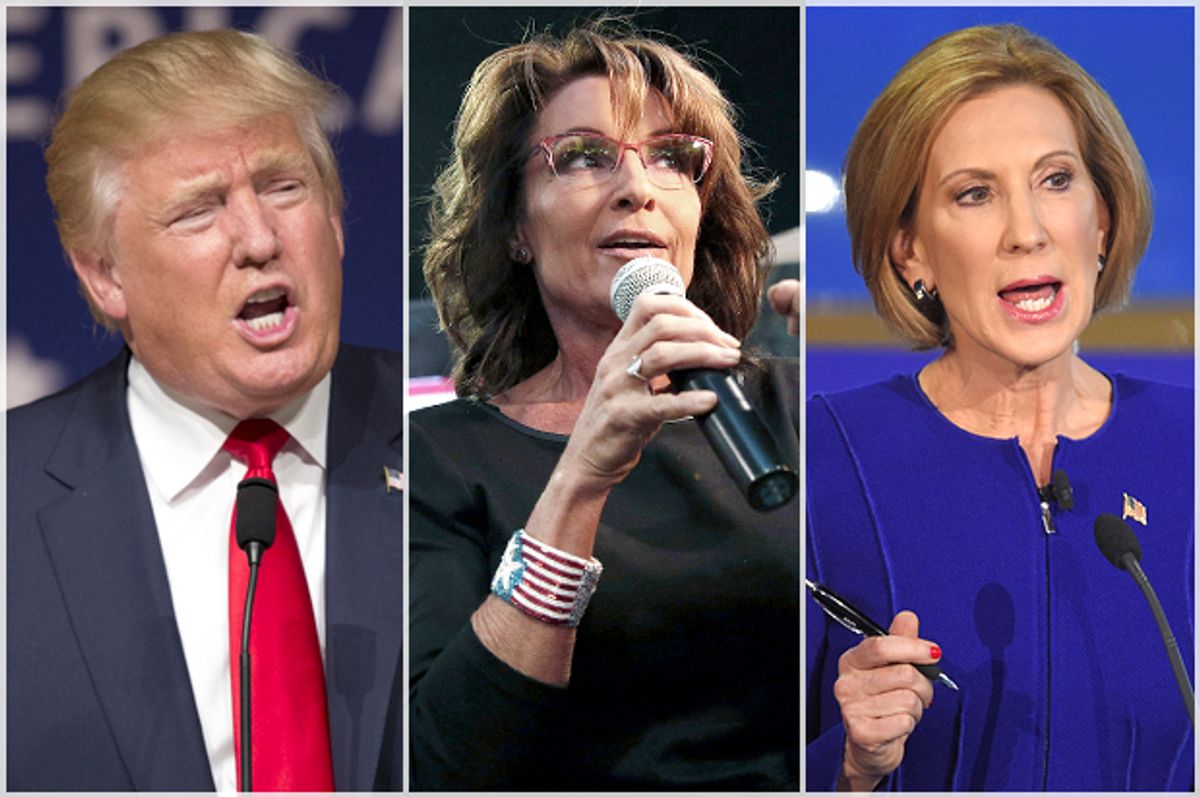 Carly Fiorina finds herself in the unfortunate position of having to point to her "tied" poll standings with Jeb! Bush as an example of how she is defying expectations this election cycle and now the only female Republican presidential candidate is getting a bit of unsolicited advice from the GOP's last, nationally prominent woman, Sarah Palin: Be as brash as Donald Trump.

The Washington Examiner reported on Palin's address at the Reagan Ranch Center in California on Friday, noting that former Republican vice presidential candidate told the crowd of young conservative activists that she wished Fiorina would behave more like the current GOP presidential frontrunner.

"We want candidates, and we need candidates, to tell us what [they] think," Palin told the Young America's Foundation. "That's kind of lacking in [Fiorina's] campaign right now."

Of course, Trump is the center of the political universe today for his new proposal to ban all Muslims from entering the United States.

"For what it's worth, I would encourage her to not let any high-priced consultants who run your campaign mold you into something that's not politically correct and kind of middle-of-the-road on some issues," Palin said, lamenting her own failed shot at the White House. "We didn't win that one [because] someone tried to tell us what to do, and what to say and how to shape our message to the audience," Palin said of her infamous 2008 run with Arizona Senator and Donald Trump foe John McCain.

Palin has since switched loyalties, refusing to rule out a run as Trump's vice president in 2016, even as The Donald attacked her former running mate as a failed warrior for being captured during the Vietnam War. Palin has long praised Trump for “shaking it up the way it should be and he’s leading other candidates and having to talk about the issues that average Joe Six-Pack American wants to hear and wants to talk about.” And the feeling is mutual. Trump has called Palin a "really special person" who he'd love to have in his Cabinet.

On Friday, Palin repeated her Trump praise, encouraging Fiorina to follow in The Donald's footsteps.

"What really shot him to the forefront was his candidness, and that should inspire other candidates to be even less guarded [and] not let a filter come between you and the people you are wanting to serve," she said, adding, "Trump's been a good example of that and hopefully Carly will do the same."