"Stop the bullsh*t,” Donald Trump: Even an old buddy like Russell Simmons is disgusted with him now

The entertainment mogul tells Trump that despite their friendship, he will campaign "rigorously" against him 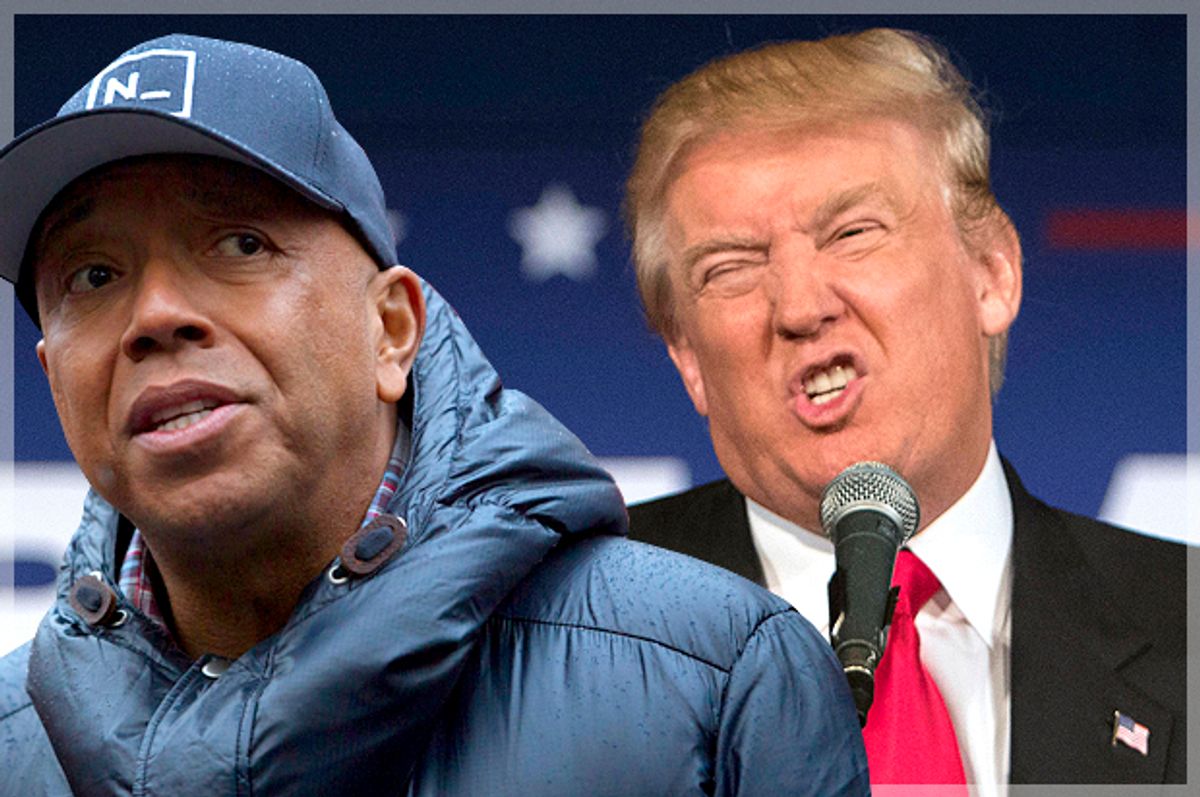 Add one more name to the growing list of public institutions and individuals joining the chorus throwing a big "Could you just not?" in the direction of Donald Trump. This time, it's The Donald's old buddy Russell Simmons.

In a new open letter in Global Grind, Simmons deftly articulates that particular kind of sad revulsion that comes from watching a formerly good friend go bad — a sentiment usually best expressed in Marvel movie sequels, Taylor Swift lyrics and gifs found under the heading "SMH." Simmons writes that "Over 30 plus years you have been an amazing friend; endorsing my books, coming to my shows, flying me on your planes, your helicopters, and even allowing my family members and myself to stay in your house in Florida many times." But as I'm sure we can all relate — just because a buddy flies you around on his helicopter, that does not mean you have to stand idly by while his presidential campaign turns into a Leni Riefenstahl movie.

You know that feeling when your uncle starts posting crazy "facts" from some completely shady and wrong "research" on his Facebook page? That moment of: Do I get into it, or do I let it slide because he took me to "Star Wars?" Simmons has clearly been having a few of those lately. As he points out, he's the Chairman of The Foundation for Ethnic Understanding, "whose sole mission is to fight bigotry of all kinds." That's why despite their history, he's stepping up now to tell Trump, "My friends, both Muslims and Jews, are saying there are so many comparisons between your rap and Hitler’s, and I cannot disagree with them, Donald…. Now, you seem like a one-man wrecking ball willing to destroy our nation’s foundation of freedom. Stop the bulls__t. Stop fueling fires of hate. Don’t feed into the rhetoric created by small-minded people. You’re smarter and certainly more loving then you let on."

He adds, chillingly for those of us whose brains still seize up at the mere thought of the words "President Trump," "I will be campaigning rigorously against you. But if you win, I might still accept an invitation to your house to straighten you up every so often."

It's one of the more generous public responses to Trump in recent days, the assessment of a chum who can still with a straight face refer to Trump as "a generous, kind man." In an editorial memo Tuesday, Buzzfeed editor-in-chief Ben Smith advised staff regarding whether "calling him, say, a liar and a racist violates our policy asking that you not be political partisans on social media" — and concluded, "It is, for instance, entirely fair to call him a mendacious racist, as the politics team and others have reported clearly and aggressively: he's out there saying things that are false, and running an overtly anti-Muslim campaign. BuzzFeed News's reporting is rooted in facts, not opinion; these are facts."

HuffPo's Arianna Huffington sent out a similar flare on Tuesday — amending the site's earlier vow to cover Trump's campaign as "entertainment," and admitting, "Now that Trump, aided by the media, has doubled down on the cruelty and know-nothingness that defined his campaign's early days, the 'can you believe he said that?' novelty has curdled and congealed into something repellent and threatening -- laying bare a disturbing aspect of American politics…. So we'll not only be covering the ways Trump's campaign is unique in recent American politics, but also the disastrous impact it continues to have on his fellow candidates -- and the national conversation." Last week, the Washington Post opined straightforwardly that "Donald Trump is a bigot and a racist."

It's one thing for the all-powerful liberal media to point out what a dangerous garbage person Trump truly is. But with every day that the mogul gets to say and gain support for ideas that are just blatantly evil, it's becoming more apparent that even ostensibly neutral sources are deciding that a misguided need for "balance" is only giving more power to ideas that run entirely contrary to our American ideals, as well as flat out lies. Now, even Trump's old friend — a man who just four years ago persuaded him to have a private meeting "to discuss anti-Muslim bigotry and the importance of tolerance" — is realizing how deeply Trump has fallen into the abyss of incendiary rhetoric. And while Simmons words will likely have zero impact on Trump himself, they are just another example of how isolated the candidate has truly become, how cut off from reality and his former allies.