These are the mascots of the party of rage: How the NRA, white supremacists and anti-choice terrorists have all found a BFF in the GOP 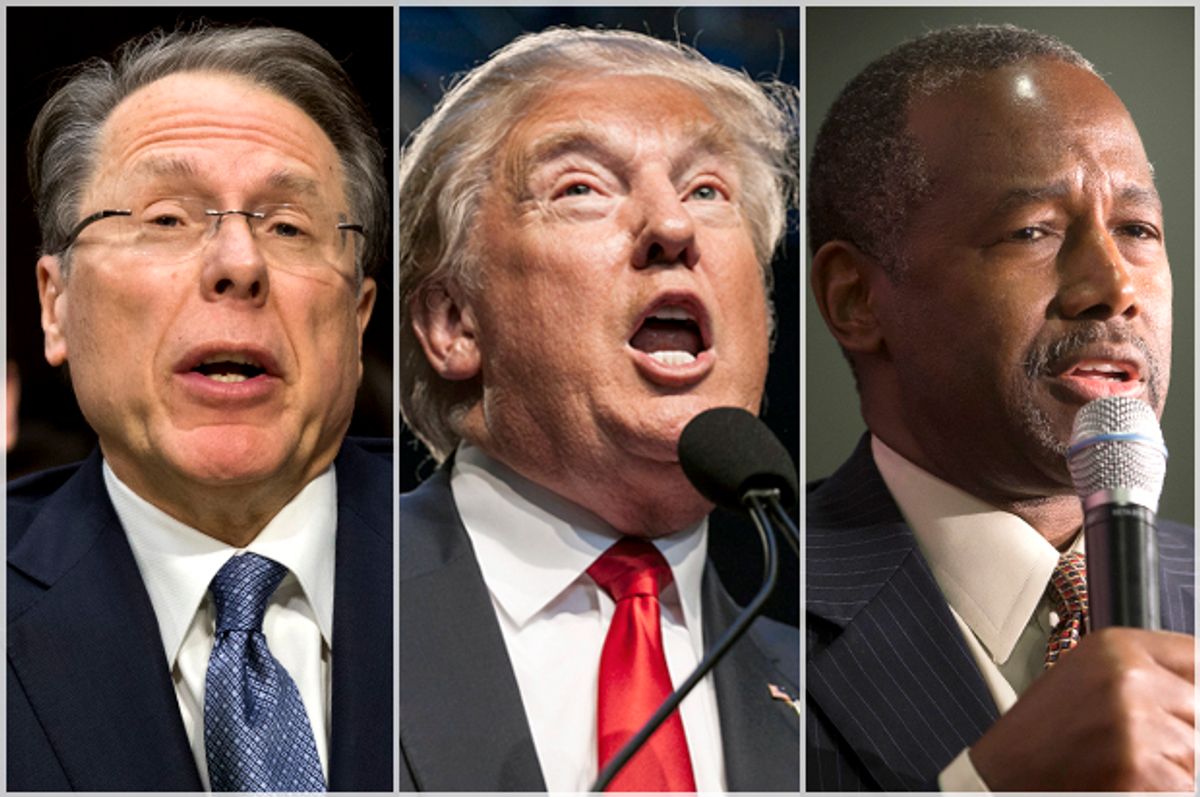 It's been a harrowing week for the Republican Party and its NRA puppet-master Wayne LaPierre. In the long dark shadow of both the Planned Parenthood massacre in Colorado Springs and the horrifying tragedy in San Bernardino, the GOP responded by, yes, unsuccessfully attempting to de-fund Planned Parenthood for the gazillionth time, while blocking legislation that would've prevented suspected terrorists from freely stockpiling firearms. Put another way: a terrorist attacked Planned Parenthood and so the GOP tried again to de-fund the organization; and a pair of possible Islamic terrorists murdered 14 people and so the GOP once again exempted would-be terrorists from the federal background check system.

What we can absolutely say for certain is that almost nothing supersedes the GOP's fealty to the NRA and the for-profit death industry LaPierre and his flying monkeys are tasked with defending. Not even the terrorist threat, which the GOP seems to elevate above all other issues, out-ranks the party's maniacal loyalty to these deadly retail products. Hell, the worst mass shooting since Sandy Hook failed to shake some sense into the GOP and its kneejerk loyalty to the gun lobby.

Commensurate with an analysis of the GOP's inextricable bond to the NRA has to be a discussion about whether the GOP's rhetoric and actions are inciting violence and, in too many cases, terrorism. We already know that a Republican administration's Middle East policies gave rise to ISIS and the further destabilization of the region. But is there a specific link between domestic terrorism and the GOP? The Republicans will, of course, deny it. The evidence, however, is incontrovertible.

The GOP's legislative refusal to allow the names of suspected terrorists -- terrorists that include right-wing domestic extremists, by the way -- to be included in the background check system is evidence enough. There's simply no excuse for its refusal to expand background checks accordingly. They're willing to curtail nearly all other constitutional rights in the face of terrorism, except this one. Why? Conservatives have gone so far as to call President Obama a "pussy" due to his posture on terrorism, yet they give their GOP leadership a pass. That's bad enough, given how the Republicans think radical Islam is the greatest threat to America.

Likewise, mitigating domestic terrorist threats against various targets, specifically abortion clinics and Planned Parenthood facilities, appear to be an even lower priority -- nearly to the point of being nonexistent.

Back in 2009, the Republicans crapped their cages when the Department of Homeland Security issued a report about right-wing extremism, including anti-choice attacks against abortion clinics. While this brand of extremism is mostly unrelated to Islamic jihad, it's been far more deadly. As of the beginning of 2015, and since 9/11, domestic terrorism has inflicted twice as many casualties than Islamic terrorism inside America's borders. Add to these figures the heroes who were killed in Colorado Springs.

As if that wasn't bad enough, the GOP has offered up legislation to protect abortion clinic terrorists. Not once, but twice.

In 2011, Republicans in the South Dakota legislature introduced a bill that would've made it "justifiable homicide" to kill anyone involved in aborting a fetus, short of pregnant women themselves.

Sponsored by GOP anti-choice zealot Rep. Phil Jensen, the law would've legalized homicide if the killer acted "while resisting an attempt to harm" a fetus. In other words, anyone directly related to pregnant woman could freely kill doctors or nurses involved in terminating that woman's pregnancy, including the woman's "father, mother, son, daughter or husband." It didn't matter if a woman actually wanted an abortion, anyone who dared to help her get one could be legally killed. Jensen stated at the time that the legislation only included thwarting illegal acts against fetuses, noting that abortion isn't illegal (yet). That said, according to Mother Jones, certain kinds of abortions are, indeed, illegal in South Dakota, such as abortions performed without parental consent. South Dakota also has a mandatory waiting period and a law requiring counseling about so-called "fetal pain." The state also implemented a de facto ban on nearly all abortions in 2006, which was later overturned by voters in a referendum.

Jensen's House Bill 1171 passed out of committee with all nine Republicans on the panel voting in favor of the law, but the legislation was quickly shelved after public outcry.

The fate of the HB 1171 notwithstanding, a harsher companion law was introduced in Nebraska. Introduced by Republican Rep. Mark Christensen, the Nebraska law made it "justifiable homicide" for literally any third party to thwart an abortion. So, any anti-choice vigilante could murder an abortion doctor or nurse who was tasked with performing an abortion on anyone.

Christensen, like his South Dakotan counterpart, tried to sidestep accusations that he was de-criminalizing homicide against healthcare professionals. The lawmaker said LB 232 was necessary to allow pregnant mothers to protect their fetuses. But knowing Christensen's radicalism on abortion, including the fact that he's opposed to abortion even in cases of rape, the intent of the bill is more than obvious, especially knowing that anti-abortion groups stumbled over themselves in a rush to endorse the legislation.

These two laws manufactured almost direct linkage between the GOP and a tacit endorsement of terrorism against abortion providers, not unlike what we witnessed in the last several months at Planned Parenthood locations in Colorado Springs, Pullman, Washington, and Thousand Oaks, California.

Together, these bills send a clear message: the Republicans believe it's morally justifiable, if not legal, to kill anyone who might abort a fetus.

The other clear message is this: If you plan to have an abortion, you'd better watch your back. While, yes, terrorists like Robert Lewis Dear are primarily acting to stop abortions, they're also inciting fear among anyone who might work at or visit a healthcare clinic that includes abortion services. And that, by definition, is terrorism, even if no one is killed. (See also the recent casualty-free fire-bombings of Planned Parenthood in Pullman and Thousand Oaks.)

If we combine what author Dave Neiwert called "eliminationist rhetoric" by the GOP, which includes violent language such as "Second Amendment remedies" and "don't retreat, reload," one of our two major political parties is guilty of not just turning a blind eye to domestic terrorism after it happens, but it also appears to be finding sneaky ways to legalize certain forms of it. (We won't even get into the length of time it took the Republican presidential candidates to condemn the Colorado Springs attack. Suffice to say, exactly none of the candidates who finally responded two days later actually used the terms "domestic extremism" or "terrorism," yet they all continue to criticize President Obama for not often using the phrase "radical Islam.")

Your personal views on abortion are one thing, but every American should be vocally opposed to violence against doctors, even if they work in clinics that provide legal medical procedures. This is a no-brainer. Terrorism is wrong, regardless of what it seeks to accomplish. Frankly, I can't even believe we're having this conversation in the first place. The very fact that we have to spell it out this way is, itself, a tragedy.