Does female sexuality cause violence? Ted Cruz, with his endorsement of E.W. Jackson, seems to think so 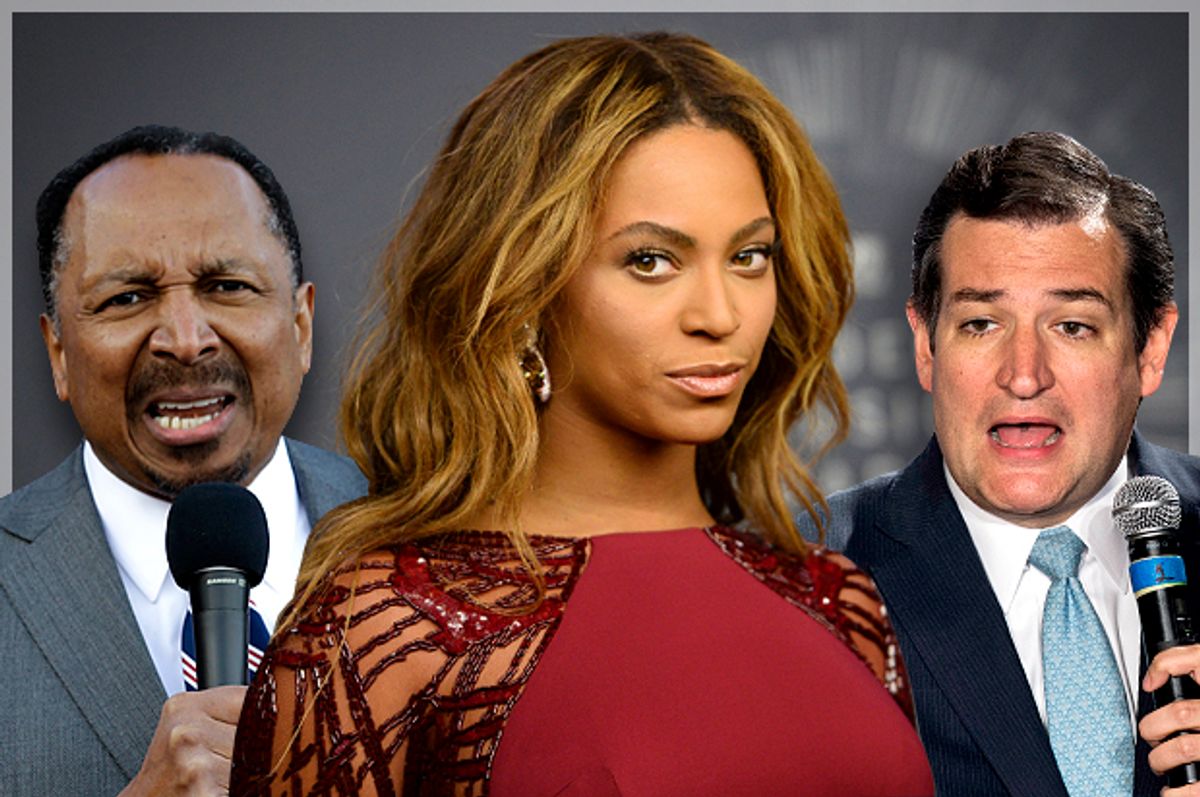 While the media devotes most of its attention to being horrified by Donald Trump, the equally repellent Ted Cruz continues his project of collecting support from some of the nastiest characters on the Christian right. His latest dear buddy is E.W. Jackson, an extremely nutty religious right activist who endeared himself to the conservative movement in the 1980s by being a black man fighting against desegregation efforts in Boston.

The Cruz campaign's national director for faith and "religious liberty" (which is the new conservative code phrase for forcing their faith on the non-believers), Buddy Pilgrim, came out Wednesday to endorse Jackson's new project, called "Project Awakening: A Recovery Plan for American’s Inner Cities." Jackson and his group Stay True to America’s National Destiny (STAND) argue that the main problem facing black people in America today is not poverty, racism, or police violence, but the fact that women, especially black women, have sex.

“In a world where Beyoncé shakes her ‘bootie’ and Miley twerks, it is difficult to imagine a culture of sexual responsibility, let alone abstinence,” the document announcing the project explains. And this failure to abstain from sex is, Jackson and his followers believe, the main and possibly sole cause of black people's woes.

How women can destroy their own community with the choices they make behind closed doors might not seem immediately apparent, but the folks at STAND have a theory. The document argues that "the single greatest predictor of poverty is not race but the lack of a father in the home" and that this supposed fatherlessness is caused by a lack of "sexual morality."

The document went on to explain that women don't have sex because they like it — which, to be fair, may not be these men's personal experience in these matters — but because women are in thrall to a "pattern of sexual exploitation" that is caused by, you guessed it, not having daddy knowing best in the home. "Ultimately, the absence of a caring father causes girls to go looking for love in all the wrong places.”

"Our welfare policies have incentivized cohabitation, single motherhood, and unemployment," added Rev. Cecil Blye, the vice president of STAND under Jackson, at a news conference highlighting Cruz's endorsement and rolling out this project.

It's an argument based on a number of risible and false assumptions: That no one will marry a woman unless she's a virgin. That marriage is incompatible with enjoying your sexuality. That women have sex because they are lost and broken, not because they derive pleasure from it. That a man cannot be a father unless he is married to a woman. That women are incapable of teaching children values and self-esteem. That getting married is some magical cure for poverty. That marriage is inherently such a miserable institution that the only way to get women to do it is by strong-arming them into it.

Perhaps Jackson and Blye should spend less time bashing Beyoncé and more time listening to her, because she and her husband Jay-Z are an excellent example of how marriage can be fun and sexy and entered into willingly by both parties, instead of using sex to lure men and the threat of starvation to lure women.

Versions of the loose-vaginas-cause-all-the-world's-ills argument have been banging around in conservative circles for decades now, and are a particular favorite to turn to when the issue is gun violence. Mitt Romney trotted out a truncated version of the sex=single motherhood=gun violence argument during the 2012 debates in an effort to deflect a question about guns. Don't worry, men! Your substitutes phalluses are not the cause of crime. Women cause crime, by having sex on their own terms like their bodies belong to them!

But is it really safe to say that single motherhood, much less female sexuality itself, is the root cause of crime? This is a question that can be looked at from many angles, starting with Jackson's assertion that Beyoncé's bootie and the shaking of it is a major instigator of crime.

Destiny's Child, the band that kickstarted Beyoncé's rise to fame, was founded in 1990 and their first record came out in 1998. Since then, Beyoncé had a string of hits, both with Destiny's Child and as a solo artist. During that time, which involved innumerable instances of public bootie-shaking, the violent crime rate in the U.S. plummeted, as this Brennan Center chart demonstrates. It's highly unlikely that Beyoncé's career, much less any ass wiggling contained within, had any impact on the crime rate, but it did, then clearly the effect was a positive one.

It is true that single motherhood, which is caused by sex (as is married motherhood, but don't tell Cruz and Jackson that), has been on the rise. But I refer you back to that chart and suggest that, if single mothers are the cause of crime, they are doing a really poor job at it, since violent crime rates have largely been trending down for the past few decades, even as single motherhood has become less stigmatized.

As for the claim that poverty is caused by people being too busy bumping nasties to get married, research shows that poverty is caused more by lack of economic opportunity than who touches what naked bits to who. Research shows that while there is a lot of poverty in cities with high rates of single motherhood, families that have both parents at home experience the same lack of upward mobility as their single mother-led neighbors. Getting married doesn't mean that job opportunities simply appear out of nowhere. The correlation between non-marriage and poverty suggests less that non-marriage causes poverty than that being poor makes it hard to get married.

The claim that men will not lower themselves to marry non-virgins has been thoroughly tested through basic reality. Ninety-five percent of Americans have had premarital sex, but four out of five American adults have been married at some point in their lives.

Of course, there's very little empirical research on the question of whether or not women will shun marriage unless their only other option is to starve. That said, the existence of the wedding industry and all the sentimental claptrap around weddings that is served to and eaten up eagerly by a mostly female audience suggests that there is some draw there amongst the American female populace.

Which, in turn, suggests that single women aren't so much turning their noses up to wedding rings as they just haven't met the right guy yet. Perhaps, just perhaps, a world where economic opportunities are fading and incarceration rates, especially for black men, are high is one where the number of marriageable bachelors is dwindling all the time. If you want women to get married, maybe the solution is to scold them less about what they do in the privacy of their own bedrooms, and start working on an economically viable society that produces men with good jobs and good futures, the kind of men that women are willing to marry.