The "Ghosts of Christmas Past" skit photos were posted to Snapchat 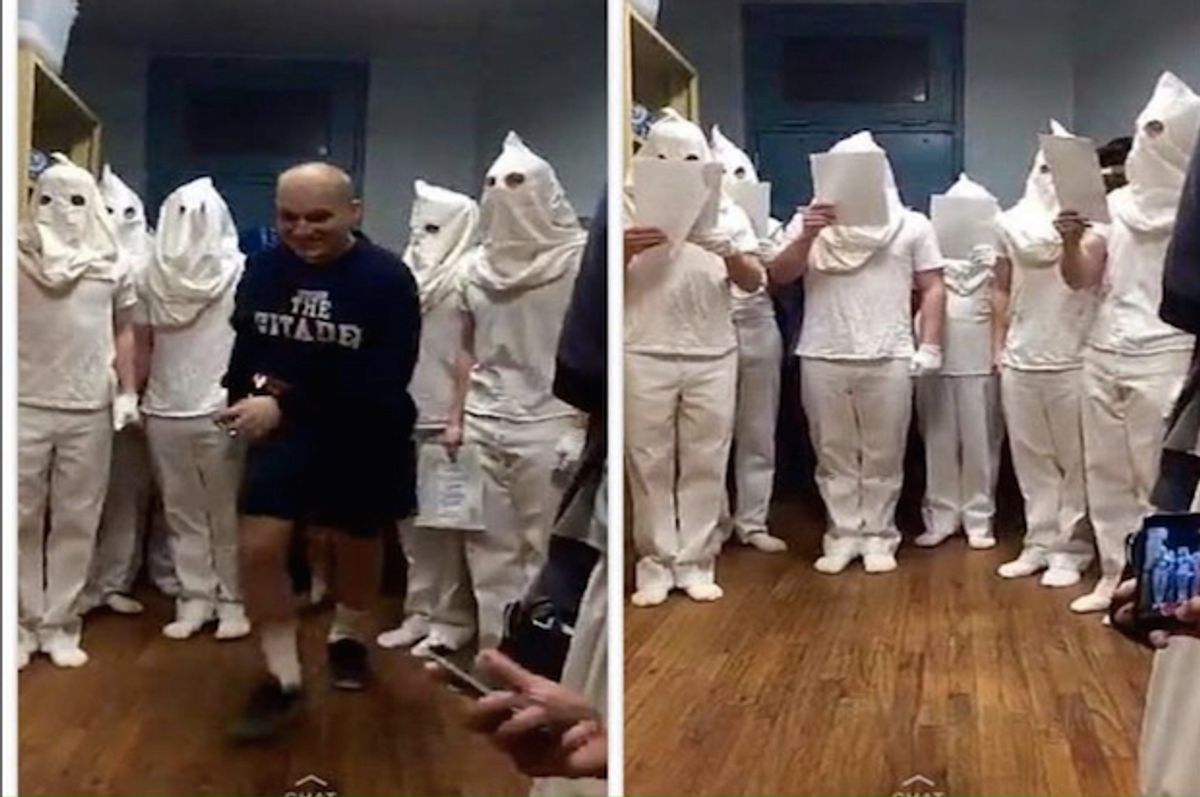 The Citadel, the Military College of South Carolina, was forced to suspend eight cadets on Thursday after photos of an apparent hazing ritual surfaced online showing the cadets donning all-white, with white pillowcases over their heads.

"A social media posting, which I find offensive and disturbing, was brought to my attention this morning," retired Air Force Lt. Gen. John Rosa, the president of the college, said in a statement on Thursday announcing the immediate activation of suspension proceedings for at least eight cadets and investigation into the images.

"Preliminary reports are cadets were singing Christmas carols as part of a 'Ghosts of Christmas Past' skit," he wrote in a Facebook post, adding that the costumes were pillowcases. "These images are not consistent with our core values of honor, duty and respect."

According to Charleston station WCIV, the images were discovered by an African-American woman on the social media site Snapchat.

"I screenshotted and decided to share because I was so offended," she wrote, posting the images to Facebook this week. "Was this their idea of some kind of joke?"  WCIV reports the woman was later "threatened, harassed and offered money from numerous Citadel Cadets to take it offline in order to not 'ruin their lives.'"

As ABC News notes, the Citadel has struggled with cadets donning KKK-like white sheets in the past:

In 1986, five white cadets entered the room of a black cadet dressed in sheets and towels and left a charred paper cross. The black cadet left the college and later about 200 people, many of them black, marched in protest.

The school is only a couple of miles away from the historically black Emanuel African Methodist Episcopal Church where nine people were fatally shot by a white gunman last June and Citadel leaders voted to remove the Confederate flag from the campus chapel shortly thereafter.

Why would anyone think that this is ok? Will the administration at The Citadel let this go? This picture is a disgrace...