Donald Trump's racism is as American as apple pie

Republicans keep saying Trump's ban on Muslims goes against our values. Do they know anything of our history? 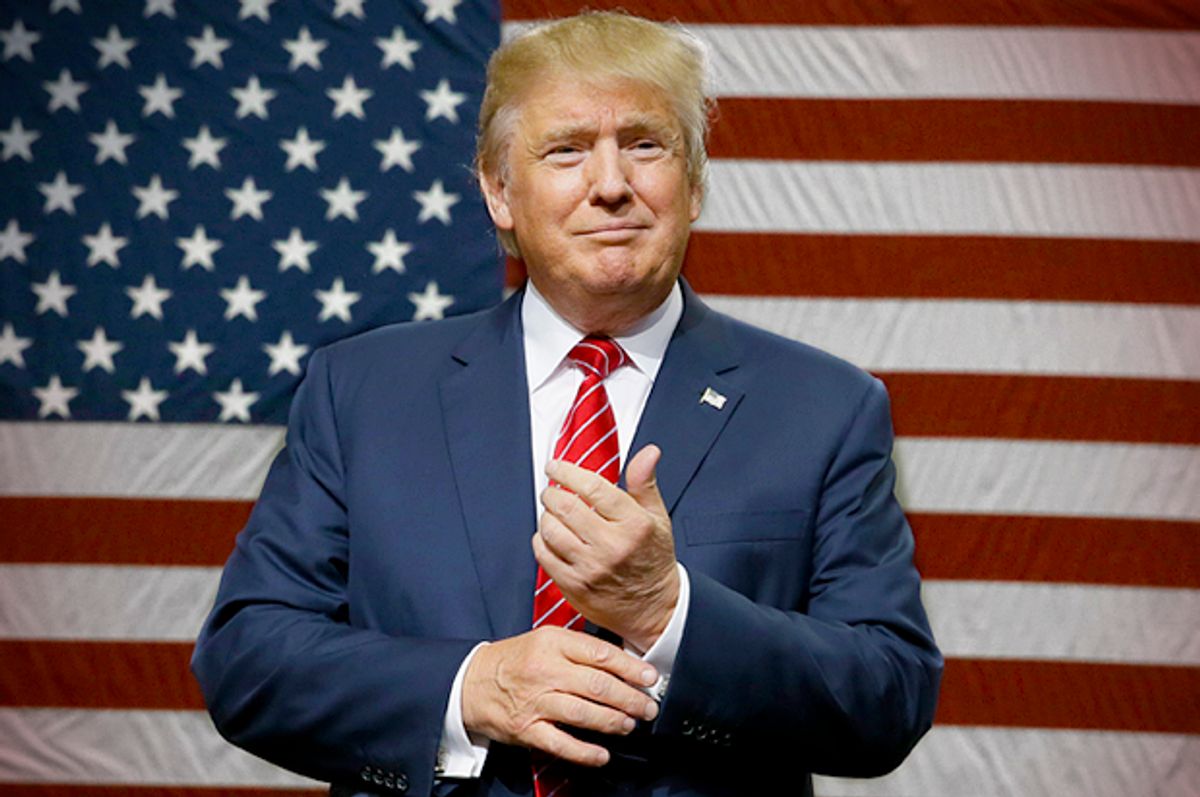 The mainstream political class is aghast at Donald Trump’s bigoted statements about Muslims, Syrian refugees, Hispanics and other people of color.

They have proclaimed that Donald Trump is “un-American” and that his views do not represent “American values.”

No good can come when we lie to ourselves. We tell lies instead of truths because this allows us to emphasize who we would like to imagine ourselves as being instead of confronting who we really are.

Donald Trump’s racism, nativism and bigotry are as American as apple pie.

In total, for 83 percent of its history—from slavery through to the end of Jim Crow—the United States practiced legal white supremacy and racism against African-Americans.

Until 1965, the United States used racist immigration and naturalization laws to maintain its status as a majority “white” country. As legal scholar Ian Haney-Lopez incisively argued in his book of the same title, the United States has historically been “white by law.”

These laws took many forms. The Chinese Exclusion Act of 1882 barred Chinese immigration to the United States. This law also made it illegal for them to become citizens. In 1922, the United States Congress passed a bill that would take away citizenship from any (white) woman who married a person who was not eligible for that status, i.e., “non white.” Two years later, in 1924, the United States Congress would ban people from “less than desirable” races from the country except under a very narrow set of circumstances. And of course, the United States condemned thousands of its own citizens who happened to be of Japanese descent to internment camps in 1942.

The infamous Ozawa and Thind Supreme Court cases reinforced how “Whiteness” and “American” were synonymous. In the majority decision denying Bhagat Singh Thind, a Sikh who lived in the United States and served with distinction in the Army, his naturalized citizenship, Justice Sutherland argued:

What we now hold is that the words “free white persons” are words of common speech, to be interpreted in accordance with the understanding of the common man, synonymous with the word “Caucasian” only as that word is popularly understood. As so understood and used, whatever may be the speculations of the ethnologist, it does not include the body of people to whom the appellee belongs. It is a matter of familiar observation and knowledge that the physical group characteristics of the Hindus render them readily distinguishable from the various groups of persons in this country commonly recognized as white.

The children of English, French, German, Italian, Scandinavian and other European parentage quickly merge into the mass of our population and lose the distinctive hallmarks of their European origin. On the other hand, it cannot be doubted that the children born in this country of Hindu parents would retain indefinitely the clear evidence of their ancestry. It is very far from our thought to suggest the slightest question of racial superiority or inferiority. What we suggest is merely racial difference, and it is of such character and extent that the great body of our people instinctively recognize it and reject the thought of assimilation.

The Thind and Ozawa cases were not legal curiosities or mere exercises in obscure questions of jurisprudence. They denied and stripped away legal protections for entire groups, destroyed lives, the ability for a person to earn a fair wage, and to protect their property. Takao Ozawa killed himself after he suffered the ignominy of being denied by the United States Supreme Court and rejected by the country he loved. His suicide is a testament to the power of those legal decisions that tried to keep America a country that was white by law.

Nativism and xenophobia are not limited to the demagoguery of Republican carnival-show barker professional wrestling wannabe reality TV show hosts who want to be president of the United States.

Benjamin Franklin, American diplomat and one of the “Founding Fathers” of the United States, was deeply concerned about how immigrants from Germany could potentially ruin the country.

"Those who come hither are generally of the most ignorant Stupid Sort of their own Nation…and as few of the English understand the German Language, and so cannot address them either from the Press or Pulpit, ’tis almost impossible to remove any prejudices they once entertain…Not being used to Liberty, they know not how to make a modest use of it…I remember when they modestly declined intermeddling in our Elections, but now they come in droves, and carry all before them, except in one or two Counties...In short unless the stream of their importation could be turned from this to other colonies, as you very judiciously propose, they will soon so out number us, that all the advantages we have will not in My Opinion be able to preserve our language, and even our Government will become precarious."

Benjamin Franklin also complained about the Germans that:

[W]hy should the Palatine Boors be suffered to swarm into our Settlements, and by herding together establish their Language and Manners to the Exclusion of ours? Why should Pennsylvania, founded by the English, become a Colony of Aliens, who will shortly be so numerous as to Germanize us instead of our Anglifying them, and will never adopt our Language or Customs, any more than they can acquire our Complexion.

During the late 19th and early 20th centuries, eugenicists operating through organizations like the American Breeders Association strived to maintain the “purity” of the “white race” and to improve its “stock” during an era of anxiety about immigration from Southern and Eastern Europe, as well as long-standing white supremacy and violence against African-Americans and other non-whites.

Madison Grant, one of the most popular and influential “race theorists” of the period, speculated in his widely read 1916 “racialist” tract "The Passing of the Great Race" that:

As to what the future mixture will be it is evident that in large sections of the country the native American will entirely disappear. He will not intermarry with inferior races and he cannot compete in the sweat shop and in the street trench with the newcomers. Large cities from the days of Rome, Alexandria, and Byzantium have always been gathering points of diverse races, but New York is becoming a cloaca gentium which will produce many amazing racial hybrids and some ethnic horrors that will be beyond the powers of future anthropologists to unravel.

Madison Grant’s worries about an imperiled white race and changing demographics echo the collective fears of Donald Trump, his fellow 2016 Republican primary candidates, the GOP base, and the right-wing media about demographic shifts that will supposedly make white Americans a “minority” (which is not true) in their “own” country.

The Know-Nothing Party rose to prominence in the 1840s with a platform that included goals such as “Repeal of all Naturalization Laws”; “The amplest protection to Protestant Interests”; and “None but Americans for office.”

More than 100 years later, Donald Trump and his fellow Republican candidates agree with much of the Know-Nothing platform. Such an overlap is fitting, as today, conservatism means picking ideas and policies from the dustbin and political dead ends of American history.

Racially motivated street violence, purges and ethnic cleansing under the flag and banner of fascism are not confined to Europe with its Mussolinis and the singular evil of Adolf Hitler and the Nazi Party.

The Ku Klux Klan was and remains the largest terrorist organization in the United States. At its height, this white Christian organization had millions of members. The Ku Klux Klan and those whites sympathetic to its agenda killed at least 4,000 black Americans by lynching and many more tens of thousands through anti-black terrorism after the Civil War. White mob violence and pogroms--what was American anti-black ethnic cleansing--also destroyed entire black towns and other communities during the 19th and 20th centuries.

Although not as powerful as the Ku Klux Klan, during the 1930s white fascist organizations such as the Black Legion targeted labor organizers, people of color, Jews, Catholics and “Communists” for violence.

And while a black man named Barack Obama may have been elected twice as president of the United States, the Southern Poverty Law Center estimates that there are 784 active hate groups in the country.

Americans are a hopeful people. The arc of history and justice is long. One of the country’s greatest accomplishments has been the expansion of democratic rights and freedoms from a relatively small number of white men at the time of the Founding to almost all citizens today. And as a credit to its power, the victories of the civil rights movement—what was only 50 years ago—are made to feel as though they are permanent, an unbreakable fixture in American life. In reality, the post-civil rights era is very recent; America as a fully inclusive (de jure but certainly not de facto) equal multicultural and multiracial democracy is a new state of affairs in what is comparatively a very young country.

When combined with a belief in American Exceptionalism, a state of selective amnesia is created where too many Americans want to remember the best of what the country is as opposed to taking an honest accounting of both its goodness and shortcomings.

Racism, bigotry and xenophobia are a core part of America’s national character.

We cannot defeat Donald Trump until we acknowledge that fact and own its legacy.