"Pass the Zadroga Act, or I will glue Congress together, dip them in gold and wear them around my freggin' neck!" 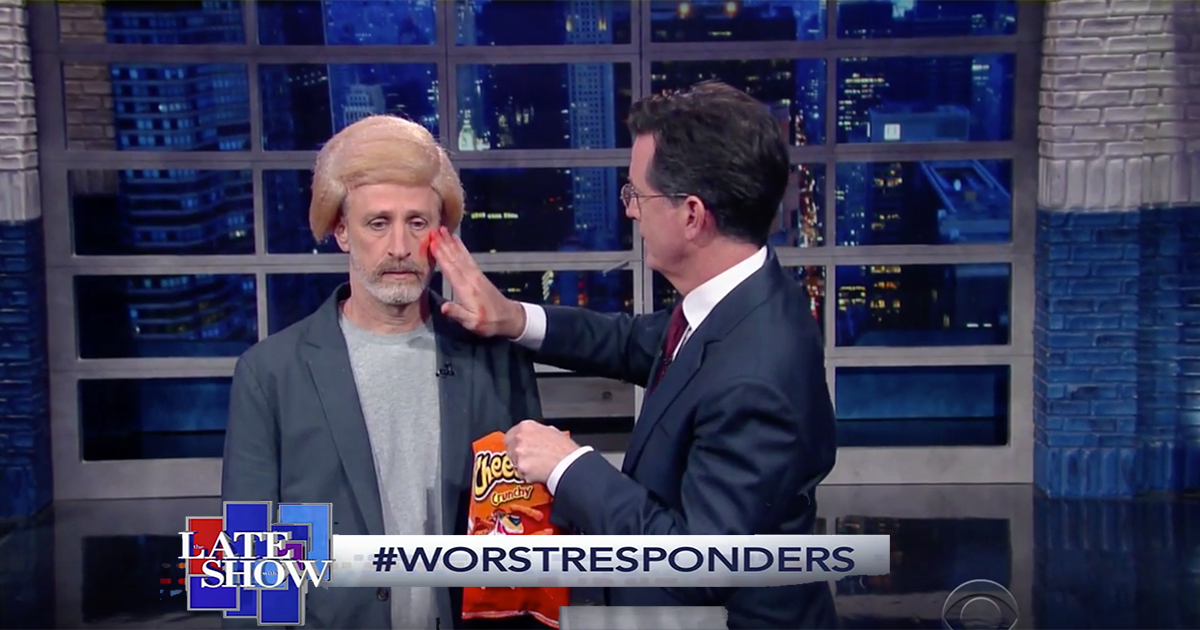 Jon Stewart must be making the rounds on shows he helps produce this week as part of his continued war against Mitch McConnell. You see, Stewart spent last week on Capitol Hill trying to get enough support to get the Zadroga Act passed. It's the bill that would agree to pay for health benefits for the 9/11 survivors who faceg immense health bills due to the work they did on and after 9/11 to help find people. McConnell had promised to put the Zadroga Act in the transportation bill that the Senate passed earlier this week. He didn't, for what Stewart calls "purely political reasons." Colbert thought everyone would want the bill to pass, then stepped back. "Well, everybody human," he said, acidly.

This time, Stewart interrupted his old colleague Stephen Colbert's opening monologue to ask for help on Thursday night's "Late Show." But, politics being what it is, Colbert told Stewart that there was no way the media, not to mention conservatives in Congress, would pay attention to him unless he "Trumps it up a bit." With Colbert's help, Stewart donned a thick, orange-ish combover wig. "I keep this around in case I need to say anything important," Colbert said. Stewart began again, but it wasn't enough. Colbert asked for "some make-up" but was handed a bag of Cheetos. He reached in and swished his hand around a bit before apply some orange to Stewart's forehead and cheeks. Stewart caught himself in the monitor and nearly cracked up but kept it together.

That's when Stewart got down to business by bringing da Trump with a thick New York accent, wagging shoulders and wild gesticulations we've come to love about his classic impressions. "These 9/11 first responders, let me tell ya' something, hey, these 9/11 first responders are the most top-notch, first-class, diamond-encrusted heroes America can produce," Stewart said. "Don't let Congress play politics with this necessary bill. If I'm elected, and I will be elected, I will build a wall around politics and I will make politics pay for it. Tweet at your Congressman #WorstResponders. Tell them Donald said 'pull up your big boy pants and make America Great again. Pass the Zadroga Act, or I will glue Congress together, dip them in gold and wear them around my freggin' neck!"

Stewart is hoping with enough public pressure on Congress they will add the Zadroga Act to the upcoming omnibus bill that has so many riders it's not as if anyone would notice.

The video is a sight to behold, you've got to see it: