Terrifying: Spike in threats and intimidation on women's clinics, activists and doctors by extremist anti-choicers

In the U.S. and Latin America, there's an increase in stalking and intimidating pro-choice activists and doctors 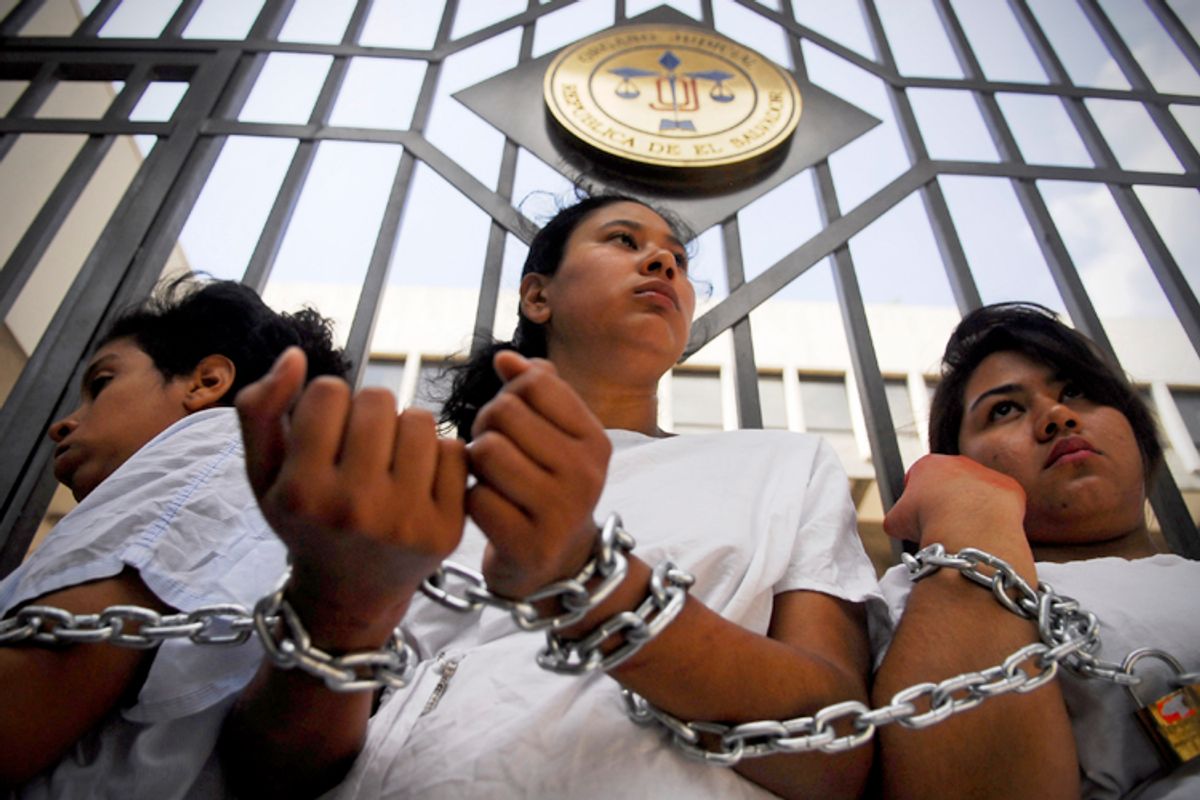 Women stand chained together outside the Supreme Court during a protest in San Salvador May 15, 2013. (Reuters/Ulises Rodriguez)
--

The recent attack on a Colorado Springs Planned Parenthood, where suspect Robert Dear has admitted to murdering three people, was an event that the anti-choice movement is quickly hustling to portray as an anomaly. But the attack is part of a larger pattern of violence and harassment, going on not just in the United States but throughout the Americas, aimed at terrorizing and silencing those who fight for women to have sexual and reproductive autonomy.

It's a campaign of abuse and intimidation whose goal is not, despite hyperbolic rhetoric to the contrary, about "babies," but about crippling women's ability to have sex without fear of punishment or retribution.

Dear, who was muttering stuff about "baby parts" during his initial interrogation this week, seems to have been inspired by a series of hoax videos released over the summer by anti-choice extremists going under the name the Center for Medical Progress. These videos used deceptively edited footage of Planned Parenthood workers to push an urban legend that's been banging around Christian right circles since the days they were panicking about Dungeons and Dragons, that Planned Parenthood was using abortion to collect fetal parts to sell for  profit. The accusations weren't true, as many state and federal investigations found. Now the man behind the videos, David Daleiden, is caught up in a court battle as he desperately tries to hide the details behind his operation.

But while those videos, whose false accusations were widely promoted by nearly every politician in the Republican Party, did cause a noticeable uptick in the number of arsons and other attacks on Planned Parenthood clinics, the fact of the matter was that anti-choice intimidation campaigns have been an ongoing problem for abortion clinics generally. And even before those videos came out, it took a turn towards very personalized threats and intimidation techniques.

In January, the Feminist Majority Foundation published a survey that found that a whopping 1 in 5 clinics had experienced severe violence — blockades, stalking, death threats, physical assaults — in 2014. Even more disturbingly, there was a noticeable rise in personalized harassment of abortion providers. Nearly 28 percent of clinics reported that pamphlets personally targeting doctors and staff were being distributed in the community. Nearly 18 percent reported incidences of anti-choicers putting up personal information and photos of clinic staff on the internet. Over half of clinics reported targeted intimidation of doctors or staff members.

This kind of behavior is clearly a threat. It's one with teeth, too. This kind of obsessive tracking of a doctor's movement is why Scott Roeder knew where Dr. George Tiller, who had security at his house and clinic, would be easiest to get to at his church in Kansas. Which is where Roeder walked up and shot the good doctor in the head.

This December, Mother Jones published an article detailing exactly what lengths doctors have to go to stay safe: Driving to and from work in erratic ways to shake off tails, wearing disguises, flying in from another state so that following you is impossible, meeting staff members in an undisclosed location to be driven into work, often while hiding in the backseat. Being an abortion doctor is like being one of the spies on "The Americans," except, you know, they didn't sign up to live like this. They just want to provide necessary medical care.

What is important to note is that none of these attacks were really about abortion, though that word was flung around a lot. The funding in question is earmarked for contraception, STI services, and well-woman visits. "Abortion" is, as it always has been, just a proxy word for a general hostility towards women being able to have sex on their own terms without being punished.

Why is the hostility towards reproductive health care on the rise like this? The answer might lie in looking beyond the U.S. borders, at Latin American countries that have similarly nasty politics around contraception and abortion.

This week, Amnesty International released a report chronicling the uptick in harassment and intimidation in Latin America towards pro-choice activists. "Scores of women working to promote access to safe abortions, sex education, modern contraceptives and other sexual and reproductive rights across the Americas are falling victim to increasingly vicious smear campaigns and threats geared at halting any debate on the issues," the news release explains.

For instance, in Paraguay, activists working on behalf of a 10-year-old rape victim who was seeking abortion (neither being in elementary school and/or being a rape victim is a good enough excuse to escape your punishment for being a female with female parts in anti-choice eyes) reported that their phones and computers were hacked and that they and their family members are being followed and photographed by anti-choicers seeking to intimidate them.

"In Yucatán, Mexico," the release continues, "a brutal campaign against members of the only organization providing safe and legal abortions forced the vast majority of the personnel to resign."

The tactics of surveillance are popular with anti-choicers in the United States, as well. Part of the reason is that it works; no one wants to be the next Dr. George Tiller. But the tactics are also an extension of the larger goal of the anti-choice movement, which is to end female autonomy and keep women under control of family and church. It's a movement that idealizes the time when a woman was forced to live at home until she married, spending every day until widowhood under the watchful eye of male authority.

But ours increasingly is a world where young women can live without having their every movement is monitored and chaperoned to keep them from having unauthorized sex. In many places, both in the United States and in Latin America, women choose to live alone, to be single for a time if they want, and to have sex for their own reasons, and not just within the bounds of marriage for the purpose of procreation.

It is this loss of control over women's choices and women's bodies that motivates the anti-choice movement. No surprise that anti-choicers are escalating their tactics in response to a rapidly changing world, a world where independent young women are pop idols and everyone under 30 has Tinder on their iPhone. And it's also no wonder that they react to losing control over women by upping the emphasis on surveillance tactics. It's all about that urge to monitor and control, and sadly some people who have those urges tip into outright violence when their targets resist their efforts to dominate them.