"This is half-arsed and half-baked": Why are we still asking countries to reduce emissions -- that's Kyoto all over again

Consensus is growing that a carbon fee is the way to combat climate change. Time for COP21 to get on board 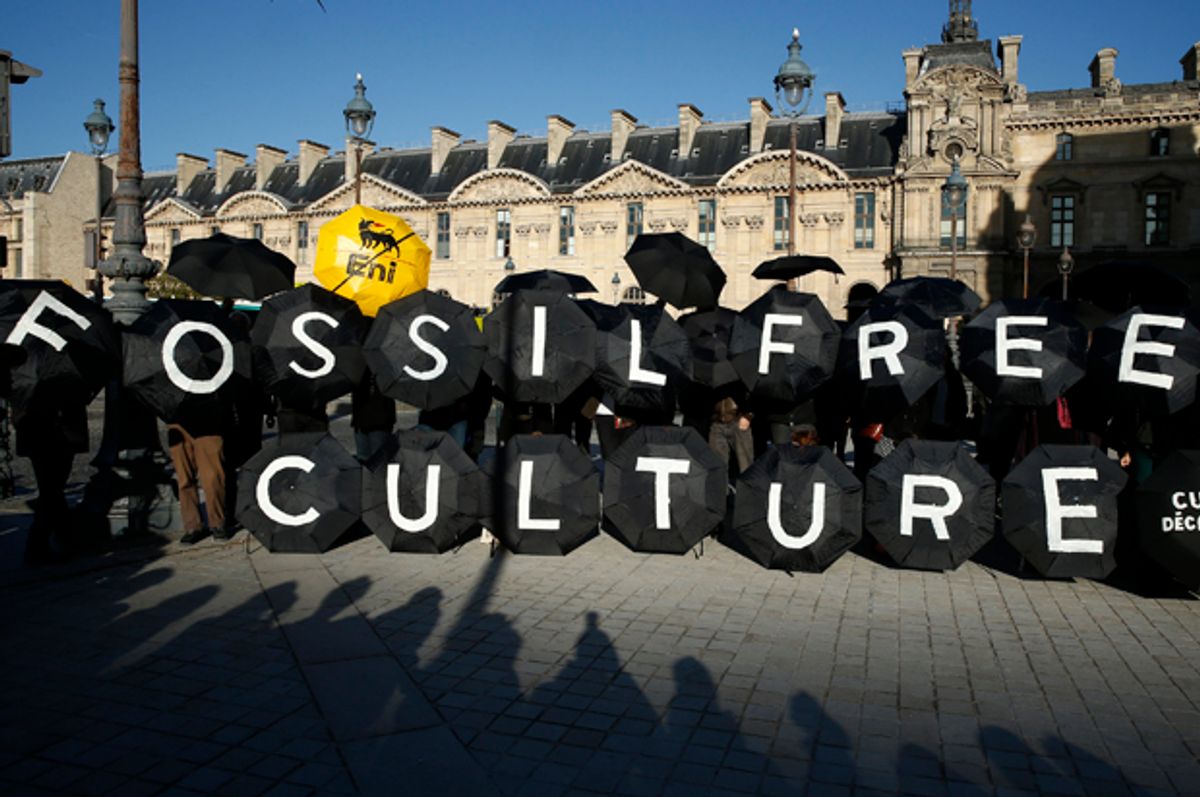 Strange bedfellows alert! What do ExxonMobil, four Nobel laureates, Tesla and SpaceX CEO Elon Musk, Russian aluminum magnate Oleg Deripask and renowned climate scientist James Hansen have in common? They all believe that putting a steadily rising tax or fee on greenhouse gas emissions – with at least some of the revenue used to offset increased energy costs for lower-income households – is the best way to combat climate change.

Throughout the U.N. climate conference in Paris, diplomats, world leaders and CEOs are calling for a clear price on carbon. Already, 90 countries have committed to putting a price on fossil fuels, shifting the debate from if to how carbon will be priced. Calls for carbon fee plans are rapidly gaining ground over older emissions trading systems (ETS), also known as a cap-and-trade programs.

The Problems With Emissions Trading

The theory behind pricing carbon is simple: Increasing the cost of fossil fuels will make renewable energy sources more competitive.  People will respond and buy the less expensive option. Many policymakers still think of cap-and-trade as the primary way to price carbon, because in 1997 a central feature of the Kyoto climate treaty was its requirement for countries to cap or reduce their greenhouse gas emissions.  Kyoto promoted ETS and its Clean Development Mechanism as a way for developing nations with fewer emissions to sell certificates to allow industrial nations to offset their carbon pollution and meet their emissions cap.  The greater the demand for offset certificates by industries, the more they were supposed to cost, thereby increasing the cost of carbon. But in most instances the markets haven’t worked too well.

Ángel Gurría, secretary-general of the Organization for Economic Co-operation and Development, speaking at the Paris launch of the Carbon Pricing Leadership Coalition, said, “Practically all of the other ETS [programs], including the seven pilots in China and [the] four times that we have attempted…in Europe, we have not been able to make it.  We already know that taxes seem to work better than the ETS system.”

Marc Breslow is the co-director of ClimateXChange, an organization working to pass carbon fee and rebate legislation in Massachusetts. In an interview he said that a decade ago he was “one of the main advocates” of the Regional Greenhouse Gas Initiative (RGGI), a cap-and-trade program in the Northeastern U.S. Although he supports both means of reducing greenhouse gas emissions, he believes that a carbon fee “is simply more straightforward ... Running the periodic auctions of emission allowances is complex.” The auctions create “all kinds of speculation and people being forced to guess what future prices of emissions permits are going to be ... A fixed price enables businesses and consumers to plan better.”

Breslow is also concerned that ETS can allow emission trading offsets. “In Europe it’s been a disaster.” He said that a large fraction of the offsets in the European Clean Development Mechanism, mostly done in the third world, “are bogus.” He added, “It requires a huge amount of effort” to make sure the offsets “are really worthwhile, principally because for every offset you need to ensure it meets a variety of criteria. The most difficult one is conditionality, a jargon term for 'would this have happened anyway' if you weren’t paying for it specifically as an offset. Would people have planted some trees or not cut down some trees anyway?  [Determining conditionality] is very difficult and requires a lot of expensive monitoring.”

Brent Newell, legal director of the Center on Race, Poverty & the Environment, works with environmental justice organizations that are opposed to California’s cap-and-trade program. California’s plan primarily regulates emissions at power plants, cement plants and refineries. According to Newell, they believe it “denies the communities living near those facilities the benefits of direct emissions reductions.” Newell said people do not consider there are other pollutants besides CO2 that come out of these plants that are toxic and have serious health implications on nearby communities. This could include asthma, cardio-pulmonary diseases and cancer. “If you’re breathing and live near one of these facilities you are being negatively affected,” said Newell.

Newell is not alone in his concern for how emissions trade schemes impact the poor. In his recent encyclical Pope Francis says that the “strategy of buying and selling carbon credits can lead to a new form of speculation which would not help reduce the emission of polluting gases worldwide. This system … may simply become a ploy which permits maintaining the excessive consumption of some countries and sectors.”

There is a rapidly growing movement to implement carbon taxes or fees as an alternative to ETS. James Hansen, a former NASA scientist, gained fame when he warned the U.S. Congress in 1988 that global warming had already begun and was a grave threat.  Speaking in Paris, he said he was hearing “the same old thing as Kyoto [in 1997]. We are asking each country to cap emissions, or reduce emissions. Why are we talking about doing the same again? This is half-arsed and half-baked.”

Hansen believes that the way to dramatically reduce greenhouse gas emissions is to put a steadily rising fee on carbon, with the money raised given back to the public as dividends. He said, “Studies show that if you added $10 a ton to the price you would reduce [fossil fuel] energy use by 20 percent in 10 years, and 50 percent in 20 years. This is the only viable international approach. You cannot ask 190 countries to individually limit their emissions.

“All it requires is two players: United States, China or the European Union – two out of the three. They would say we’re going to have a [carbon] fee and we’re going to put border duties on products from countries that don’t have it. The other party would join immediately, and so would most countries, because they would rather collect the money themselves.”

Hansen added, “It’s not too complicated. It’s not that the problem cannot be solved but that it is not being solved. We need an honest, simple rising carbon fee.”

The most vocal proponent of carbon fee and dividend is Citizens Climate Lobby (CCL), a grass-roots advocacy group that has been growing by leaps and bounds. You can think of its plan as a three-legged stool: 1) Put a steadily rising fee on U.S. greenhouse gas emission at the source (wellhead, mine, etc.); 2) distribute all of the revenue collected equally to U.S. households to compensate for a rising cost of energy; and 3) impose a border adjustment fee on products entering the U.S. from other countries that do not put a price on carbon. This will protect U.S. jobs and incentivize other countries to adopt similar plans.

In 2010 when CCL held its first conference in Washington, D.C., it had 12 chapters.  It now has 310 chapters and more than 23,000 supporters.  It is rapidly approaching its goal of having a group in all 435 congressional districts. To date in 2015, its members have published more than 3,000 letters-to-the-editor and Op-Eds and have lobbied senators, representatives and their staffs close to 1,200 times.

One of the reasons CCL stands out from other environmental organizations is that it acknowledges that a U.S. climate change solution must be supported by Republicans and Democrats, and it is willing to do the hard work of bringing Republicans on board first.

Mark Reynolds, CCL’s executive director, said, "We're seeing a lot of opposition to the president's Clean Power Plan among congressional Republicans. That's understandable, because conservatives want less regulation, not more. But they can't just say "no" to EPA regulations without having an alternative plan to cut greenhouse gas emissions. The conservative alternative they should embrace is the market-based approach of a revenue-neutral fee on carbon.” He added, “If we give all the money back to households, we'll actually add jobs to the economy while we're cutting carbon." The Washington Post, in an editorial, agreed with Reynolds' position, saying a carbon tax is “an elegant policy Congress could immediately take off the shelf.

It might take a few years to legislate a national carbon fee, but activists aren’t waiting for Washington to act. Environmentalists and businesses are forming coalitions at the state level. Breslow noted that in additions to Massachusetts, serious campaigns are underway in Rhode Island, Oregon, Washington state and Vermont. Efforts are also beginning in Minnesota, New York and Pennsylvania. Organizers are racing to see who gets their legislation adopted first.

Regardless of the outcome of the Paris COP21 meeting the message is clear: If you want to prevent rising sea levels, become part of the rising tide of political support for a revenue-neutral carbon fee.

Don Kraus is a senior fellow at Citizens for Global Solutions and a member of Citizens Climate Lobby.