What can we learn from the Greek defeat? The global struggle against austerity reaches the screen 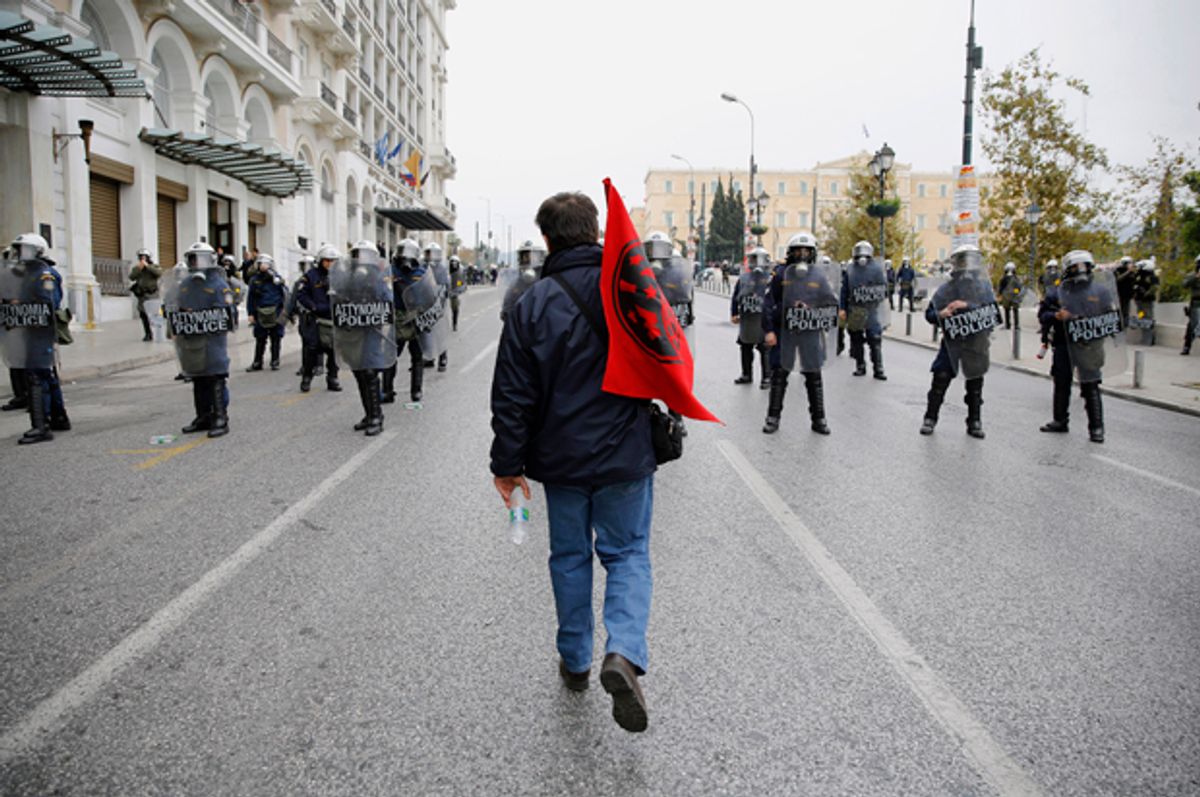 During last summer’s anti-austerity protests in Athens, a Greek TV reporter doing a live stand-up observes the interesting fact that many of the homemade signs are in foreign languages and clearly aimed at a global audience. She stops one protester carrying a sign in German and asks him what it says. He tells her. It says, “Angela: Suck our balls!”

That’s hardly a respectful message to direct at the eminent world leader who has juggled multiple overlapping crises throughout 2015 and was just named Time’s Person of the Year. (I have to agree with Donald Trump on that one, by the way. He had far more global news impact than Angela Merkel did, and nobody ever said the POTY had to be a positive role model.) And no doubt it contains an element of misogyny – shouldn’t European Commission president Jean-Claude Juncker have been invited to pleasure the Greek people in that manner as well? But honestly, when you see what happened to Greece this year laid out in the four-part online series “#ThisIsACoup,” an urgent and riveting work of activist journalism, you can’t blame the guy.

Books will be written about the Greek crisis of 2015 and films will be made, and many of those will be more thorough, more balanced and more analytical than “#ThisIsACoup” even tries to be. But if the classic task of journalism is to write the first draft of history, director Theopi Skarlatos and producer-narrator Paul Mason have done so in electric lettering. They had remarkable access to struggling Prime Minister Alexis Tsipras and other leading figures in Syriza, the left-wing coalition that took power last January on a promise to reject the regime of relentless fiscal austerity imposed by Merkel and Europe’s central bankers.

As we know now, it didn’t work. Even after Greek voters overwhelmingly rejected a new bailout from Brussels that would have entailed another round of budget cuts and tax increases, and even after the Syriza government pushed right to the brink of “Grexit,” or Greek withdrawal from the euro, the final deal was almost exactly what Europe’s bankers and bureaucrats wanted all along. Greece wound up once again sucking Angela Merkel’s balls, in other words, and the question of whether things could have turned out differently, or how, cannot be answered in a mini-documentary that is barely an hour in all. Maybe Grexit would have been preferable to more bullshit austerity – it would certainly have been more exciting – but Merkel and Juncker obviously convinced Tsipras otherwise during the final negotiations. (The four episodes of “#ThisIsACoup,” which range from 13 to 18 minutes in length, will stream on the Field of Vision site beginning Dec. 15.)

Skarlatos and Mason follow a handful of characters through the Greek crisis, and Tsipras, the handsome Syriza figurehead who seems increasingly overwhelmed by events, is arguably the least of them. A dockworker, a theater actress, a firebrand journalist and a human-rights lawyer turned M.P. all provide their perspective on the unfolding drama, in which the upsurge of idealism and optimism provoked by the most radical government elected in Europe since at least the 1930s collapsed into gloom and resignation inside eight or nine months. Most would agree with the journalist’s summation that, in retrospect, the agenda of Merkel and the bankers was clear: They did not respect democracy and did not care about helping the Greek people; they wanted to punish noncompliance and destroy Syriza, as a warning to other would-be rebels.

In a strange but powerful coincidence, a similar message comes through in an ambitious cinematic work from the other side of Europe that, at least in aesthetic and narrative terms, could hardly be further away from “#ThisIsACoup.” If Angela Merkel is not enjoined to suck anyone’s balls in Portuguese filmmaker Miguel Gomes’ three-part saga “Arabian Nights,” there is nonetheless an episode in which an African shaman lures Europe’s bankers and enforcers away from austerity politics by endowing them with permanent erections. (One asks another whether they will be fired by their Brussels bosses for their disobedience and licentious behavior. “Most probably,” says his friend. “But who gives a shit?”)

At more than six times the length of “#ThisIsACoup,” Gomes’ endlessly digressive miniseries or manifesto or movie or whatever it is has lots of other stuff too: A talking rooster with an urgent message for the Portuguese people, a medical clinic inside the belly of a whale, and a hilarious judicial proceeding that begins with a straightforward case of theft and ends up involving a spectral cow, a deaf woman, a Chinese billionaire, a gang of repentant criminals in tribal masks and a genie out of a lamp, who explains that he is really a good genie but has been enslaved by an evil man. I think we all know the feeling!

Portugal has not made worldwide headlines the way Greece has, but along with Italy, Spain, Ireland and other E.U. nations hit hard by the crash of 2007-2010, its people have been subjected to several years of the same supposedly beneficial medicine, in which social services have been slashed, taxes have gone up and jobs have disappeared by the thousands. Gomes’ freewheeling adaptations of several of Scheherazade’s tales from the Islamic Golden Age anthology “One Thousand and One Nights” are meant to capture the pathos and absurdity of Portugal’s current predicament, not to build a coherent political case. (It may be pure accident that Gomes is drawing upon the Muslim world’s greatest work of folklore, but if so it’s a glorious and timely accident.) I’m deeply grateful that I saw “Arabian Nights” and “#ThisIsACoup” in the same week, because each answers questions posed by the other.

Apologists for the neoliberal poison pills will of course pull on their chins and announce that they know they are making the patient sicker for the moment, but that only this short-term pain can ensure long-term growth. What did all these non-German countries expect, when they ran up huge debts to pay for foolish things like decent living standards for senior citizens, or free education and healthcare for all? Those questions require more unpacking than either of these works can provide, but the radical lawyer-turned-legislator in Greece reminds us that framing them that way involves numerous assumptions that have not been proven and may not be true.

Did Greece and Portugal really go broke because they spent too much on social services? Or did that happen because local elites embraced the entire Merkel-nomics package of privatization, globalized “free trade” and foreign investment, with disastrous consequences? It is demonstrably true that most of the billions of euros in bailout funds provided to the struggling E.U. nations have gone toward propping up the banks, remunerating outside investors and making interest payments on the bailout debt itself. Syriza was in the position of a little kid in a gangster movie, receiving a jovial beat-down after telling the Mafia loan shark to leave his family alone.

One can make a coherent argument that such debts are not just politically undesirable and morally indefensible but that in practical terms they benefit no one – except, of course, the bankers and the system of ideological and economic tyranny they represent. Not that Americans have any basis for feeling superior about this stuff: As this week’s big Hollywood release “The Big Short” makes clear, we all went along with the government’s brilliant plan to bail out the cartel of gangsters who stole our money by the trillions, and then to let them keep running the economy as long as they promised, cross their hearts, not to do the exact same thing again. We need our own Syriza movement, or at least our own prophetic talking rooster. Instead we have Donald Trump.

"#ThisIsACoup" will stream in four episodes on Field of Vision, beginning Dec. 15. "Arabian Nights: Volume 1, The Restless One" is now playing at the Elinor Bunin Munroe Film Center in New York, with Volume 2 opening this week and Volume 3 opening Dec. 18. The trilogy will then tour the country, playing Jan. 14-21 at the Harvard Film Archive in Cambridge, Mass., Jan. 23 at the Cinematheque in Madison, Wis., Feb. 4-7 at the Cleveland Cinematheque, Feb. 5 at the Walker Art Center in Minneapolis, Feb. 19 at the DeBartolo Performing Arts Center in Notre Dame, Ind., and Feb. 19-24 at the SIFF Center in Seattle, with more cities and home video to follow.