Geek food for the geek soul: "As society gets increasingly secular, we need to fill the social void"

Salon speaks to the Kitchen Overlord about recipes inspired by "Dune," Tolkien and Dr. Who 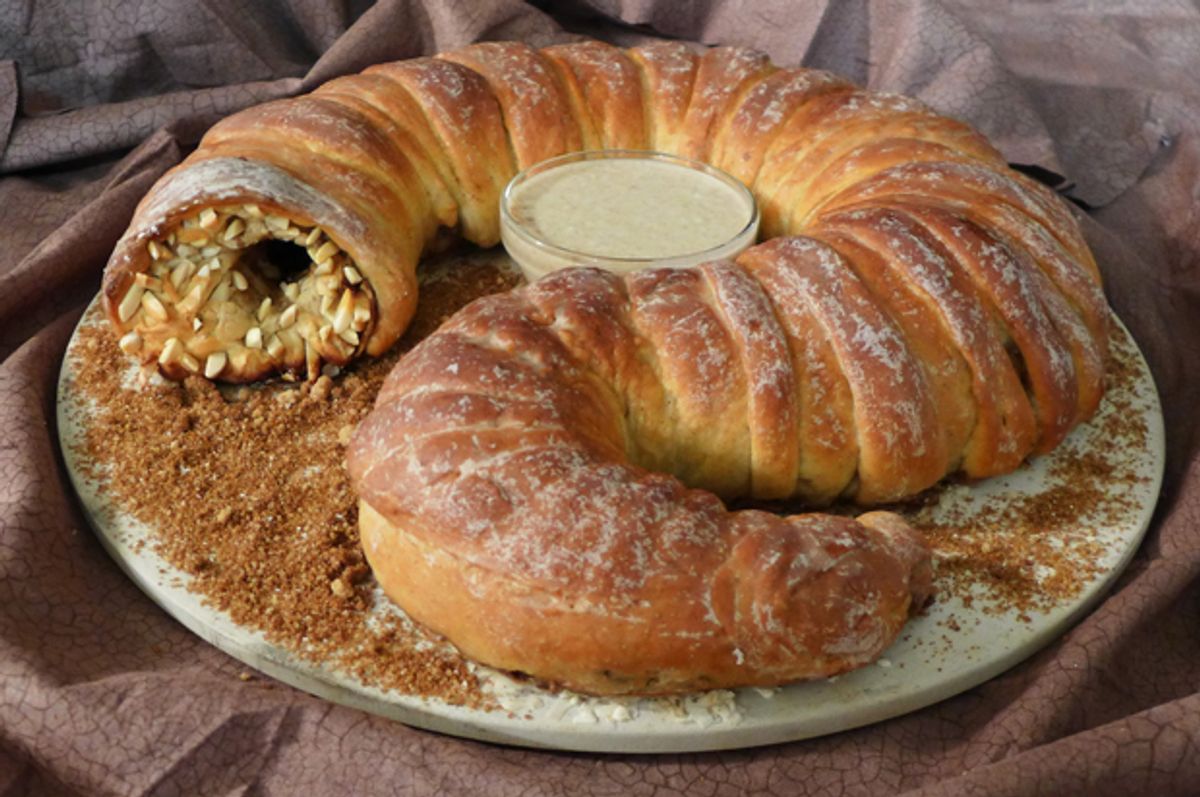 It’s one of those ideas that seems inevitable when you hear it: cookbooks based on classic works of science fiction and fantasy. Okay, maybe not quite inevitable, but recipes like Spice-Stuffed Sandworm Bread – inspired by the Dune universe – or Superman sandwich bread will make sense to many of the geeks in your life.

These and other creations are the masterwork of freelance writer Chris-Rachael Oseland, who runs the Kitchen Overlord blog, “Your home for geeky recipes, edible art, and nerdy kitchen gadget reviews.” Her cookbooks include “Dining with the Doctor” (recipes inspired by Dr. Who), “An Unexpected Cookbook: The Unofficial Book of Hobbit Cookery,” and “Wood for Sheep” (based on the cult board game Settlers of Catan.)

Oseland will bring out a second edition of her Dr. Who book next year, as well as “Geek Breads,” which includes the "Dune" recipe. If you've seen the image of a "Dune" sandworm made of bread that went viral last week, that's her work.

We spoke to Oseland from her home in Austin. The interview has been lightly edited for clarity.

So, where did you get the idea for these recipes? Do you remember the first fantasy- or science-fiction-inspired thing you ever made?

The first book I published, which kind of got me started on this, was “SteamDrunks: 101 Streampunk Cocktails and Mixed Drinks"… It was basically to shut up a lot of my steampunk friends, who’d bring a bottle of absinthe to a party and be like, “This is just like what they were drinking in the 1890s!”

I have a masters in history: “No, it’s not. Even Byron didn’t drink that stuff straight!”

So it started off as a research thing — to see what they were really drinking. As a historian I wanted to go down that rabbit hole.

So it came out of your interest in history, more than fiction or something?

Yes – and I think that’s reflected in most of my cookbooks. “An Unexpected Cookbook,” my hobbit one, is a straight-up history cookbook: It’s all recipes from Tolkien’s childhood in the 1890s.

I’m doing the same thing with my Dr. Who cookbook – anytime where they go back in history, it’s an excuse for me to tuck in a few historical facts… I feel this obligation to make sure I’m historically accurate with these things.

Do you remember the first thing you cooked or baked based on fantasy or science fiction?

I’m a second-generation geek: My mom started taking me to conventions when I was knee high. So I’ve grown up immersed in all of this. For me there’s always been nerdy food around. If you go to a science-fiction convention, people are gonna bring something iconic just for fun. These are the people I grew up around.

Besides your mother’s connection, tell us a little about your interest in fantasy and science fiction. How early did it start, and what books and writers did you get into?

I literally can’t remember a time when there wasn’t something fantasy or science-fiction going on around my house.

We didn’t have cable, so there was a whole lot of “Star Trek” on PBS… We went to the library a lot. When you’re young and poor and you’re not buying a lot of things, being able to get something new all the time is really great. Taking away my library card is one of the worst punishments anybody could have offered me.

“Dune” obviously is one of the ones that hit me early. I remember reading it in fourth grade.

Which of your recipes have become the most popular? Are you able to guess which ones will break out, or does it sometimes surprise you?

This one shocked me – flat-out shocked me. The [Sandworm bread recipe] is two years old. But I posted a new photo of it because it’s a great recipe! It impresses when you bring it to a party – among nerds.

Because it had been there for two years, I had zero thought that it would create the majority of traffic to my site. And because it’s a giant cinnamon role with some almonds shoved in the front… I’ve got some fairly technically difficult things that I think are awesome that people are just like, yeah, that’s cute.

The things I know will be popular are tied into a currently popular kind of fandom and are kind of iconic. Like the second edition of my Dr. Who cookbook has a couple that will become insanely popular… I’ve got for example a Pop TARDIS recipe. They’re basically Pop Tarts that look like a TARDIS [the time machine from “Dr. Who”]… If that doesn’t become ridiculously popular next summer, I will be shocked.

The Dune sandworm… I have no idea why it became so popular – that one shocked me.

A lot of what you do seems to be reducing complicated ideas to something simple that amateur cooks can execute… So how does your thought process work for something like the Superman bread?

These days I am – no joke – if I am watching something popular, I’m looking for the geometry of it. Honestly, when I am at the grocery store I am the queen of practical geometry. So if you really boil down Superman’s crest, what have you got? You’ve got three horizontal red lines, two horizontal yellow lines, and a blue box. How do you make that? Sandworms – that’s a tube with teeth on one end.

Can I throw one last thing in? I feel like part of the reason this has become so popular is that as society gets increasingly secular, we need to fill the social void that’s been vacated by religion. Not the spirituality part. Just the getting together with other human beings part. So people who haven’t set foot in a church in years are going to get together every week to watch “Game of Thrones.”

And when they do, they’ll go through the exact same rituals you’d be going through in a religious service 5,000 years ago. You show up, you bring an offering of some sort… You have some kind of food, or snacks… You enjoy the sermon, or the episode, you have a discussion about it. And then you do it again next week. This is no different, on a sociological level, from a religious service. And there’s nothing wrong with it filling that social void. People are herd animals. “You’re our tribe? Gotcha.”