The air went out of Ben Carson: Race, the right, and the fall from front-runner to afterthought

Ben Carson stood center stage not so long ago. What does his collapse say about Republicans and race? 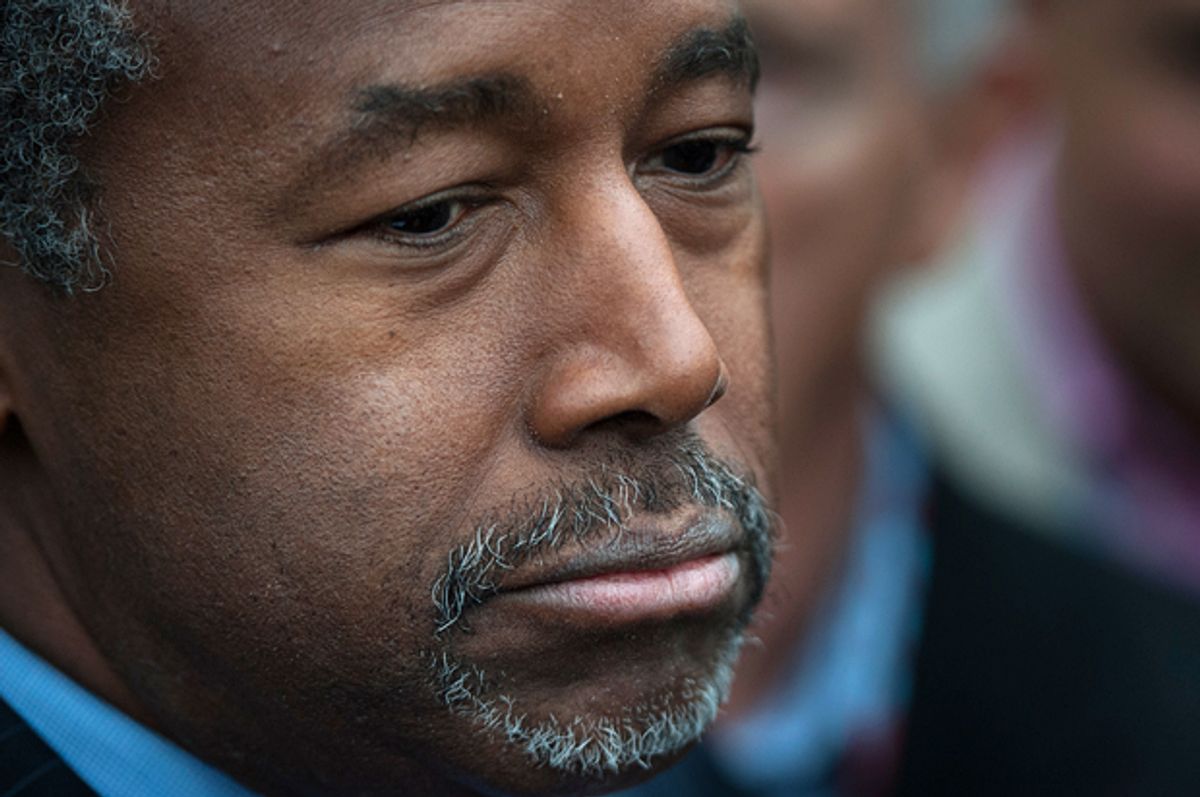 If “all the world’s a stage, and all the men and women merely players,” then Ben Carson was, for a moment, one of its master performers.

He was the front-runner for several months during the 2016 GOP presidential season. Ben Carson is now free-falling in the polls. Carson’s gaffes and ignorance have overridden his appeal for white conservatives in his role as their new “best black friend” and human shield against the (obvious) charge that his supporters are racists.

Ben Carson fantasies garnered him support among evangelical movement conservatives. And as with most fabulists, the con has finally been exposed. His decline in public opinion polls is a direct consequence of that halcyon haze wearing off among the Republican base.

Ben Carson is a child of American popular culture. He crafted his exaggerated and ridiculous personal mythology from those shared stories and references.

Carson’s stories are first and foremost grounded in how “It’s not a lie if you believe it.” This is the life mantra of George Costanza, one of the main characters on the hit "Seinfeld." It is shared by Ben Carson.

For example, the website Politifact has ranked most of his claims as lies. Carson’s book “Gifted Hands” is marketed as an autobiography, but journalists have discovered it is rife with half-truths. Perhaps Ben Carson is also inspired by the Seinfeld character J. Peterman, who purchased the life stories of Kramer for $750 and then proceeded to tell them as his own.

"The Education of Sonny Carson" was a 1974 autobiographical film based on a best-selling book of the same title. Besides sharing a surname, the movie’s plot is eerily similar to Ben Carson’s now discredited story of his upbringing as a “ghetto” youth in inner-city Detroit.

In the movie, the main character joins a gang, commits robbery, goes to jail and then finds redemption by working as a community activist.

In his book, "Gifted Hands," Ben Carson told stories of his violent impulses, where as a teenager he tried to kill a friend with a knife, threatened his own mother with a hammer, was running amok in the streets and then found “salvation” by praying in a bathroom. This was Ben Carson’s Road to Damascus moment. The young thug wannabe Sonny Carson was thus replaced by the sleep inducing, studious, peaceful and kind “new” Ben Carson.

Ben Carson has chosen to use rap music to appeal to African-American voters. One of his campaign spokespeople described the choice as follows:

“Reaching [black voters] on a level they appreciate and follow and see if we can attract their consciousness about the election,” Carson campaign spokesman Doug Watts told ABC News. “They need to get involved and express their voice through their vote.”

Carson’s rap campaign song is insulting to black voters both on an aesthetic level and because of its premise.

Black voters have rejected Ben Carson and the Republican Party not because of unreflective emotion or an inability to comprehend the specifics of public policy. The reality is precisely the opposite: black voters are extremely sophisticated. They understand that the Republican Party practices white identity politics, cultivates white racial resentment and seeks to undermine the life chances and voting rights of non-whites.

GOP primary voters skew older than the party’s general electorate.  This cohort likely has fond memories of the landmark 1980s TV show "Benson," which featured actor Robert Guillaume and revolved around the rise of an African-American from butler to gubernatorial candidate.

While Robert Guillaume was very conscientious about how black actors were depicted on television, older white Republican voters are likely very enamored with a TV character that they misperceived as being extremely passive, compliant and submissive to white people. Implicit bias and the subconscious hold great sway over the behavior of (white) voters. Could it be that Ben Carson is somehow associated with the agreeable and affable black TV sitcom character Benson in the minds of his public?

Ben Carson, like other black conservatives from the Reagan-era onward, is a professional “best black friend” for the Republican Party. In that role, Carson and his ilk can say profoundly racist and derogatory things about black Americans, such as how the latter are dumb, stupid, stuck on a plantation, ignorant, lazy, have “bad” culture and only vote for Democrats to get “free stuff.”

As human props, black conservatives do the day-to-day work of white supremacy in the Age of Obama and the post-civil rights era, as they strive to distract from how the Republican Party is the United States’ largest white identity organization.

With his extreme fantasy life and what appears to be a cognitive break from reality, Ben Carson is an African-American version of American humorist James Thurber’s character Walter Mitty. As featured in a New Yorker short story published in 1939, Walter Mitty was a man who lived a mundane life but, to compensate, imagined all manner of heroic scenarios:

In the decades since, "Walter Mitty" has entered the lexicon as shorthand for political ridicule — he's even in the Merriam-Webster Collegiate Dictionary. It defines him as "a commonplace, unadventurous person who seeks escape from reality through daydreaming."

But that's not the impression you get as Thurber's tale begins with the words "We're going through!" It's a voice Thurber compares to "thin ice breaking," the voice of a fearless naval flight commander. Mitty is in "full-dress uniform," with a "heavily braided white cap pulled down rakishly over one cold gray eye." The commanders' crew members are clearly frightened by an approaching hurricane.

At this moment of triumph and vindication, Mrs. Mitty's voice breaks in to chastise the commander with the words, "Not so fast! You're driving too fast!"

Thus yanked from his reverie, Mitty briefly returns to the humdrum world happening outside his head, then lapses back into a series of other fantasies invariably starring himself as the hero.

Like Walter Mitty, Ben Carson has conjured up an equally rich dream world where he saved white classmates from rampaging black hordes during the 1968 riots, earned a scholarship to West Point, stood up to a gunman at a Popeye’s fried chicken restaurant, had angels visit him during his dreams to give him answers to a test, commissioned a painting with Jesus Christ and was featured in Yale University’s newspaper as one of the school’s “most honest” students.

It would seem that Ben Carson is a type of Renaissance Man, an actor-politician-surgeon-performance artist for contemporary American politics and a Republican Party that is utterly detached from reality. Ben Carson believes his own lies and fantasies. His movement conservative public is committed to believing such delusions, about Carson and about other matters of politics, life and society.

It is clear that Ben Carson is more than qualified to be either a reality TV show or improvisational comedy star. Should Ben Carson be president of the United States of America? Absolutely not. Ben Carson’s fantasies would be the ruin of all the people who live in the world as it is, as opposed to the delusional one that Carson and his Republican supporters have imagined for themselves.