We are addicted to war: The simple statistics that help explain how the world views America

Americans like to call themselves a "peace-loving nation." The numbers show that's not actually the case 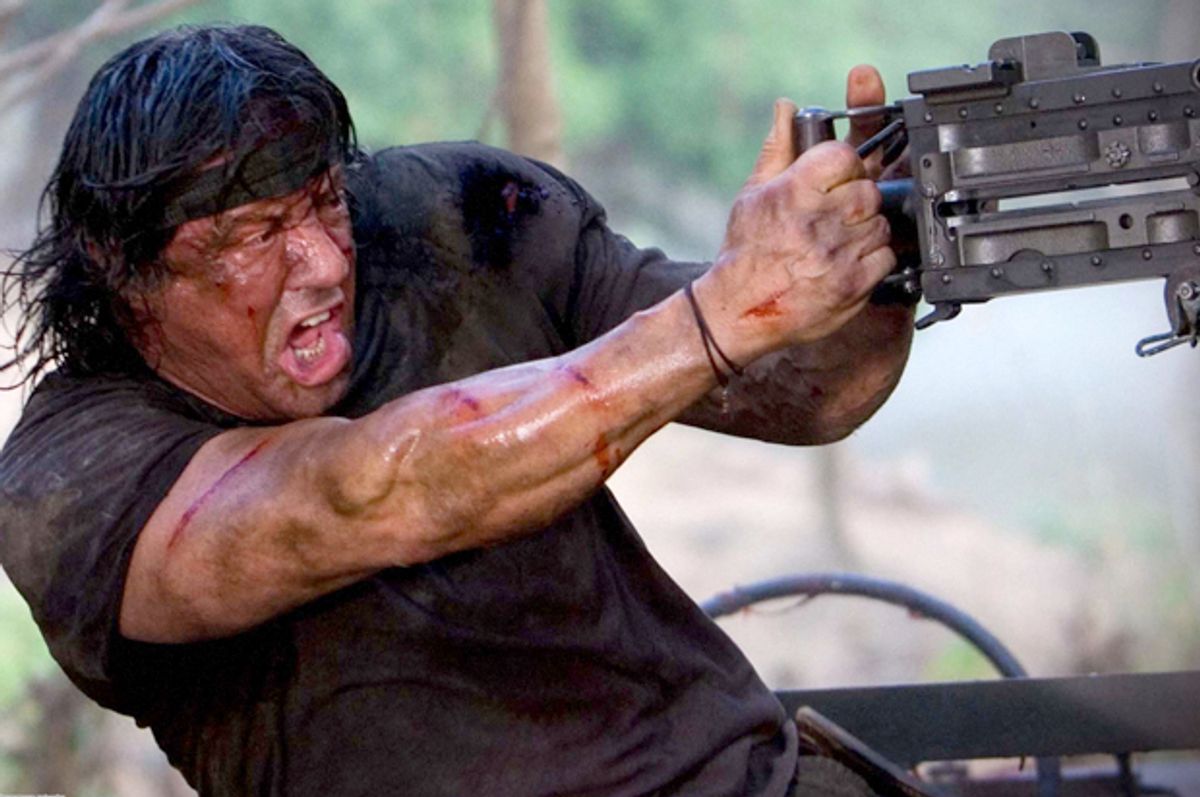 Some countries rarely, if ever, go to war (Switzerland, neutral for centuries, even stayed out of World War II); others go to war--or at least battle--frequently. Although the U.S. rarely declares war, we are stand among the leaders of the second camp.

But today, we clearly stand alone as No. 1: In early 2014, Nick Turse reported in The Nation that “In 2013, elite U.S. forces were deployed in 134 countries around the globe, according to Maj. Matthew Robert Bockholt of SOCOM Public Affairs.” This represented a “123 percent increase during the Obama years.” No one else is even remotely close. But it's been a long time coming.

Wikipedia's "Timeline of United States military operations," based on a 2004 Congressional Research Service report, does not include covert actions like those we wage so freely now. But it's a useful reference nonetheless, and conveniently divided into decades. The 1800s were the most peaceful, with just three conflicts, followed by the 1930s, with just four. Clearly, we have it in our power to be a much more peaceful, less bellicose nation, since we have been so for whole decades at a time.

In the 1810s, more than half of our 13 conflicts were in Spanish Florida, but by the 1830s we intervened everywhere from Sumatra (Indonesia) to Argentina and Peru, and this far-flung pattern has been the rule ever since. Initially, much of this was "protecting" U.S. business interests—at first primarily ships, but, over time, increasingly it was overseas investments. After World War II, we had the overlay of the Cold War, and now we have the "war on terror." But the fact that other countries fight much less often—as well as our own more peaceful decades—strongly suggests that there can be another way.

So, what exactly has the U.S. done to continue on, keeping and replenishing its list of enemies? Conserving them, as it were? In 2011, at the time we attacked Libya, Stephen Walt wrote a piece asking a similar question for Foreign Policy magazine, “Is America Addicted to War?” Looking at our history, the answer to that seemed clear, “since becoming a great power around 1900, it has fought nearly a dozen genuine wars and engaged in countless military interventions,” he wrote, “Yet Americans think of themselves as a peace-loving people, and we certainly don’t regard our country as a 'warrior nation' or 'garrison state.'”

And, indeed, we even elected Barack Obama to repudiate that direction, “Yet a mere two years later, we find ourselves back in the fray once again. Since taking office, Obama has escalated U.S. involvement in Afghanistan and launched a new war against Libya. As in Iraq, the real purpose of our intervention is regime change at the point of a gun,” he wrote. So, he asked, “Why does this keep happening? Why do such different presidents keep doing such similar things?”

Walt offered five answers. First, “Because We Can,” he noted: “when you’ve got hundreds of planes, smart bombs, and cruise missiles, the whole world looks like a target set.” Second, relatedly, “The U.S. Has No Serious Enemies.” Because we're so safe and secure (and protected by two oceans, to boot), “Americans have the luxury of going abroad 'in search of monsters to destroy,'” which we've been warned about, remember? Third, Walt pointed to “The All-Volunteer Force,” which removes a powerful potential source of accountability, as we saw with the Vietnam War.

Fourth, Walt said, “It’s the Establishment, Stupid.” While one party is more openly bellicose, the alternative is “'liberal interventionists' who are just as enthusiastic about using military power to solve problems, provided they can engineer some sort of multilateral cover for it.” A similar logic affects both sorts.

“In short, our foreign policy is shaped by a bipartisan class of foreign policy do-gooders who spend years out of power maneuvering to get in, and spend their time in office trying to advance whatever their own pet project(s) might be.... [W]hat’s the point of being a big shot in Washington if you can’t use all that power to try to mold the world to your liking?”

Finally, Walt noted, “Congress Has Checked Out,” despite the Constitution clearly giving the power to declare war.

It's a good set of explanations, but I think there's something more to be gained from a different point of view. Looking back at recent history, a potential turning point occurred from 1998 to 2001, when President Clinton created the Hart-Rudman Commission, the first comprehensive review of U.S. national security since the beginning of the Cold War. Unfortunately, the Bush Administration regarded it as yet another Clinton administration initiative to be tossed aside, even though it was deliberately bipartisan, and after 9/11 is was almost entirely forgotten. But it's worth reconsidering now, not because of the answers it contains, but because even it failed to raise the question of what worked and what didn't in the Cold War. If we ask the question that Hart-Rudman didn't, then the possibility of a very different future can start to appear.

First, we should start with what it did right. It was established by the Secretary of Defense in 1998 with a charter that explicitly called for it to:

1) conduct a comprehensive review of the early 21st Century global security environment, including likely trends and potential "wild cards"; 2) develop a national security strategy appropriate to that environment and the nation's character; and 3) recommend concomitant changes to the national security apparatus as necessary. This review should be advanced in the form of practical recommendations that the President of the United States, with the support of the Congress, could begin to implement in the Fiscal Year 2002 budget, if desired.

The commission issued three reports, one for each of its assigned tasks. The reports represented a bipartisan consensus of elite, insider experts. On the one hand, their "expert" side led to some illuminating critical perspectives, but on the other, their "insider" side limited their ability to think outside the box—which is really what needed to happen most. Still, it was deadly serious, and the chairmen really tried to get their message out, as the Guardian reported, less than a month after 9/11:

They and their staffs went to great lengths to acquaint the press in advance with the gravity of their findings. "Hell," says Rudman, "it was the first comprehensive rethinking of national security since Harry Truman in 1947."

The conclusions were startling. "States, terrorists and other disaffected groups will acquire weapons of mass destruction, and some will use them. Americans will likely die on American soil, possibly in large numbers."

Hart told me: "We got a terrific sense of the resentment building against the U.S. as a bully, which alarmed us." The report was a devastating indictment of the "fragmented and inadequate" structures and strategies to prevent and then respond to the attacks the commissioners predicted on U.S. cities. Hart specifically mentioned the lack of readiness to respond to "a weapon of mass destruction in a highrise building."

It's amazing how accurate it was proven, only to be totally ignored. Still, it failed to do one crucial thing: it didn't look back to assess past successes and failures, particularly the previous rethinking of national security under Truman, and the tragic failure of Vietnam, which came out of that framework, revealing something significant about its flaws.

Two contrasting understandings of the Cold War are laid out in a paper, "Kennan's Long Telegram and NSC-68: A Comparative Analysis," analyzing two key documents from the Cold War's formative period. Kennan's “Long Telegram” first formulated a comprehensive picture of the Soviet threat, and laid the foundations for the doctrine of containment, while NSC-68, the long-secret national security directive primarily authored by Paul Nitze, formed the blueprint for how the U.S. fought the Cold War throughout most of its duration.

Although they seemed like kindred documents to many people, the paper's author, Efstathios Fakiolas, argues that they employ two different models within the framework of foreign policy realism, which were only clearly articulated much later. Kennan relied on the "tectonic plates" model, in which there many other non-state actors, the world is not "zero-sum," and there is often opportunity for mutual cooperation. As a result, Kennan favored a strategy of containment that emphasized strengthening the West socially, economically and culturally, confident enough in its basic superiority to acknowledge and address any flaws the Soviets might expose.

Nitze, in contrast, relied on the billiard-ball model, which sees the international system as "composed solely of egoistic sovereign states interested in maximizing their relative power capabilities at the expense of others," and sees "world politics is a 'zero-sum' game in which national security conceived of in military and territorial terms is the one and only states' national objective." Hence, he ignored any concern about the West's internal flaws, and focused almost exclusively on military force to combat the Soviet Union.

It seems obvious to me that we fought Nitze's Cold War—even creating al Qaeda in the process—but we won Kennan's, through the appeal of our culture of openness and freedom, most vividly illustrated in the history of Eastern European resistance movements, especially in Czechoslovakia and Poland. If we had fought Kennan's Cold War, instead of Nitze's, we would never have created al Qaeda in the first place. And if Hart-Rudman had looked back critically at the mistakes made by shifting from Kennan's views to Nitze's, their reports could have warned us off the post-9/11 path that we pursued.

There was, after all, another way. 9/11 was not an act of war. It was a crime. And we could have treated it as such. Doing so would have meant strengthening and intensifying international law, as a means for putting all those responsible for 9/11 on trial. A trial in which the utter innocence of thousands of victims would have shamed and humiliated the perpetrators so thoroughly that no one would ever think to follow them again. The exact opposite of a war in which we created thousands of innocent victims of our own, completely destroying the moral foundations of superiority that Kennan's view rightly saw as fundamental.

This was the low-conflict path we turned our backs on. Rather than taking a path that has increasingly pitted security against individual rights and freedom, we could have taken that path, instead--a path that strengthened both. What we failed to do was to learn from our past mistakes—and that can only be done by those who are confident enough to admit to past mistakes, face up to them and make the necessary changes. We missed our chance to do this after 9/11, and the devastating attacks on Paris are just the most obvious bitter fruits of that missed chance. The 134 secret wars Turse wrote about are less obvious to us, perhaps, but no less bitter to those who die in them.

If we were really as good as we claim to be, wouldn't we be good enough to face up to our mistakes—and begin to act to change them? If we can answer that one question, face that one challenge, then all the rest of them—however difficult—will be easy in comparison. Because we will have reclaimed our moral center, finally, after all these years.