An open letter to Justice Scalia

You assert that we can't compete academically. As an artist and an educator of color, I feel compelled to respond 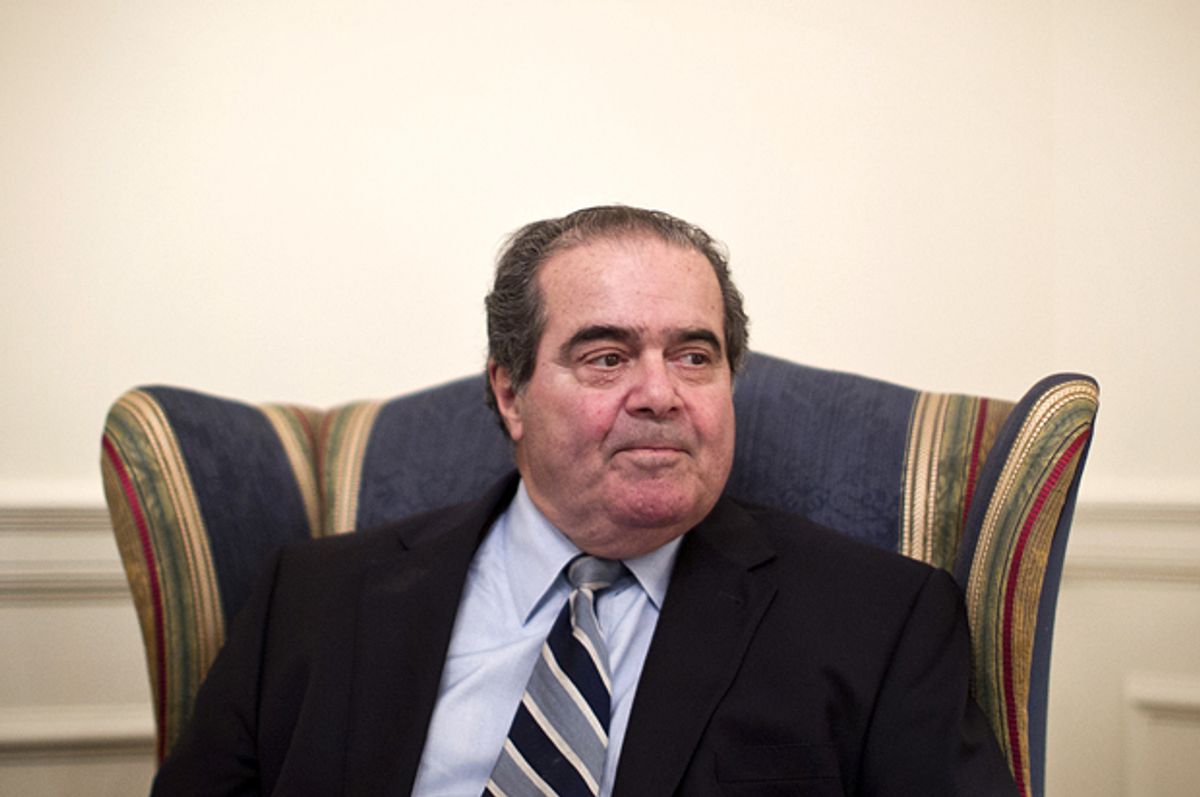 On Wednesday, as you heard arguments in the affirmative action case Fisher v. University of Texas, you suggested that black students should enroll at “slower-track school[s],” rather than study alongside white students at the university. “I don’t think it stands to reason that it’s a good thing for the University of Texas to admit as many blacks as possible,” you said. Your words reinforced a panoply of false stereotypes about the intellectual abilities of African Americans and underscored what many Americans fear: that our institutions of higher learning are somehow overrun with minorities who have “taken” white students’ rightful spots. You ignored the fact that the University of Texas’s holistic admissions program isn’t about “admit[ting] as many blacks as possible;” that it’s a tailored procedure designed to ensure diversity in each freshman class, and it follows guidelines endorsed by the Supreme Court in 2003. But your choice of wording telegraphs a message that many Americans are all too willing to believe: that black people can’t compete in academically rigorous environments. This is a message to which I, as an artist and educator of color, feel compelled to respond.

In 1994, I was a high school freshman when a book called The Bell Curve was published to extensive attention. The treatise, authored by Richard J. Herrnstein and Charles Murray, argued that human intelligence is heritable and that various ethnic groups have measurably different levels of intelligence. In a series of now-debunked statistical analyses, the Bell Curve authors suggested that African Americans have lower intelligence (as measured by IQ) than whites or Asians, a factor that supposedly predestines us for a host of social misfortunes, like poverty and teen pregnancy. The book’s conclusions weren’t closely examined prior to publication, but that didn’t stop The Bell Curve from selling 400,000 copies in hardcover or spending fifteen weeks on the New York Times best seller list. Thousands of people were willing to hand over good money to buy into this book’s awful premise.

As a result, I entered high school knowing precisely how low an opinion many Americans had of black students like me. I already knew I’d have to work hard to achieve success, but the praise for that book—author interviews, pundit commentary—made me see what I was up against. While I was lucky to find supportive teachers and friends throughout my education, my mixed-race heritage baffled many of the other adults around me. I recall family friends congratulating me on my academic successes by implying that I “must have gotten that from Dad,” while my singing talent was ascribed to my African American mother. I responded to most of these statements with a healthy eyeroll, but I understood that my achievements continually would be “surprising” to certain observers, and that I’d have to keep proving that I deserved to be exactly where I was. This never ends, by the way.

When I was accepted to the Iowa Writers' Workshop, a friend who’d applied to the same program asked, pointedly, whether the fellowship I’d won was “something for African Americans.” In the moment, I understood his anxiety; he was still waiting for an acceptance letter. But this friend had never talked to me that way before; we’d never drawn asterisks beside each other’s achievements. As it happened, my fellowship from Iowa was for underrepresented students, but of course, you had to meet the highly selective requirements of your program first, and show exceptional talent. No “slower-track” needed, thanks. Even now, as a teacher, my color confounds. A colleague at one of my first teaching jobs once looked me up and down, and asked, “which half of you is black?” as if my body were divided by a secret equator, or dipped in invisible ink. At another moment in my early teaching career, a student who was unhappy with her grade surreptitiously snapped a photo of me at my lectern and tweeted that my afro made it impossible to take me seriously as a professor.

Justice Scalia, I want to remind you that we share this country together. I’m descended from free and enslaved people. Some of them were black Virginians who worked hard to attain literacy and economic mobility in a nation that continually excluded them from the body politic. In fact, I hold a BA from the University of Virginia, where you spent four years as a Professor of Law, and an MA from the University of Chicago, another institution where you taught. And we share more than academics. My European ancestors arrived in America as Italian immigrants, just as yours did. You must know that the privileges of “whiteness” were not automatically bestowed on Italians. It wasn’t that long ago that Creuzé de Lesser wrote, “Europe ends at Naples, and ends badly. Calabria, Sicily, and all the rest belong to Africa.” At the height of the immigration wave, Italian Americans were subject to discrimination and violence, to negative stereotypes and offensive caricatures. In public schools, Italian children were discouraged from speaking their native language, even at home, while in the workplace, their parents often were barred from all but the lowest-paying manual labor jobs. The Johnson-Reed Act of 1924 was authorized, in large part, to curtail immigration from southern and eastern Europe. Today, we recognize how unfair all of this was, and we celebrate the contributions of Italian Americans in every sector of public life.

But as Republican presidential candidates call for sealing our borders to Muslim immigrants, and as increasing numbers of Americans react to world events with fearful xenophobia, your words feed into a stream of ugly “othering” that must end. I think you know that skin color is no predictor of intellectual acuity or future success in school. Students who are admitted to colleges and universities have the right to a rewarding education full of discoveries and challenges. This is the blessing of equal protection in public education. The Court must uphold it. Your comments this week show that you prefer to think of your fellow Americans, and especially African Americans, as points on a graph. But that approach reflects the exact type of one-size-fits-all thinking that you claim to oppose in affirmative action policy. Even worse, because you make no room in your comments for the health of the campus communities that admissions policies are designed to serve. Diversity benefits the whole campus. Every day, I’m thankful for the students I’m privileged to teach. They come from rural and urban areas, they practice Christian and non-Christian religions, they’re young parents and returning veterans and hopeful poets. We need them all.

Allow me to describe something for you: in the mountains of Fumin County, in the southern Chinese province of Yunnan, there’s a slender village road that twists through a landscape of clouds and red earth. At the center of town is a Christian church where young people, dressed in colorful robes, gather to sing the Hallelujah Chorus from Handel’s Messiah in crystalline harmony. They do this each evening, after completing their farm work. The choir is famous. The singers know hundreds of songs and can sing in multiple languages. If you go there, as I did several years ago, they will sing for you. Afterwards, they’ll invite you to ask as many questions as you wish about their culture (the Miao people) and it’s only polite to return their invitation. What would you like to know about my country? You’ll ask. But the singers of Xiaoshuijing will have just one question: Tell us about your choirs.

Justice Scalia, I wish to imagine America as a great chorus of unfolding voices, a massive instrument. When I think of the Xiaoshuijing singers, of the mystery that moved through their question so beautifully asked, I’m nearly undone. But I’m a professor of poetry; I live for beautiful questions. As a Supreme Court Justice, you move in the realm of answers, interpretations, solutions. Sometimes I wonder whose voice you hear. What’s it like to hear the law speaking with a singular voice, immutable from the moment of ratification? Over the years, you’ve sparred with Justice Breyer and others about how the 1954 Brown vs. Board of Education decision was reached. It seems that this vital ruling doesn’t square as neatly as you’d like with your originalist approach to constitutional interpretation. You’ve had to return to the issue in public comments, and you’ve consistently voted to weaken laws and policies, like affirmative action and the Voting Rights Act, designed to remedy the damage caused by our nation’s ongoing romance with structural racism.

Where should black students study? What schools are best for them? These questions already have been settled as a matter of constitutional law and they are not before you in the current case. The problem we must resolve as a society is not where to send students of color, but how to acknowledge the humanity of every American and how to ensure an educated populace for future generations. When I left my hometown for college, I was a black student. So? What else? I was a woman, an Italian American, a singer, a writer, an intellectual. I made good decisions to attend UVA, Chicago, and Iowa, and those institutions made good decisions by accepting me. Just like any other student, it was my responsibility to seek success for myself, to find mentors, to compete in the academic environments where I found myself, and to try to leave the place a little better than I found it. Who were you when you left for college, Your Honor? I’m sure the answer would not fit comfortably into a single sentence, a solitary line of prose. Remember there are 350 million Americans who are just as complex as you are. Imagine the sound we could make with all of our voices.

Kiki Petrosino is the author of two books of poetry: Hymn for the Black Terrific (2013) and Fort Red Border (2009), both from Sarabande Books. She holds graduate degrees from the University of Chicago and the University of Iowa Writer's Workshop. Her poems have appeared in Best American Poetry, The New York Times, FENCE, Gulf Coast, Jubilat, Tin House and elsewhere. She is founder and co-editor of Transom, an independent on-line poetry journal. She is an Associate Professor of English at the University of Louisville, where she directs the Creative Writing Program. Her website is http://wwww.kikipetrosino.com.