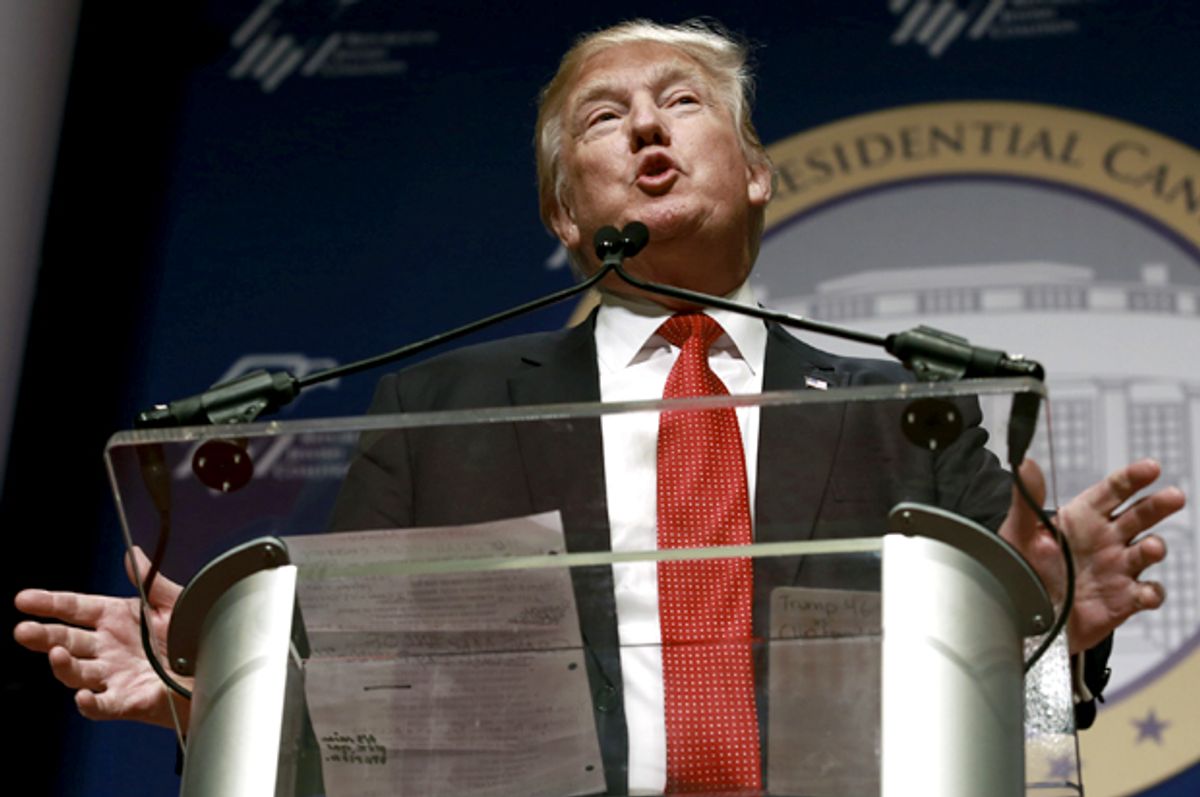 Donald Trump, who has spent much of his week defending his proposed ban of all Muslims immigrants to the U.S., has crossed the line from political punch line to frightening reminder of history.

The four weeks since the terrorist attacks in Paris, and increasingly since the massacre last week in San Bernardino, have seen Trump and other GOP candidates toy with a dangerous brand of xenophobia normally practiced by the villains in children's history books. Trump himself has suggested such action was justified by President Franklin Delano Roosevelt’s internment of Japanese-Americans during World War II.

Trump and his supporters gladly back such rhetoric as “telling it like it is,” a useless term of art generally deployed by people being outright offensive. His campaign has been a war on perceived censorship by nancy liberals of the real “truths” — that Muslims and Mexicans are dangerous and the nation needs a big, strong man to defend itself. But the war over political correctness was never an attempt to stifle debate —only a fence to keep out the kinds of discriminatory animism that has hoisted Trump to the front of our political atmosphere.

Trump has morphed such fear of a brown planet into a national movement separate from the Republican Party — a USA Today poll recently found 68 percent of Trump supporters would follow him to a third-party ticket. But its roots lie in the reinvigorated wars over political correctness led by conservatives. Before attacks in Paris and San Bernardino shifted our national focus to security and terrorism, protests from the University of Missouri and Yale against racist speech and symbols of racism had garnered a newfound wave of outrage from conservative critics.

For much of its history as a term, warnings of “political correctness” have come from conservative commentators warning of a supposed suppression of new ideas by liberal academics, best epitomized by Allan Bloom’s seminal 1987 book  "The Closing of the American Mind" (recently echoed by the Atlantic as “The Coddling of the American Mind”). George H.W. Bush declared in 1991 that although p.c. culture came from “the laudable desire to sweep away the debris of racism and sexism and hatred,” it also sought to declare “certain topics off-limits, certain expression off-limits, even certain gestures off-limits."

Political correctness has never been a goal of the left as much as decrying it has become a tool of the right, as if avoiding offensive speech just so happened to align with oppression of Republican ideals. Donald Trump has firsthand experience with this phenomenon. The list of people Trump has offended since he began his campaign is obscenely long — women, Mexicans, POWs, Muslims, Jews. Any protestation against his speech Trump and his supporters have gladly written off as the whining of easily offended liberals.

To much applause during the first GOP debate, Trump wrote off a laundry list of offensive comments he had made to and about women by saying, “I think the big problem this country has is being politically correct.” After NBC, NASCAR and other corporations ended business arrangements with Trump after he called Mexicans rapists and murderers, Trump decried those companies for taking the ”very sad position of being politically correct even though they are wrong in terms of what is good for our country.” In recent weeks, the GOP front-runner has used the phrase as a preamble to nearly every statement he has made about Muslims and Syrian refugees, and even went so far as to blame last week’s terrorist attack on political correctness.

Defending his right to be offensive, even dangerously so, is not a side effect of Trump’s campaign but the entire reason for its success. A Reuters poll found 77 percent of Trump supporters most loved him for his disregard for political correctness. Given the frequency and news coverage of Trump’s derogatory comments, one can safely assume this is not a group of people somewhat troubled by Trump’s xenophobia but, rather, believe it is the failure of the media and politicians to be so brazen as to practice racist nationalism.

Calling for sensitivity in political speech is not about protecting the fragile nature of those afraid of being offended, as Trump and his supporters would have you believe. It comes from the fear that such talk validates the very real and present threat of racist and ethnocentric ideologies shifting from the edges of political life and into the forefront.

While the Republican Party has been criticized for employing “dog whistle” politics since the days of Lee Atwater, Trump has thrown out the whistle and begun waving red meat to the dangerously ethnocentric hordes that lurk in the Republican base. Trump may think he’s ginning up his poll numbers by appealing to the most savage parts of American political life, but his speech is proving the inherent value of p.c. culture in preventing exactly the kinds of racism Donald Trump is living on.

Even if we disregard his anti-Muslim policies, Trump’s speech alone has spurned a new wave of Islamophobia that is presenting itself in the most vile ways. A Philadelphia mosque had a severed pig’s head thrown at its door. A Muslim architect’s plan for a new mosque in Fredericksburg, Virginia, was met with anger by locals who screamed at the engineer, “Every Muslim is a terrorist” and “Nobody wants your evil cult in this town.”

Such hatred is not specific to Trump, but he has forced such obscure and hateful ideology into the political mainstream and given new validity to the most fringe elements of our national discourse. Trump’s policies on both immigration and terrorism have received numerous endorsements from white nationalists--former KKK leader and former Louisiana gubernatorial candidate David Duke even rose from the political dead to hail Trump for defending “American values” and “the heritage of this country.”

Trump has proven speech can be dangerous, especially when it appeals to the kinds of historical forces that have too often led to real acts of oppression and violence. Alongside that, however, he has proven the necessity for societal borders between our national political discourse and bigoted ideologies. A failure to do so breeds not just people like Trump, but the massive crowds that have been waiting for someone like him to say what no one else would.