This is what the female gaze looks like: "Transparent" returns for a thrilling second season 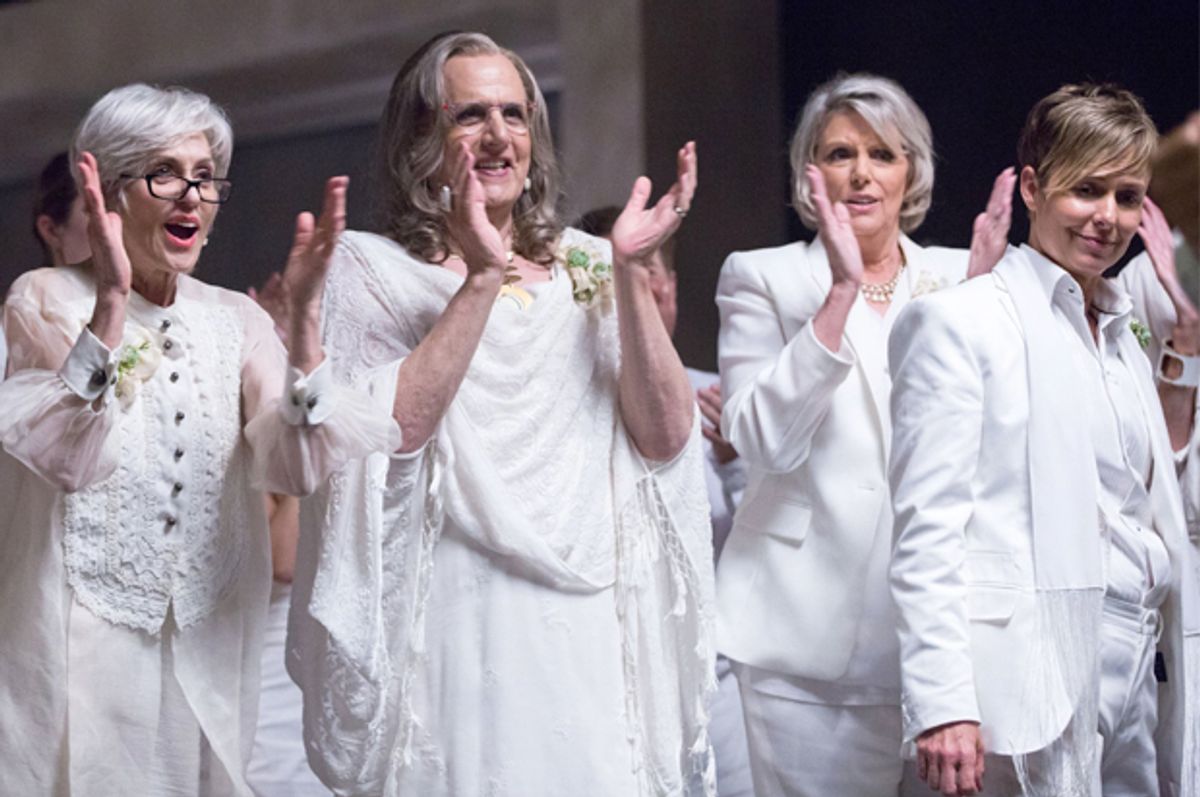 In 2014, Jill Soloway told Ms. Magazine that female showrunners like herself were “essentially inventing the female gaze right now.” This summer, while presenting a lineup of film shorts directed by women, she elaborated:

The male gaze is a privilege perpetuator. … a product of growing up other, of growing up as not the subject. You think there’s something wrong with your voice all the time. … Women are shamed for having desire for anything — for food, for sex, for anything. We’re asked to only be the object for other people’s desire. There’s nothing that directing is about more than desire. It’s like, “I want to see this. I want to see it with this person. I want to change it. I want to change it again.”

Soloway’s creation, the Golden Globe and Emmy-winning “Transparent,” is a gorgeous exploration of gender, family and sexuality, hinging around the story of the Pfefferman family, in Los Angeles. The second season of “Transparent,” which was released en masse at midnight Thursday night, is easily one of the best shows of the year. But more than that, it is also a five-hour experiment in the female gaze, that visionary perspective that barely exists at all. For all that the phrase is used as the theoretical opposite of the male gaze, it’s not clear what it would really look like. Melissa Silverstein (who quotes the same speech from Soloway that I just did) at Indiewire posits, “ I don't feel that the female gaze is simply the reverse of the male gaze,” adding, “The female gaze to me is not about pleasure or even power; it is about presence. The female gaze is about women storytellers planting their feet down and shouting with a camera: I AM HERE. I AM PRESENT. I MATTER.” There is furthermore a question of equality. Jenna Wortham, in the New York Times, finds artists who challenge the accepted “inoffensive” norms of platforms like Instagram, with either arty nude photo shoots or stains from menstrual blood. And as actress Kat Dennings memorably observed in W Magazine, the MPAA rates films as more “obscene” if they depict a woman orgasming.

What is particularly thrilling about “Transparent’s" second season is how it serves as a canvas for Soloway’s broadest imaginings on a feminist and/or progressive process of filmmaking—from casting to script, from breaking stories to cinematography—while also being incredibly, beautifully well done. Ideology and creative vision do not always create brilliant results, when mixed. In Soloway’s hands, the ideology and the vision inform and enhance each other. “Transparent” is not didactic, but it does not pander, either; relatedly, it is both about the most intimate dealings between humans and also the grand ideas that move them. “Transparent’s" second season is a technical tour de force, and one that begins to forge what a cinematic female gaze would look and feel like. The result is not quite as purely id as something like “Magic Mike XXL” (which in addition to being over-the-top is also heteronormative), and not quite as inaccessible as a Marina Abramović show (which are generally in just one art gallery at a time). It’s about more than just flipping the camera around, and about more than including female voices, stories and characters.

As Ariel Levy writes in the New Yorker, Soloway recruited writers from well outside the Hollywood industrial-complex for Season 2, and gave them a scriptwriting bootcamp to put them in shape. She called at least some of this mission “transfirmative action,” in an attempt to incorporate a “trans-feminine perspective.” It’s brought the show its first trans writer, Our Lady J, and another trans actor, Hari Nef. Only one writer has worked on a show before, besides Soloway herself, and that’s Bridget Bedard, previously of “Mad Men.” In the terrifically mechanized world of television writing, especially for comedy—especially for a network’s flagship show, as “Transparent” has become—this is unheard of; it’s even more out there than the auteur model adopted frequently by HBO, where one writer churns out every script, because at least that has a basis in film.

And Soloway’s process for working with her crew is similarly idiosyncratic. Levy writes:

“We’re taught that the camera is male,” she said, turning to walk uphill, backward, to tone a different part of her legs. “But I’m not forcing everybody to fulfill something in my head and ‘Get it right—now get it more right.’ ” Directing with “the female gaze,” she asserted, is about creating the conditions for inspiration to flourish, and then “discerning-receiving.”

Emmy winner Jeffrey Tambor affirmed this sentiment to Levy. “I have never experienced such freedom as an actor before in my life. Often, an actor will walk on a set and do the correct take, the expected take. Then sometimes the director will say, O.K., do one for yourself. That last take, that’s our starting point.”

Beyond process, “Transparent” also advances a type of storytelling that doesn’t quite follow narrative convention. The second season offers a circularity that confounds the basic narrative arc, that thing that generally tracks from problem to climax to resolution. Primarily, this is through the show’s sudden, brilliant, historical framing—a semi-real, semi-imagined layer of history that the main characters never quite see clearly, but one that sits on top of and at times even infiltrates the present day. “Kina Hora,” the premiere, and “Man on the Land,” episode 9, are both standout moments of the year in television for me, and it’s because the characters in this bubble of 1933 Berlin somehow leach into Ali Pfefferman (Gaby Hoffman)’s lived experience. Michaela Watkins, who plays the disapproving mother, shuffles past Ali and stares suspiciously after her; then Ali looks down and sees ugly shoes with bells on her own feet, shoes that she read might have been used by some societies to stigmatize and oppress Jewish women, in particular. It’s extraordinarily moving; Soloway uses the same music cue for the end of both episodes, suggesting a circularity of not just the time in the show but even the season we’re watching. In the finale, Maura visits her mother for the first time since her transition, and we are brought back to her painful birth, where her father was convinced they’d have a girl, and the doctors saw it differently. If you hadn’t put it together before, you will by the final scene—the innocent young girl in 1933, whose brother transitioned into a sister, becomes the silent, embittered woman in 2015, who can barely keep her attention on her surroundings. Things come full circle, but also, things are a circle. Soloway told the New Yorker that “the untrustworthy vagina” is “discerning-receiving”; in “Transparent,” time is, too.

This circularity comes to play with the arc of Season 2, as well, because nothing exactly happens. There are some shifts and resettlings, but as was the case in Season 1, much of the story of “Transparent” is of a family engaged in the slow process of becoming whatever they already were. It ends somewhat as it begins—a point in the middle of a process—and favors the excavation of moments to the mapping of arcs. Characters revisit old territory and break new ground, but ultimately exist in about the same plot of land—the Pfefferman homestead, as it were. And in that space, certain moments become indelible. Instead of leveraging the action forward, they weave into the fabric of the place—become bricks in the mythos of the Pfefferman family. In a sense, the experience envelops the family, and this enveloping is another distinctly feminine one. The thinker Douglas Rushkoff, just earlier this month, used language to describe the Internet that would work just as well for “Transparent”:

Indeed, the opposition between male narratives and female narratives are the subject of Camille Paglia’s “Sexual Personae,” including the much-mocked line: “Male urination really is a kind of accomplishment, an arc of transcendance. A woman merely waters the ground she stands on.” The Pfeffermans are mucking up their own ground again and again, but as is demonstrated, it’s not “merely” anything. Even the show’s interest in Judaism is caught up in a female perspective; Soloway cited Andrea Dworkin to Ms. Magazine, observing that “anti-Semitism is really just hatred of the feminine: They’re both rooted in a fear of questions. Womanhood and Jewishness are both experiences that are centered around questions, and we live in a world dominated by perspectives—in terms of both religion and gender—that are overwhelmingly answer-oriented.”

“Transparent” is almost intimidatingly well-versed in its feminist theory—but what I appreciate about this season is that it’s not beholden to it. Instead, through storytelling, it is embracing radical acts, and then presenting them—discerning-receiving—to the audience. It boils down to not just how beautifully filmed the season is (or isn’t), or how radically inclusive the cast is (or isn’t), but instead on what Soloway and her team has chosen to focus on. The female gaze of “Transparent” is obvious in what “Transparent” has chosen to be about, and how it has gone about doing those things. There is a welcome transparency here, to a wholly different experience of humanity that still regularly struggles for a place in the spotlight. It feels like the blinds have finally been rolled up, so we can see the world beyond the glass.