And then there were two: Trump and Cruz surge in latest Iowa poll, creating nightmare scenario for GOP

Trump and Cruz dominate in Iowa as concerns shift from the economy to terrorism, creating more panic in the GOP 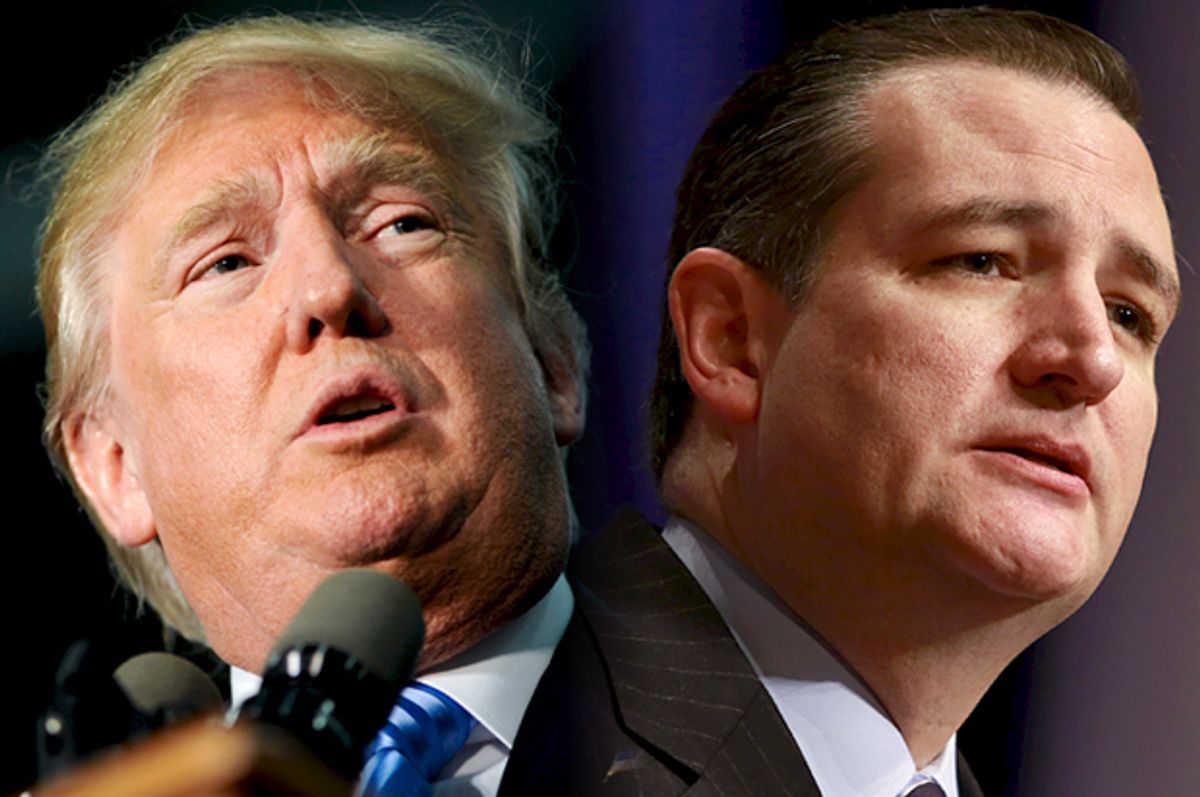 With the Iowa caucuses less than two months away, the Republican presidential race is as chaotic as ever. As yet there is no clear establishment candidate, someone who can unite every wing of the party without alienating independent voters in a general election campaign.

Jeb Bush was supposed to be that guy, but his campaign never got off the ground. He’s terrible on the stump, relentlessly dull in the debates, and ill-suited to the current political climate. Marco Rubio has emerged as the most likely establishment alternative to Bush, but he’s largely untested and, despite his potential, remains a comparatively weak general election candidate.

And then there’s Donald Trump.

Thanks to the credulity of the conservative base, this has been Trump’s race to lose for several months now. He’s impervious to the political laws of nature, and he surges in the polls at precisely the moment he shouldn’t. To his credit, though, Trump is attuned to the mood of the GOP right now, and he’s vacuous enough to say whatever it takes to appease the base.

Obviously, this is a disaster for the Republican Party. A Trump nomination would lead to a clean sweep up and down the ballot, virtually handing the presidency to Hillary Clinton or Bernie Sanders. Republican insiders are well aware of this, which is why they’re scrambling to deal with the Trump phenomenon. But so far they’ve failed to stop or even slow Trump’s momentum.

If things weren’t already bad enough for the GOP, the latest poll results show no relief in sight. With the exceptions of Trump and Carson, Ted Cruz would be the easiest candidate to defeat in a general election (Both Clinton and Sanders hold a significant lead in head-to-head surveys against Cruz).

To the disdain of Republican insiders everywhere, Cruz is now the most likely Republican nominee behind Donald Trump. The most recent Des Moines Register/Bloomberg Politics poll gives Cruz a ten-point lead over Donald Trump in Iowa, where the first Republican caucus is held on February 1, 2016. The Bloomberg poll was consistent with last week’s Monmouth University poll, which gave Cruz a five-point lead over Trump in Iowa.

The new Quinnipiac Poll released this morning isn’t quite as favorable for Cruz, but it’s encouraging nonetheless. Trump and Cruz are essentially tied, with Trump at 28 percent and Cruz at 27 percent. (Rubio is in third place with 14 percent, while Carson has dropped to fourth, with 10 percent.)

The recent terror attacks in Paris and San Bernardino have benefited Trump and Cruz enormously in Iowa. “The last time Quinnipiac University polled, the economy was the top issue. Now it is terrorism, a subject on which Donald Trump gets the highest of any of the candidates.” Cruz, for similarly perplexing reasons, leads the way on foreign policy, with 27 percent of Iowa Republicans saying he’s the most qualified on this front. To the extent that terrorism and foreign policy are the chief concerns of GOP primary voters, Trump and Cruz will continue to do well.

This sets up an intriguing dynamic between Trump and Cruz. Thus far Cruz has been careful not to challenge Trump directly. Tactically, this makes a lot of sense. Cruz sits comfortably in the “outsider” lane of the party, and therefore appeals to the same constituency as Trump. As Bloomberg’s Joshua Green observed, Cruz’s strategy has succeeded so far:

“In the new poll, respondents who say they support Trump have an extremely positive view of Cruz: 73 percent view him favorably, while 18 percent view him unfavorably. Asked to state their second-choice preference, these Trump supporters overwhelming pick Cruz (49 percent), with Rubio (16 percent) a distant second. If Trump falters or alienates his current supporters, they appear quite open to supporting Cruz.”

Cruz’s passive approach to Trump has likely run its course, however. Eventually, Cruz needs Trump to implode – otherwise he can’t absorb Trump’s support base. Despite his best efforts to delay a public dispute, Cruz’s recent comments at a private fundraiser may have upset the prevailing dynamic.

“After The New York Times last week quoted Cruz as having questioned Trump’s ‘judgment’ at a private fundraiser, the campaign went into overdrive to push back on the piece, sending out a news release that called it ‘misleading’ and decrying the story on Twitter. (The Times later posted audio confirming the quotes.) Following several tweets from Trump Friday morning, in which the real estate mogul indicated he relished the potential fight with Cruz, the Texas senator tried to defuse the situation, tweeting that ‘@realDonaldTrump is terrific.’”

This won’t work, though. Increasingly, this race is about Trump and Cruz, and Cruz can’t avoid a fight for much longer. Trump’s shtick compels him to attack, and if Cruz is his primary challenger, as he appears to be, then he’ll attack Cruz. It’s not clear whether this will help Trump or Cruz in the long run, but’s it’s a catastrophe for the GOP in any case.

Should the Republican race come down to Trump and Cruz, the party would be forced to choose between its two most unelectable candidates (outside of Carson, who no longer matters). This leaves Republican insiders in an impossible position: If they allow Trump or Cruz to get the nomination, they satisfy the base but sacrifice the party’s viability. If they intervene at the convention and force a more “moderate” candidate on the party, then the base will walk and the GOP has no chance in 2016.

Either way, the next few months will be interesting. The only clear winners at this point are Hillary Clinton and Bernie Sanders, both of whom would welcome a race against Trump or Cruz.