How obese is your state?: The country is in the grips of an obesity epidemic, but some states are worse than others 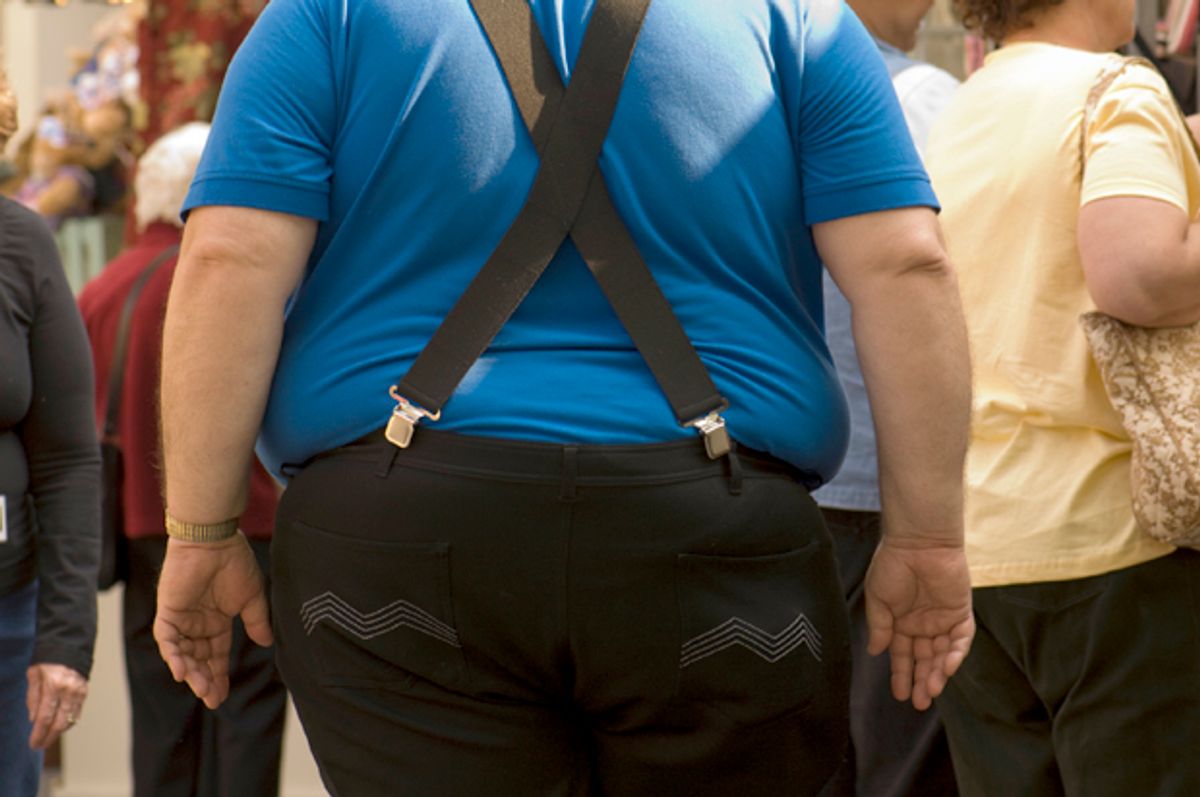 More than one-third of American adults are obese. That's more than 78 million people — more than the populations of Spain, Italy and the United Kingdom. Add the number of adult Americans who are overweight to that figure and the statistic is staggering: More than two-thirds of the population are not at a healthy weight.

The nation's future doesn't look much thinner: The American Heart Association says that about one in three American children and teens are overweight or obese, nearly three times the rate in 1963. And a recent report by the Centers for Disease Control and Prevention found that the U.S. obesity rate rose to 38 percent from 32 percent about a decade earlier.

It's a vicious and deadly cycle that often starts early. Parents who let their children overeat create a fait accompli, since being overweight in youth has been linked to higher and earlier death rates in adulthood.

There are two proximate causes: Poor diets marked by overeating and eating fatty and sugary foods and drinks, and a lack of physical activity. According to the Physical Activity Council, more than 82 million Americans aged six and up — around 28 percent of the population — were physically inactive in 2014.

The ultimate cause may be connected to Americans' addiction to fast food, which plays, literally, an outsized role. And this addiction — maintained and expanded by the industrial food industry — cuts sharply across race and economic lines. A CDC analysis of surveys conducted between 2006 and 2008 found that non-Hispanic blacks had the greatest prevalence of obesity (35.7%), followed by Hispanics (28.7%), and non-Hispanic whites (23.7%).

“Fast food restaurants cluster in poorer neighborhoods and obese adults eat more fast food than those who are normal weight,” according researchers of a study conducted in 2011 by UC San Francisco.

But while America's obesity epidemic isn't merely a problem of overeating and under-exercising, much of the conversation tends to overlook sociocultural factors that for many people come into play at a young age.

"This is what people don't understand: obesity is a symptom of poverty," said restaurateur and "Top Chef" judge Tom Colicchio, who testified before the House of Representatives in 2010, advocating for H.R.5504, the Improving Nutrition for America’s Children Act. "It's not a lifestyle choice where people are just eating and not exercising. It's because kids — and this is the problem with school lunch right now — are getting sugar, fat, empty calories. Lots of calories, but no nutrition."

When kids start becoming overweight, it's easy to slide into a cycle of dependence that is difficult to escape. “Once obese,” write the UCSF researchers, “many individuals meet criteria for psychological dependence. Stress and dieting may sensitize an individual to reward. Finally, fast food advertisements, restaurants and menus all provide environmental cues that may trigger addictive overeating.”

All of this eating and sitting around translates to a host of obesity-related health conditions, such as heart disease, stroke, type 2 diabetes and a range of cancer types, including breast, colon, uterine, kidney, esophageal, pancreatic and thyroid. Sadly, these are some of the leading causes of preventable death.

The cost of treating all these ailments is extraordinary: In 2008 (the last year for which figures are available), the estimated annual medical cost of obesity in the U.S. was $147 billion. On average, the annual medical costs for obese people were $1,429 higher than those of normal weight.

Though the nation as a whole is undergoing an obesity epidemic, the rates vary by state as well. To determine exactly where weight issues are most prevalent, analysts at WalletHub, a personal finance social network, compared the 50 states and the District of Columbia across 12 key metrics, including the percentage of adults and children who are overweight and obese to the sugary-beverage consumption among adolescents.

Some of their findings:

The states with the biggest weight problems are:

The states with the least weight problems are:

In the graphic below, a rank of No. 1 corresponds to the state with the biggest weight problems:

So just how fat is your state? Find out on WalletHub's obesity ranking.

It doesn't have to be this way. Pouran D. Faghri, a professor of health promotion sciences and director of the Center for Environmental Health and Health Promotion at the University of Connecticut, offers some advice for eating healthy without breaking the bank:

Eating healthy means more fruits and vegetables, and less fat and simple carbs, and that could be expensive. I usually recommend buying in-season fruits and vegetables and consider local farmers markets. Many vegetables can be frozen and still keep their nutritional values for a good amount of time in the freezer. Also canned fruits (not the ones in sugary syrup) and canned vegetables still have good nutritional values and may be bought in bulk. They also have a long shelf life and are cheaper than buying fresh.

In addition to eating healthy, it's important to get some exercise. Even walking every day helps. According to the Mayo Clinic, regular brisk walking can help you:

Have any tips about healthy eating or exercise to help keep the weight off? Share them in the comments.

Reynard Loki is AlterNet's environment and food editor. Follow him on Twitter @reynardloki. Email him at reynard@alternet.org.