Pizza Hut is the brand of 3 a.m. drunken pig-outs and Super Bowl parties—but you wouldn't know it by its Instagram 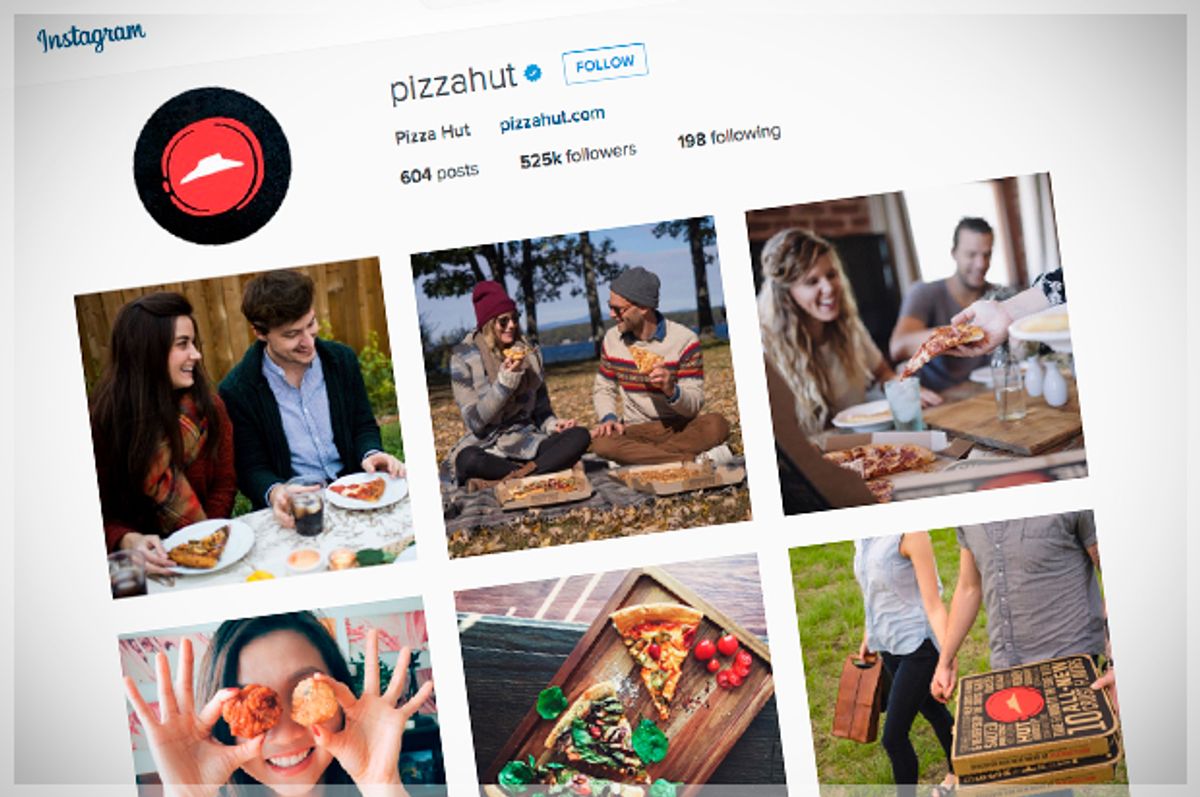 If they say that hell is other people’s Instagram photos, there’s no vision of eternal damnation more monstrous than whatever’s going on in Pizza Hut’s Valencia filters.

The ubiquitous restaurant chain’s Instagram account—which boasts 522,000 followers—appears to be brought to you by Sociality Barbie. Photos feature young, attractive American Apparel models, laughing at nothing while showing you how much they love this pizza they are definitely eating.

Here’s a young hipster couple eating it in the park!

No snow. No problem. 📷: @americayall

This woman is hiding behind a personal pizza like an adorably twee, plaid-wearing bunny!

These urban hikers people love Pizza Hut so much that they brought their own box to enjoy in the comfort of the great outdoors!

Pizza Hut really wants to pretend that it’s just your local pizza shop—owned by a group of scruffy Liberal Arts graduates who brew their own beer—but it clearly has no clue who their brand even appeals to. Founded in 1958 by the Carney Brothers, the popular franchise heralded the rise of convenience food on demand; whereas 1950s housewives had the TV dinner, Pizza Hut promised a ready-to-eat meal for the whole family delivered right to your door. People bought Pizza Hut because it required even less skill than operating an electronic box; in the age of mass consumption, it was food literally everyone could enjoy.

By 1971, Pizza Hut became the most popular pizza chain in the world—with 2,000 restaurants in over 100 countries. The chain’s image was as unpretentious and accessible as its products, which came to include the Personal Pan Pizza in the 1980s, a move that signaled the restaurant was moving toward targeting consumers as individuals. The company’s commercials featured celebrities like Ringo Starr and the Monkees or Donald Trump, who appeared in a 1994 ad to joke about his recent divorce to Ivana Trump. In the ad, he tells his ex-wife, who wants the last slice for herself, “Actually dear, you're only entitled to half.” Even Rush Limbaugh appeared in a Pizza Hut commercial in ‘95.

But the company began to rebrand its image in 2004, as the chain unveiled the “Pizza Hut Italian Bistro”—an upscale option for the more discerning customer. The announcement was widely derided at the time (it’s like Kmart announcing a Marc Jacobs line), but it prefaced a decade where fast food restaurants would attempt to hop on the bandwagon of burgeoning foodie culture. If the Nineties was the era of the Big Mac, the Aughts signaled the rise of the Whole Foods shopper—customers who were looking for the promise of organic, socially conscious food, if not necessarily the reality.

Facing flagging sales and diminishing returns, the fast food industry is clearly catering to that demographic to save them. The McDonald’s website looks a whole lot like Pizza Hut’s Instagram, with photos of an artist enjoying a hearty MacDo breakfast while he works and bearded campers shoving Premium McWraps in each other’s faces. If Pizza Hut believes that slapping an Instagram-ready swirl of BBQ sauce on a pizza qualifies as “thinking outside the box,” McDonald’s clearly has been taking notes. Check out the restaurant’s “Artisan Chicken Sandwich,” which looks identical to their old chicken sandwich.

If the New York Times declared the word “artisan” to be the most irritatingly overused word of 2013, we have chains like McDonald’s and Pizza Hut to thank for making the term utterly meaningless. As the Times’ Timothy Egan explains, artisan was once the “legitimate term for cheese makers with alternative grooming habits and creative body art,” but in 2015, it’s come to mean nothing at all. If the term suggests “made by a skilled worker,” there’s little that’s actually artisan about a pizza made by 15 minimum-wage employees using freeze-dried cheese and week-old pepperoni.

The word artisan is now used to describe everything from Burger King buns to Tostitos chips and sprinkles—but these brands have clearly misunderstood what customers actually want from them in the social media age. There’s a value in bringing the farmer’s market to the common man and democratizing organic food, but that’s not what these companies are doing: They’re attempting to sell a product to a demographic that isn’t going to be ordering the same greasy old pizzas Pizza Hut has sold for 60 years for their record listening parties and afternoon hikes. Pizza Hut is the brand of 3 a.m. drunken takeout calls and Super Bowl parties, not the cuisine of choice at your local gastropub.

As Radioshack’s failed rebrand discovered, slightly changing your name or your marketing strategy doesn’t change the fact that absolutely nothing has changed. Instead of filling their Instagrams and social media feeds with sepia selfies of pretty young white people shoving their faces with cheesy bread, the way to reach a new generation of eaters is to do something simpler: Make good food people actually want to eat. You can ‘gram your pizza all you want, but that doesn’t mean anyone will come.