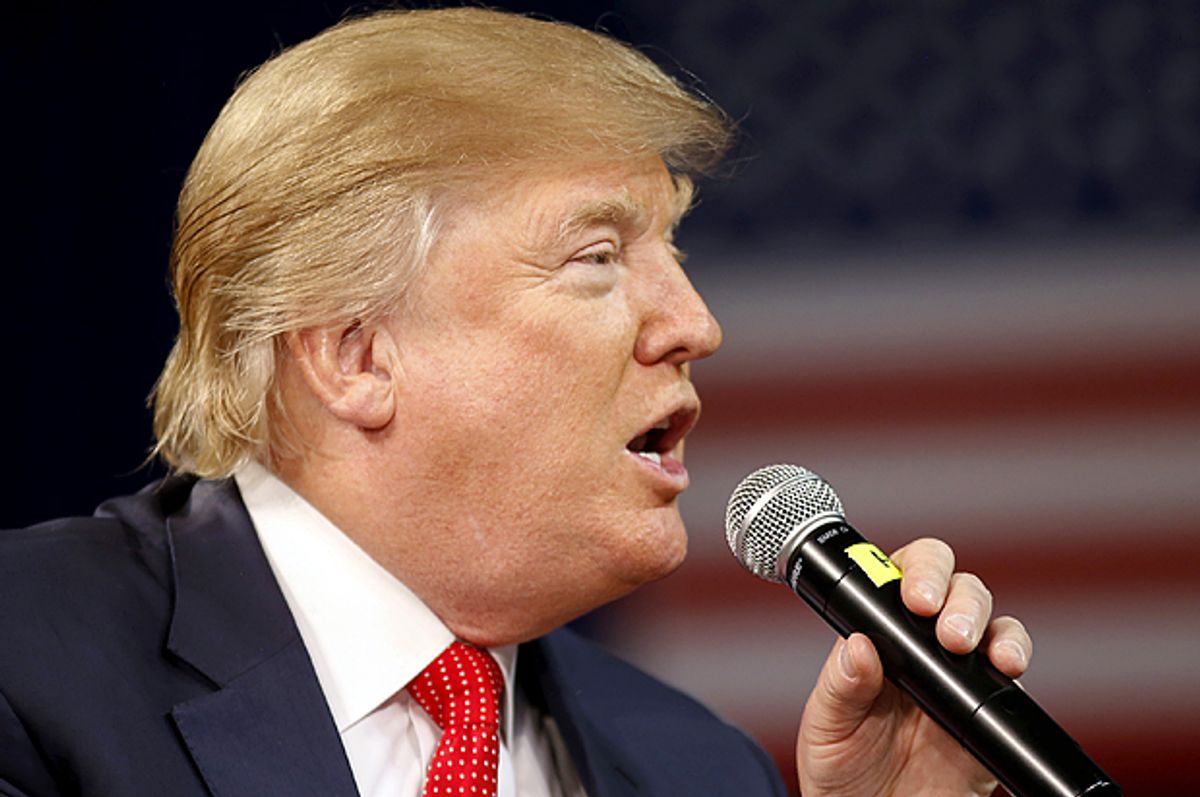 Donald Trump and his supporters are a mirror for the worst part of the right-wing political id.

Last night during a pre-debate rally in Las Vegas, Donald Trump supporters assailed Black Lives Matter protesters. While security forcibly removed the protesters from the event, Donald Trump’s supporters were reportedly heard shouting racial slurs. One of Trump’s most enthusiastic backers was even heard yelling that one of the protesters, an African-American man, should be burned alive:

Donald Trump held a rally Monday night in Las Vegas a day before the Republican presidential candidates are set to appear on stage for the final GOP debate of the year.

During the rally, multiple protesters attempting to interrupt the candidate’s speech were escorted out of the Westgate Las Vegas Resort. In a video captured by BuzzFeed News senior political writer McKay Coppins, a Trump supporter could be heard yelling r as security officers restrained a protester.

This is not the first time that either actual physical violence or violent rhetoric has been used at Donald Trump rallies. Several weeks ago, a black protester in Alabama was beaten on by Donald Trump supporters and reportedly called racial slurs. At other events, Donald Trump’s supporters have attacked protesters who were voicing their concerns about his anti-immigrant screeds towards Hispanics and Latinos. Trump supporters also attacked a homeless person because they thought he was an “illegal immigrant.”

Donald Trump describes his public as “passionate” and high energy. He urges on their violence with statements such as “maybe he should have been roughed up.”

Trump does not condemn the violence; the thuggery of his supporters is a type of barometer and life blood for his effectiveness as a proto-fascist demagogue. The right-wing media is largely mute on Trump’s antics. They have circulated and ginned up violence—be it domestic terrorism and/or thuggery by Trump supporters—for years. To forcibly and enthusiastically condemn it now would be a betrayal of how the Fox News media and its propagandists have weaponized their public and created the drumbeat for stochastic right-wing domestic terrorism.

When Donald Trump supporters, the overwhelming majority of whom are white (except for the black and brown human props that are trotted out to give cover for his racism), yell racial slurs at black American protesters, or in a spine chilling tone offer up a fantasy of “light the motherfucker on fire,” such moments are outside of the boundaries of normal political speech.

The United States has a deep, dark, and ugly history of burning black Americans alive. Those wicked acts are one of the few examples where America is truly exceptional—few if any other countries have a tradition of what historians and others have termed the “spectacular lynching.”

There have been other types of “lynchings” in recent years too. These include the dragging to death of James Byrd Jr., the extrajudicial killings of black people by white vigilantes such as George Zimmerman, and the shooting to death by cop committed by Darren Wilson in Ferguson and Jason Van Dyke in Chicago.

The victims of White America’s spectacular lynching culture have names.

They were Claude Neal, Samuel Hose, Elijah Strickland, and Emmett Till.

The names of many other black victims of white mob violence were lost to the historical record. But their pain and stories are remembered by the families, friends, community, and descendants they left behind.

For example, Samuel Hose (alias Samuel Holt), killed in a more brutal manner than ISIS terrorists do to their human prey, was tortured by white Christians in Georgia. Witnesses described his murder in the following way:

Sam Holt...was burned at the stake in a public road.... Before the torch was applied to the pyre, the Negro was deprived of his ears, fingers, and other portions of his body.... Before the body was cool, it was cut to pieces, the bones were crushed into small bits, and even the tree upon which the wretch met his fate were torn up and disposed of as souvenirs. The Negro's heart was cut in small pieces, as was also his liver. Those unable to obtain the ghastly relics directly paid more fortunate possessors extravagant sums for them. Small pieces of bone went for 25 cents and a bit of liver, crisply cooked, for 10 cents.

By the time Friday evening came around, a large crowd of several thousand people had gathered outside the Cannidy farm to observe and participate in the lynching. But the size of the mob began to make the men holding Neal nervous. So the "Lynch Committee of Six," as the group called itself, decided to take him to another location where they would have better control over how the lynching was carried out.

According to eyewitness accounts and newspaper reports, it was a drawn out and torturous process. Soon after arriving at the chosen spot, Neal was castrated. His torso was cut and stabbed with knives and sticks. His fingers and toes were cut off and the remainder of his body burned with hot irons. One newspaper account states there were 18 bullet holes in Neal's chest, head and abdomen.

Neal's body was then tied to the rear of an automobile and dragged to the Cannidy farm, where women and children participated in the final acts of mutilation. The body was then hung from an oak tree on the courthouse lawn. Photos were taken and later sold for 50 cents a piece. Neal's fingers and toes were reportedly exhibited as souvenirs.

The local sheriff cut the body down the following morning. A mob soon formed demanding that it be hung up again. The sheriff refused, the mob descended upon the courthouse. The mob then dispersed into the city streets and began attacking the remaining blacks in town.

It has been rumored that Claude Neal was even forced to eat his own penis by the white lynch mob.

When Trump’s supporters yell “light the motherfucker on fire”, hurl racial slurs, and beat up Black Lives Matter protesters they are invoking a wicked history of American white supremacy.

The 2016 Republican presidential primaries are one more reminder of how the GOP is the United States’ largest white identity organization. Donald Trump is not an outlier or a blip. His popularity is the predictable result of a political party and media that uses white racial resentment, overt anti-black and brown animus, nativism, sexism, xenophobia, and eliminationist rhetoric to mobilize its base.

Of course, Donald Trump, the right-wing media, and conservative opinion leaders will, for the most part, deny and excuse-make for the racism and increasing violence from his followers. The paranoid style will assert itself: the black and brown protesters attacked by Trump supporters are “agent provocateurs” designed to “undermine” and make “conservatives” look “racist”. This is priceless irony. American conservatives demand “personal responsibility” and group accountability for every other group of people but themselves. In their deflections they prove, again, how contemporary conservatism is a movement typified by white victimology.

As such, every Muslim must apologize for ISIS and Al Qaeda. All black Americans must be held responsible for “black crime” and “the broken black family.” Yet, (white) conservatives can hide behind the shield of “individualism”. White privilege is many things. But, first and foremost, it is the freedom to never be held accountable for the actions of other white people.

In the weeks and months leading to the presidential election, Donald Trump’s supporters will continue to escalate their rhetoric and violence. Donald Trump will smile. Republican elites will continue to act as though they are aghast and shocked at what is happening with their party and public. The Republican Party and the Fox News echo chamber made Donald Trump possible. They encouraged his supporters. They nurtured his lies. They fed the rage machine and conspiranoid fantasies of movement conservatives. Now they are reaping what they sowed. This chaos would be justice and righteous comeuppance…if the rest of the American people did not have to risk being collateral damage from the mess caused by the Republican Party’s monsters.