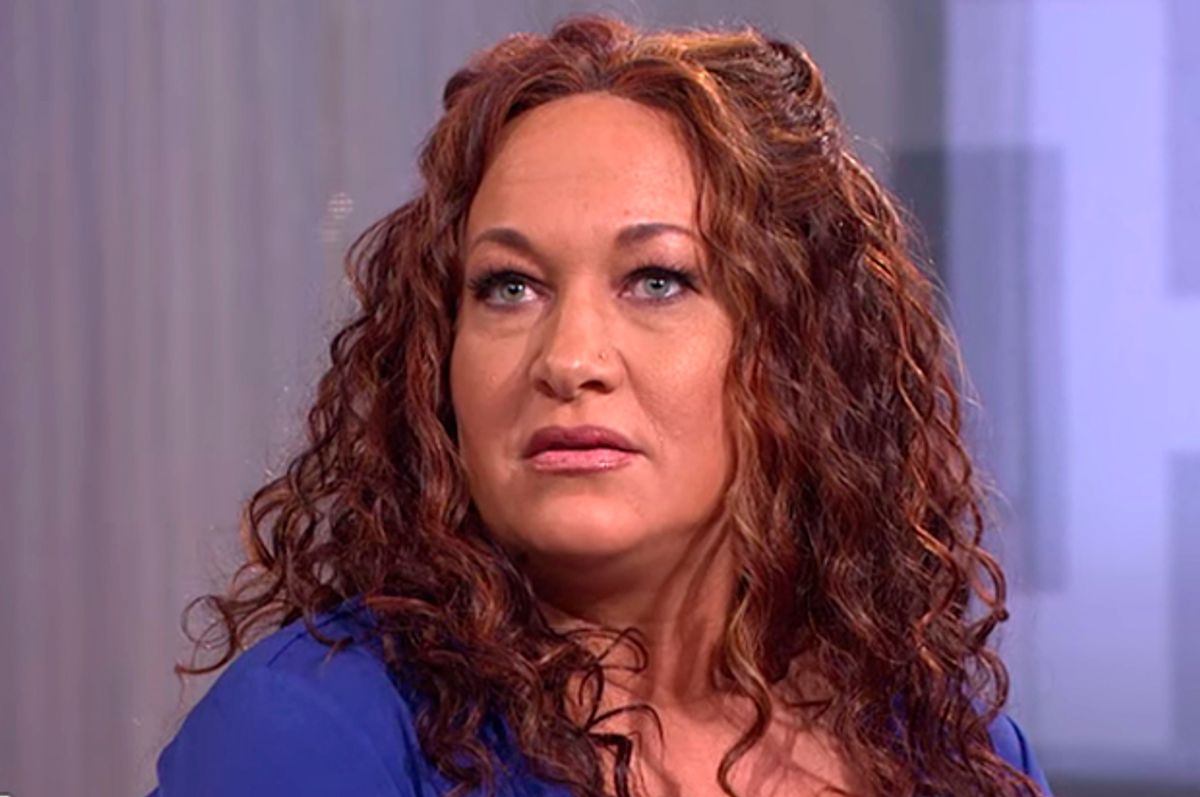 A few months back, Black Twitter created what may go down in history as the single greatest Twitter conversation of the year, with the #AskRachel movement. #ThanksgivingWithBlackFamilies runs a close second (and #StayMadAbby was just as brilliant), but #AskRachel took a bizarre story and brought out its inherent humor. One of the best parts about the social media conversation was watching many black people admit that they couldn't answer some of the #AskRachel questions. We didn't all grow up listening to Mike Jones, the rapper whose telephone number we learned in his lyrics, and we don't all know the cultural significance of "dancery." But we all laughed, because, we understood that the Rachel Dolezal story was never about black identity and how it is defined (and how it also, always, resists certain definitions). Dolezal was one more hilarious break from certain other realities (her story hit right around the time the McKinley story was making some headlines), and it was a welcome distraction. It deserved all of the attention it got, in that moment—every meme, tweet and also the angry reactions to the made-up idea of “transracialism” as a phenomenon akin to being transgender. What the story does not deserve is the serious journalistic treatment it's being given, all these months later, by publications like The Guardian and Vice’s Broadly.

Of course, people will use this opportunity to argue that the definition of "journalism" has long since changed. Indeed it has, but Rachel Dolezal is no longer being treated to mere blog posts or collections of tweets and gifs. These two stories are lengthy, well-written, thoughtful and nuanced in their treatment of this shared subject. And of all the subjects they might have chosen, if they wanted to publish a story about race and identity in America, both publications chose Rachel Dolezal. It's akin to writing about higher educational disparities, or institutionalized racism, and choosing Abigail Fisher for the subject. The choice implies that Dolezal's story deserves time and thoughtful storytelling above so many others that might have been told from the perspective of actual black women who feel that they are not free to be themselves, or, were this a piece about Fisher, stories about actual students who cannot go to the college of their choice because of a real—and not perceived—racism.

The Broadly piece, titled "In Rachel Dolezal's Skin" is especially troubling, as it feeds into this notion that certain basic signifiers determine blackness in America. In the opening paragraph describing the setting of Dolezal’s baby shower, we are presented with these signifiers, as if writer (and managing editor) Mitchell Sunderland hopes to convince us that Rachel Dolezal is black:

“Hip-hop and jazz play on a flat-screen TV, and paper yellow duckies hang on the silver walls. While Rachel's 21-year-old adopted son Izaiah pops a bottle of champagne, Rachel's friends—her ex-boyfriend Charles Miller and several women—eat croissant sandwiches on disposable plastic plates. The women vary in age and race (there's nearly an equal number of black and white guests), but when I ask them how they know Rachel, most give the same answer: ‘She does my hair.’”

Similar themes run throughout the piece—these eloquently placed droppings of evidence that Dolezal's home and current family life "look" like what is assumed to be blackness. Dolezal likes hip-hop and jazz. Her son's name is Izaiah. She has black and white friends, equal in number (at least at this baby shower). And then the gauntlet is thrown down: she does black women's hair. Now do you believe she's black?

Much has already been written about the false correlation between the word "transracial" and "transgender" (by the likes of Kovie Bakolo and Zeba Blay) and what violence such a correlation does to conversations about race and transgender issues. And if you still believe that "transracial" is a thing, it's probably not your fault. Articles like Broadly's and The Guardian’s—even during those moments where the authors are clearly challenging Dolezal—validate such beliefs. The suggestion in these two pieces is that we need to at least hear her out, that we need to understand the world she comes from (and it is a fascinating, troubling world) and how much she struggled as a woman who felt she was born in the wrong skin.

In the Guardian, Chris McGreal (an award-winning journalist who covered Africa for the Guardian for 13 years), like Sunderland, points repeatedly to the effects of the backlash on Dolezal—how it’s left her emotionally distraught and jobless. She went from being president of the NAACP in Spokane and an adjunct professor of African studies to being jobless and “reduced to raising her teenage son on food stamps with a bit of hairdressing on the side.” McGreal goes on to stress that Dolezal did not deserve such an ousting and such torment. She didn’t, apparently, deserve #AskRachel tweets or the laughter that came with them.

“For all the sense that Dolezal is unable to face up to her own part in creating the situation, it’s also difficult to believe she deserved what followed. She worked hard within the community she identified with, giving of herself and her time for others.

As she wipes away the tears, it’s hard not to think that she deserved a little of the humanity she has shown to others. Yet behind the pain is a determination not to be forced from the identity she has embraced.”

McGreal finds it admirable that Dolezal isn’t letting the rest of us stop her from believing she’s black, that blackness is a choice. And in his piece, he asks that we admire her too, or at least acknowledge the humanity in such stark determination.

This plea to the public to understand Rachel Dolezal is something we should all be accustomed to by now. We see it every day, and we call it journalism when we should be calling it something else. It may not represent all of the other work from these writers or these publications, but it’s there all the same. And it may seem dramatic and unnecessarily harsh to link Rachel Dolezal to the white terrorists plaguing this country, but the link lies in their treatment and their reception by a media that bends over backwards to provide nuance to white people, at all times, no matter the cost. Planned Parenthood shooter Robert Dear, and those who came before him—and those who are surely coming after him—will be recipients of the "lone wolf" narrative. They are "gentle" men with a history of violence. Or, they are men for whom mental illness is the issue, and their killings represent a grand opportunity to finally talk about mental health in this country, just as Dolezal's story—though it may be troubling—represents the chance to talk about identity in America. It's the same nuance that was granted to Josh Duggar and the family, church and officers of the law who stood behind him—the stories are only perceived as complex and the perpetrators as inherently human because they are presented as such.

Such a presentation wouldn't be problematic at all if black men, women and children received such treatment. Instead, black victims of violent crimes are not even granted such nuance, as we saw most recently with CNN’s treatment of Freddie Gray. The Guardian’s McGreal is aware of this, and it must be said that a story like this piece on Mike Brown proves as much. Why, then—when it’s so clear that there are so many black Americans in need of equal representation in the media—interview Dolezal?

Perhaps the best thing that comes out of both the Broadly and Guardian articles is that we now know for sure, beyond a shadow of a doubt, that Rachel Dolezal is white. Reporters are digging deep to present what was a strange figure in as humane a way as possible. They’re asking about her difficult childhood, and demanding that we do the same. They’re interviewing family, friends, co-workers and children to present a full picture of a woman they believe has been misrepresented. Would that they’d been asked to do such digging to produce a lengthy story on Sandra Bland, complete with artwork from her youth and images of her home. Would that they’d done been told to do such hefty work for a compelling and nuanced tale about one (or all) of the 13 women sexually assaulted by Daniel Holtzclaw. Where are the moving narratives of so many black women, who did not pretend to be black, but are still “reduced” to raising their children on food stamps Why aren’t we treated to stories about their baby showers and their home towns?

It’s the fact that we are not (and probably never will be)—it’s that very specific marginalization that unfortunately, unites so many American blacks. Not hip hop or jazz playing at a party, not throwback Mike Jones lyrics, and not even skin color (there are, really, too many variations to count)—but a marginalization that we did not choose, any more than Rachel Dolezal chose the white parents to whom she was born. Others have called it, simply The Struggle, and it cannot be chosen, learned or adopted. You cannot transition into it, hard as you may try, because it appeals to some deep longing within you.

So, although Black Twitter attempted some lighthearted laughs at this story a few months back, it’s no small thing, that a white woman—even one who believes she is black—is still considered to be a worthy subject of a journalistic story, more so than any other black woman, doing anything notable. And it’s not unrelated to the fact that, in 2015, a white man who commits mass murder can receive more empathetically composed news headlines than a murdered black child. Black lives, minds and stories still do not matter as much as white’s and these recent articles (from publications that could surely stand for more articles about identity as experienced by actual black women) are more proof of that.

Ta-Nehisi Coates has noted that “there are no racists in America,” at leasts, not according to those who believe themselves to be white Americans. Those same whites would find it difficult to believe that two stories written with lovely prose and accompanying images—stories that capture the fascinating life of a woman on the long road to both motherhood and perhaps certain self-realization—could be racist, or at least reflections of such. But what else can you call these pleas to explore more white privilege (including the privilege to, apparently, choose your race)? What else do you call this drive to simultaneously uplift a white woman who is either a lifelong liar, or a troubled product of fanatics (who, perhaps, went on to become fanatical in her own way), while denouncing the many black men and women who spoke out against her? Is it still journalism? Or is all this nuance for Rachel Dolezal merely white privilege and more racist storytelling pretending to be something else, and asking that we respect it because of supposed good intentions? Perhaps, like Dolezal, these publications and their writers mean well, but that doesn’t make them less deserving of our criticism.