The House GOP's under-the-radar oil coup: The dangerous domestic bailout that they're almost certain to win

Immediately on the heels of an historic climate deal, Congress is poised to render that progress moot 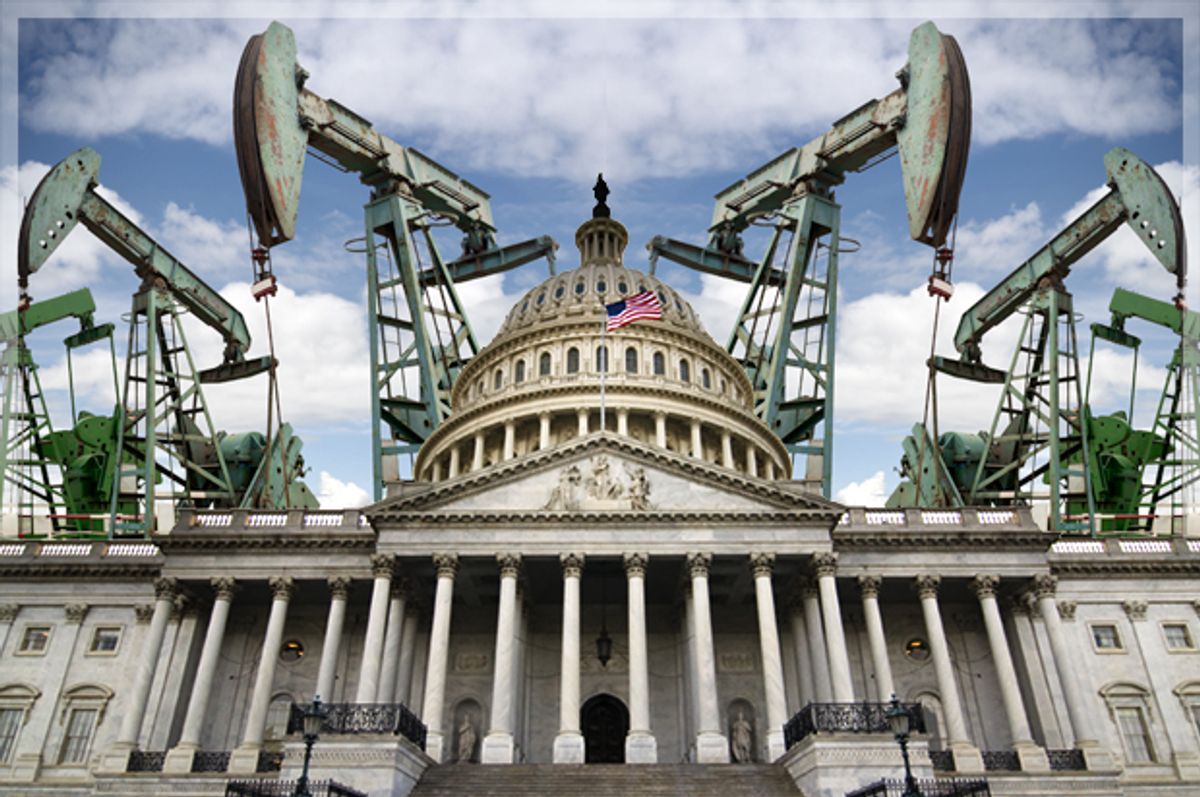 Here are some questions for you to ponder today: What if the first major piece of legislation after the historic international climate agreement in Paris gives domestic oil companies lucrative financial incentives to spew more carbon into the atmosphere? What if the first item the President signs into law after the climate accords assures the very spike in drilling that scientists believe we cannot afford within our carbon budget?

That appears to be the likely result of an end-of-the-year deal in Congress. Republican insistence and Democratic acquiescence has paved the way for Washington to lift a 40 year-old ban on oil exports, which will not only aid a hurting domestic oil industry, but which would increase carbon pollution in the United States, and probably around the world.

Lifting the oil export ban, put in place after the 1973 OPEC embargo to conserve supplies at home, has become among the most high-profile riders to the omnibus spending package, and the culmination of a massive lobbying campaign. It’s the usual story: Lawmakers besotted with campaign cash leading the charge; strategically placed op-eds by trade group chieftains in Capitol Hill journals; official-seeming “independent” research studies promoting the idea; think tanks like the Brookings Institution taking over $1 million dollars a year from the oil industry and suddenly endorsing their top priority (one of nine think tanks on board with lifting the ban); TV ads and bus signs popping up all over D.C.; in summary, a blitz, with industry and the recipients of its largesse alike endorsing repeal of the ban as a job-creating, investment-boosting, economy-saving miracle.

In reality this is a bailout, no different than the one for banks in 2008. Oil prices are hovering around $35 a barrel, the lowest in seven years, amid a global over-supply. Producers who borrowed large sums of money to buy drilling equipment and hire personnel in boom areas like the North Dakota Bakken shale, under expectations of $100 a barrel oil, are finding that their yield isn’t bringing back as much money as they thought. That is leading to a wave of defaults and bankruptcies, which are expected to increase. You’re seeing this play out in a crash in high-yield junk bonds, many of which are filled with energy-related debt.

Lifting the export ban would reverse this precipitous drop. The Energy Information Association estimates that domestic oil producers would gain at least $25 billion in additional annual sales by 2025 if the ban were lifted. Meanwhile, industry claims that hundreds of thousands of jobs will be created if we repeal the ban don’t have many facts backing them up. Energy companies are producing far more drilling with less workers; it’s not certain they would hire anyone back if they drilled more to chase global profits.

But everyone agrees that lifting the ban will incentivize more drilling, given the additional markets and profits available for the finished product. That’s precisely what leaders around the world went to Paris to prevent: a rise in greenhouse gas emissions. In addition, the increased energy use to ship U.S. oil around the world, rather than keeping it at home, would emit more carbon as well. The extra carbon use, the Center for American Progress theorized earlier this year, would equal 135 coal-fired power plants.

For two years, industry lobbyists and their friends in Congress have pushed for repealing the export ban. The omnibus offered an opportunity. It became one of many riders, unrelated policy changes stuffed into the budget bill in the hopes that it could be carried along into law like a stowaway on a ship.

Democrats have tried to bargain, using an export ban repeal coveted by Republicans to mitigate the damage from the rest of the riders. In exchange for repeal, they want a permanent renewal of production tax credits for wind and solar energy, for starters. They have asked for a renewal of the Land Water Conservation Fund, which helps pay for protected areas like national parks. They want compensation for domestic oil refiners, who would lose a lot of business if oil producers can export. And other environmental riders, like rollbacks of regulations on power plant emissions and clean water, would have to get cut out of the final deal.

But that leaves the carbon-intensifying oil export ban repeal itself. And most Democrats have accepted that as the price to pay for keeping all that other stuff out of a year-end deal, which includes the omnibus and a series of tax breaks. House Democratic leader Nancy Pelosi said last week she could envision a final package with the lifting of the export ban. And though they’re formally opposed to repeal, White House press secretary Josh Earnest wouldn’t threaten a veto over the provision.

Indeed, over the past year, the White House has quietly allowed limited crude exports to Mexico, suggesting their opposition isn’t all that strong. Several former Administration officials are also promoting lifting the export ban.

Most environmental groups don’t think that bailing out domestic oil companies and pushing them to drill more is worth any trade. “Continued investment in renewable electricity must not come at the cost of the very climate gains we hope to achieve from their expansion,” eighteen groups wrote earlier this month. “We need to reduce all fossil fuel use, not expand oil production and consumption.”

Michael Brune of the Sierra Club, one of the few remaining groups not bought off in this debate, highlighted the extreme irony of a celebratory climate deal happening precisely while Congress negotiates to expand carbon pollution. “Democratic Senators should know that if they vote with Exxon on this measure, the rest of us won’t forget,” Brune wrote.

As of Monday afternoon, we don’t yet know the full details of the year-end spending and tax deal. But if it includes lifting the oil export ban, Congress will have responded to a global movement to save the planet by putting it in more peril. Preventing climate disaster always seems to have this “two steps forward, two steps backward” quality to it. But it’s rapidly becoming too late to lose ground, whether Congress understands that or not.