This is the horrific and violent gay slur a star player aimed at a ref: Rajon Rondo's virulent tirade

An all-star attacks a ref with the nastiest words he can think of. He responds with bravery -- by coming out 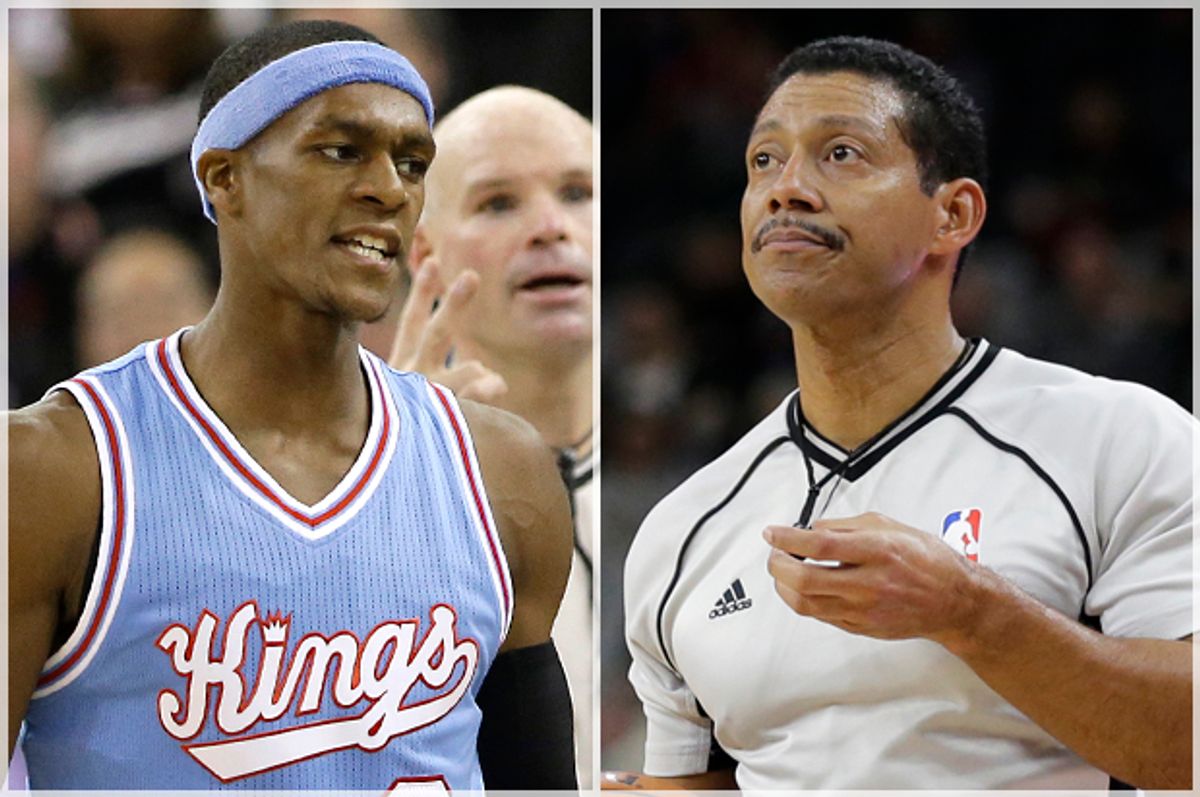 Two weeks ago in Mexico City, Sacramento Kings guard Rajon Rondo was ejected from a game against the Boston Celtics for haranguing referee Bill Kennedy. Rondo, a former All-Star who has returned to form this season, is one of the sport’s most inscrutable figures, exactly the kind of moody, unpredictable player who would confront an official and get assessed two quick techs. His confrontation with Kennedy, while heated, was nothing beyond the pale.

Then on Friday, the league announced that Rondo was being suspended for one game for “directing a derogatory and offensive term towards a game official and not leaving the court in a timely manner.” What exactly was said remained obscure, which seemed about right for Rondo. I joked on Twitter that it reminded me of the final scene of "Lost in Translation."

Yesterday, though, we got our answer and it was ugly. The league leader in assists hadn’t simply gone off on Kennedy. He’d launched into a virulent anti-gay tirade against Kennedy, who shortly after the details of the incident became public, issued a public statement proudly declaring his sexual orientation. Rondo, who will miss tonight’s game against the Rockets, declined to speak to reporters. Either he’s carefully weighing his next move or simply has nothing to say about the incident. Neither would come as a surprise.

The NBA has disciplined players before for using anti-gay slurs. In 2011, both Kobe Bryant and Bulls center Joakim Noah were fined for using the word “faggot” in game situations (in Bryant’s case, it was directed at another referee; Noah was shouting down an anonymous heckler). Bryant and Noah are both smart enough and worldly enough to know better and yet neither seemed to have given their use of the word much thought. It was a teachable moment for the NBA, as Bryant, Noah, and others around the league were forced to reflect on just how loaded this language—thrown around so casually in the world of sports—really is.

Rajon Rondo knew exactly what he was saying and why he was saying it. He wasn’t looking to hurl all-purpose invective at Kennedy. Rondo shouted “you’re a motherfucking faggot, Bill!” in the most derisive way possible, a derogatory statement that could never be mistaken for (or written off as) anything other than an act of aggression. Suspensions are almost always reserved for acts of physical violence. In this case, the league made a determination that Rondo’s actions amounted to a verbal assault. When Rondo flipped out on Bill Kennedy and decided to go for the jugular, he went right at Kennedy’s sexuality. And he made sure that Kennedy knew exactly what he thought of it.

There is, as they say in sports, an upside to the situation. If Rondo knew about Bill Kennedy’s sexuality, it was likely an open secret around the league. There’s no way of knowing whether he had plans to come out before this. But his decision was colored by his confrontation with Rondo; it was an act of bravery, if not defiance, an announcement that he refused to be intimidated or marginalized. It felt like a direct response, even a challenge, to Rondo and other players with similar attitudes—or those wrestling with the notion of gays in the NBA.

This certainly wasn’t the first time that someone has been verbally gay-bashed in an NBA contest but never before has it been identified—and dealt with—as exactly that. Jason Collins, the journeyman big man who was the first openly gay athlete in a major American sport, may never have played another game but at least the league is making it clear that it won’t tolerate outright homophobia. Sports remain a hotbed of horrible, unspeakable things but this is at least a little bit of progress.

Rajon Rondo will probably resume his career renaissance without a hitch. Rondo is by nature an outsider but he’s still a part of the basketball community and that’s not about to change because of his actions or the league’s stance on them. He has no real endorsements to lose at this point and he’s just been too good for the Kings to have an opinion on the matter. The only real might be “Rondology” and the entire cult of personality that had sprung up about Rajon Rondo over the years—something I’ve been a part of and, through writings too numerous to link to, helped contribute to.

I’ve never expected Rondo to offer up moral guidance. If anything, his impishness is a large part of his appeal. I also probably shouldn’t be shocked that a professional athlete who hails from the Deep South harbors these attitudes. I wouldn’t be in a position of feeling like I had to renounce or disown him if I were capable of that perfectly sensible division between athletic performance and actual personhood. But when it comes to Rajon Rondo, I’ve never had any interest in separating the two. Rondo was an unorthodox human being and it showed in the way he approached the game. Conversely, some of the choices he made on the court could only be accounted for by koan-like riddles about his mental state.

Trying to fathom Rondo as a person was a large part of having him as one of your favorite players. For years, that activity paid unmistakable strange dividends. Even when Rondo was an asshole, he trafficked in mystique. This week, though, we all found out about a part of Rondo that’s not only deeply alienating—it’s completely prosaic. No matter what else he is, Rajon Rondo is a garden variety homophobe. And for those of us who always viewed him as special or endlessly fascinating, that might be the most disappointing part of all.