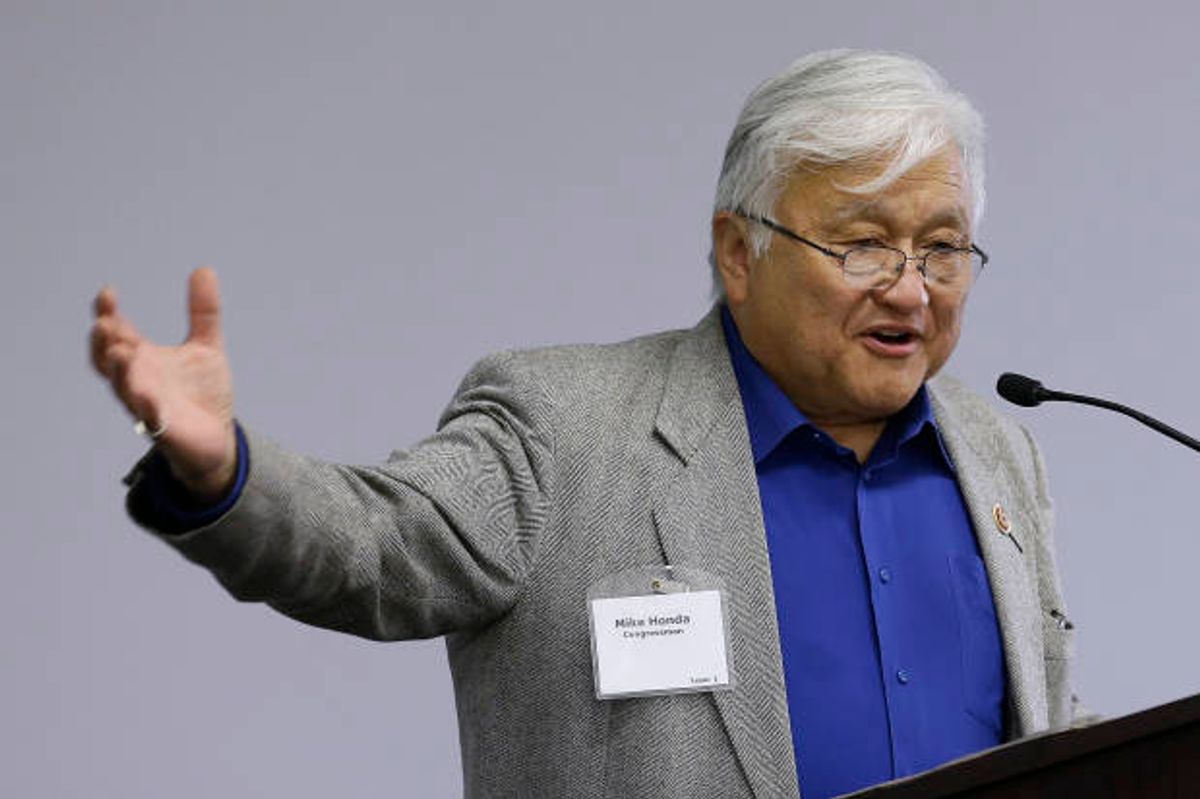 FILE- In this May 2, 2013 file photo, U.S. Rep. Mike Honda speaks during the City of Fremont Legislative Brunch at Tesla motors in Fremont, Calif. Honda and Tom McClintock have never apologized for their strong partisan leanings and are not about to start now. Honda, one of Congress' most liberal lawmakers, and McClintock, one of its most conservative, face challengers from within their own party in next Tuesday's midterm elections. (AP Photo/Jeff Chiu, file) (AP)
--

California Democratic Congressman and Japanese-American survivor of WWII internment camps Mike Honda penned a moving op-ed for TIME to remind Americans of an important historical lesson and warn of "ignorant and inflammatory proclamations" from Republican presidential candidates like Donald Trump recreating a dangerous environment to repeat the tragedies of the past.

"I was an infant in 1942 when my family and I were forcibly imprisoned at the Amache internment camp in Colorado," Honda wrote of being ripped from his California home. "I spent the next three years of my life living behind barbed-wire fencing."

The years long internment, Honda said, "instilled in me a lifelong belief that it is everyone’s responsibility to be vigilant and protect each other’s liberties."

Charging that the leading Republican presidential candidate's proposal to ban all Muslims from temporarily entering the United States is a ploy to "score cheap political points by preying upon the same climate of fear, hate and distrust that seized us after the Pearl Harbor attacks," Honda warned that the Republican Party is leading the nation down a "dangerous and un-American [] path."

"Such slanderous and unfounded comments only fuel suspicions against an already scapegoated community," he argued.

"Don't give in to the ignorance and fear of Donald Trump," Honda urged. "We must learn from the mistakes of our past to prevent reactionary policies that run contrary to the very nature of the freedom, rule of law and Constitution of our country":

Trump and others have successfully garnered attention with their provocative rhetoric, but that rhetoric has real consequences. Every day, there are threats to mosques and Muslim students, leaders and community members; in the last week alone, Muslim Americans were victim to at least 19 hate crimes. Political leaders and people who hold significant influence over the American people must take responsibility for their words. The price for TV ratings and cheap political points is forcing the more than 2 million Muslim Americans to live in fear of their own government and fellow Americans.

Our country is better than this. We are a nation that strives to foster openness, tolerance and equality—notions that are seemingly lost on political leaders that seek to make Muslims second-class citizens. Trump’s misguided plans are a far cry from making America great again; rather, Trump’s ideology would soon make America hate again.

"Our diversity is what gives us strength," Honda recalled, "and our respect for the Constitution, rule of law and American ideals is what unites us."

Watch Honda revist the internment camp his family was forced into from 1942 to 1945: