Jeb's jab lands: Bush gets under Donald Trump's skin at debate by slamming his posturing on ISIS

Jeb Bush flusters Donald Trump by pointing out his unseriousness, the way he resorts to insulting people 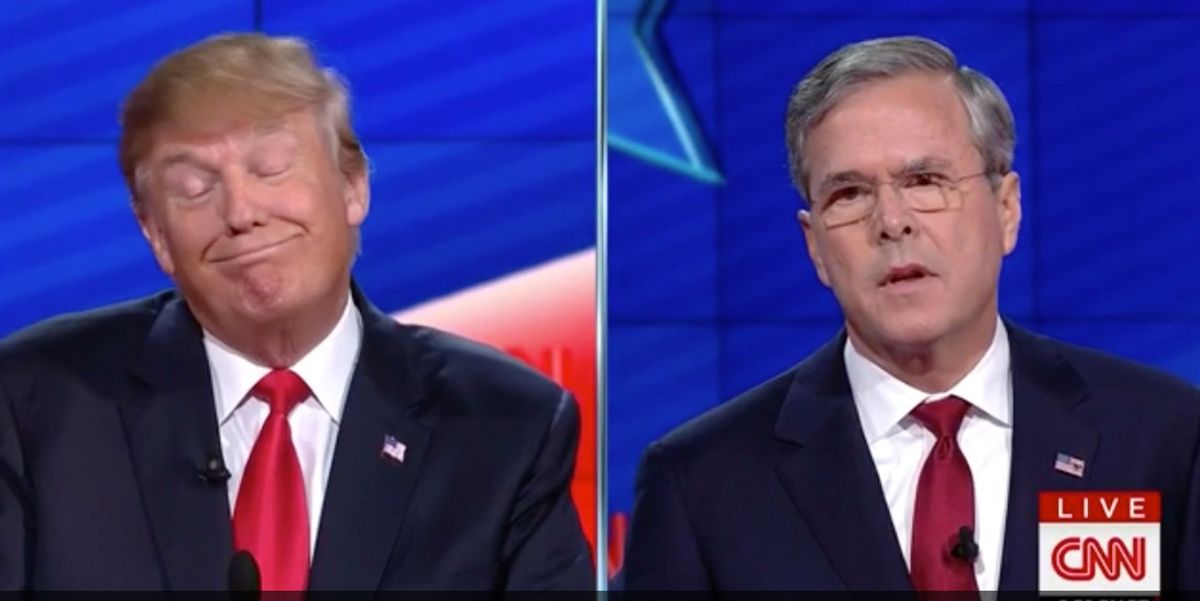 The war sabers were a-rattling during the Tuesday night CNN Republican debate and Jeb "Both The Other Presidents In My Family Started A War" Bush was ready to come swooping in to capture the pro-war excitement on the right. And he was not going to put up with Donald Trump getting the poll boost from this pro-war sentiment. His name is Bush! Starting wars in the Middle East is what they do!

"You said, in September 30th, that ISIS was not a factor," Bush said, triumphant.

A clearly flustered Trump resorted to his instinctual defense mechanism, the witless insult. "I know you’re trying to build up your energy, Jeb, but it’s not working," he sneered.

"Look, we need a toughness, we need strength, we're not respected as a nation anymore," Trump ranted. "We don't have that level of respect that we need. And if we don't get it back fast, we're gonna get weaker and weaker and just disintegrate."

After ranting that Bush says "they come across as an act of love" about Mexican immigrants, Trump said, "He's saying the same thing right now with radical Islam."

"Donald, you’re not going to be able to insult your way to the presidency," Bush replied, minor head shake. "Leadership is not about attacking people and disparaging people. Leadership is about creating a serious strategy to deal with the threat of our time." He then laid out his plan, which is increasing military spending and enforcing a no-fly zone in Syria.

Leave it to Donald Trump to tell a whopper so enormous---Jeb Bush loves radical Islam?---that you find yourself having a flash of sympathy for Bush. Then you remember that he, along with Lindsey Graham, is the last true adherents to the belief that George W. Bush knew what he was doing with the "war on terror", and you snap out of it.

Updated to add: Of course, Donald Trump will never, ever let someone else have the last word. Ever. A few minutes later, he got his revenge.

Whether or not pulling 42 percent makes one "tough" is debatable. But Trump's not wrong to think that Bush can win all the debates he wants, but the voters won't remember this when it's time to vote.