"Star Wars: The Force Awakens": You know all the spoilers in J.J. Abrams' obsessive reboot -- because you've seen this movie before

So the bad guy wears a mask, an orphan has special powers and somebody has a surprising dad -- sound familiar? 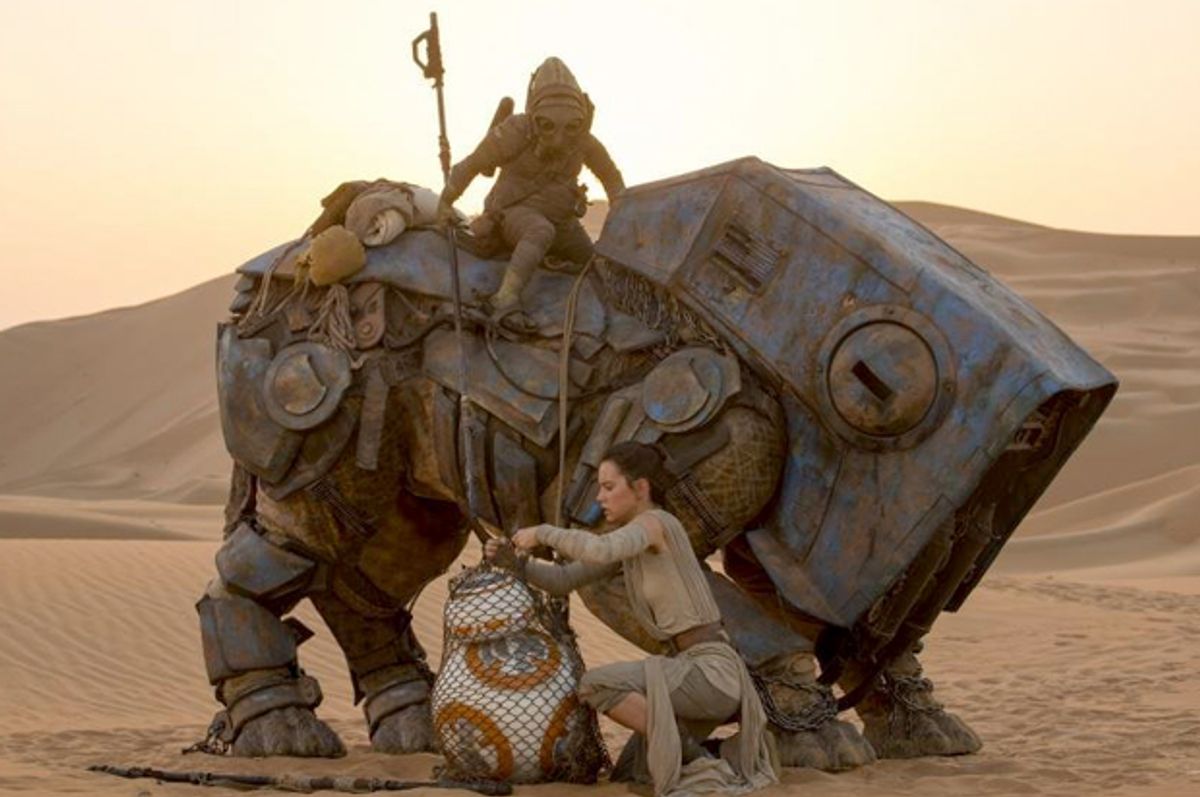 There I was, standing in line on 68th Street waiting to get into the New York press screening of “Star Wars: The Force Awakens” (a film you may have heard something about) and cursing myself for being the sort of person who follows the rules. I could see other critics, either through ignorance, deviousness or entitlement, cruising right around the line that everyone was supposed to stand in and skedaddling up the escalator to the theater. But it wasn’t especially cold out there, because we’re having a freakishly warm December, and the man and woman in front of me were having an interesting conversation.

They were friends but not a couple, entertainment journalists of the loyalist stripe who wear swag hoodies they were given at studio junkets and refer to all celebrities by their first names. The guy was saying that the buildup for J.J. Abrams’ “Star Wars” reboot was so intense, and he had spent so much time parsing the fine details of production stills and posters and the snippets of footage delivered in trailers, that he almost didn’t believe it was really a movie. Maybe we’ll get into the theater, he speculated, and find out that it was all a “Wizard of Oz” illusion or an expensive and elaborate prank. They haven’t made a new “Star Wars” movie, but “J.J.” will come out and tell us how awesome it would be if it existed.

Kind of a delightful idea, am I right? And in a certain sense, not all that far from the truth. J.J. Abrams is like a one-man industry of cultural recycling and repurposing, and everything he makes is in danger of being overshadowed by all the stuff it references. Having thoroughly botched the “Star Trek” franchise, whose ethos he never understood – yes, I’m bitter about that -- he has moved on to the one he wanted all along. “Star Wars” is a better fit for him, sensibility-wise, and everyone in Hollywood went to bed on Tuesday night feeling confident not just that Abrams’ relaunch will be a huge success but that fans will come back for second and third helpings.

There’s a movie to see when you get into the theater, all right, and I had a lot of fun watching it with a psyched-up crowd who cheered the theme music, the deliberately old-school title crawl and every reappearance of every old friend. Abrams has his failings as a director – his action scenes are frankly not that great – but by Hollywood standards he’s an economical storyteller who avoids unnecessary padding, handles emotional beats well and feels obvious affection for his actors and characters. “The Force Awakens” is an expertly made entertainment loaded with plot twists and revelations I have been sternly enjoined not to tell you about, even though most have been leaked already or guessed correctly by fans.

I don’t think it’s any secret that Harrison Ford and Carrie Fisher return in modest supporting roles as the aging Han Solo and Princess Leia (now a rebel general), although their scenes together are both wrenching and more than a little awkward. Abrams has found energetic and likable new leads in a pair of London-born actors, Daisy Ridley as a scavenger called Rey, who has untapped powers she doesn’t understand, and John Boyega as Finn, an Imperial stormtrooper who defects to the rebel alliance. There’s a hotshot pilot! There’s a Wookiee! There are whimsical droids, although mercifully not much C-3PO. (Even a little is a lot.) Everybody spends a lot of time and effort worrying about where Luke Skywalker has gotten to, and a map that might lead either Leia’s rebel forces or the reborn Sith-style warriors of the Dark Side to Luke is the movie’s principal plot MacGuffin.

Indeed, all the spoilers I could throw at you right now – but I won’t, I promise – would seem familiar, because the whole damn movie seems obsessively and insistently familiar. We have known for months or years that “The Force Awakens” would be a massive worldwide hit, and that would still be true even if it turned out to be about Jar Jar Binks and the Little Mermaid going on an underwater quest for the essence of Gangnam Style. It’s the Citibank of movies, literally too big to fail. But Abrams has grander ambitions than a Michael Bay-style cash grab. His mission is to build a new “Star Wars” franchise on top of the old one, and the ultimate success of that venture will largely depend on how the series’ millions of fans react to the fact that he hasn’t just made a movie fueled by nostalgia, or a movie full of mythic echoes. He’s made a movie they’ve already seen, a simulacrum of something that was already a simulacrum of something else.

For better or worse -- and here’s where my hoodie-wearing friend’s thought experiment comes in – “The Force Awakens” is more like a remake or a mashup of the first two “Star Wars” pictures than a sequel. Yes, in technical terms Abrams and co-writers Lawrence Kasdan and Michael Arndt are picking up the narrative some 30 years after the destruction of the Galactic Empire at the end of “Return of the Jedi.” But they barely even pretend to advance the story of the initial trilogy; they rewind it and repeat it, with new characters substituting for old ones but many of the same action set-pieces, narrative dilemmas and hidden connections.

Darth Vader has a copycat heir named Kylo Ren (Adam Driver, resisting shtick), who keeps his master’s melted helmet around and wears one of his own just to look cool. (He doesn’t need it to breathe, at any rate.) There’s an orphan who doesn’t understand his or her true powers, a spectral demonic figure who is using the Dark Side to conquer the universe and a bunch of pompous generals with Nazi-like uniforms and a planet-destroying superweapon. There’s a crazy bar full of aliens, a climactic battle on a catwalk inside a spaceship, an evil character whose good side may not be entirely dead, and the unexpected news that somebody is somebody else’s dad. I could go on, and when you see this movie you will too. In fairness, there are no Ewoks, and no Lando Calrissian. And why the hell not?

Whether Abrams’ obsessive-compulsive relationship to George Lucas’ 1977 original works for you is a subjective question, of course. You can choose to understand “The Force Awakens” as an embrace of the mythological tradition, in which the same stories recur over and over with minor variations. Or you can see it as the ultimate retreat into formula: “Let’s just make the same damn movie they loved so much the first time!” There are moments when it feels like both of those things, profound and cynical, deeply satisfying and oddly empty. This is the work of a talented mimic or ventriloquist who can just about cover for the fact that he has nothing much to say. He has made an adoring copy of “Star Wars,” seeking to correct its perceived flaws, without understanding that nothing about that movie’s context or meaning or enormous cultural impact can be duplicated.