Carly Fiorina is a liar: And everyone should finally just say it — loudly 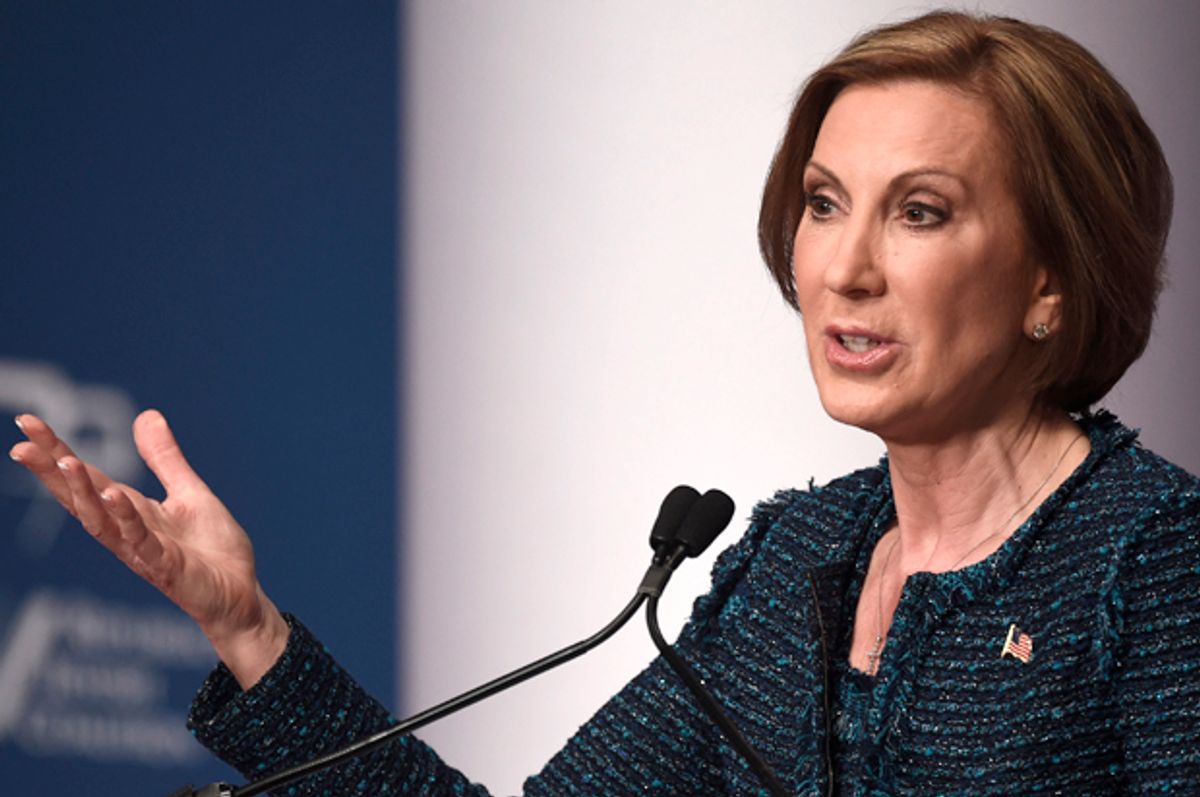 Carly Fiorina is unique among all the candidates in the Republican presidential field for her visceral, aggressive hatred for anything resembling truth. Other candidates lie, of course, but they at least go to the trouble of dressing up their lies with weasel words and other forms of qualifying language that allow them to squirm their way out of fact checks. Fiorina doesn’t care about any of that. She makes firm, declarative statements that are unquestionably inaccurate, and when confronted with inarguable facts that prove her wrong, she insists against all evidence that she is correct and bristles at the very notion that anyone might challenger her. She does not care. She does not pretend to care. As far as Fiorina’s concerned, the fact that she said it is what makes it true.

Up until this week, the prime example of this phenomenon was the Planned Parenthood video she claimed to have seen showing “a fully formed fetus on the table, its heart beating, its legs kicking while someone says, ‘We have to keep it alive to harvest its brain.’” That video doesn’t exist, and when confronted with the truth, she insisted her lie was true and lashed out at her critics with wholly un-righteous umbrage. “I’ve seen the footage. And I find it amazing, actually, that all these supposed fact-checkers in the mainstream media claim this doesn’t exist.”

That already egregious example of gross fibbery has, implausibly, been supplanted by an even larger whopper. At this week’s Republican debate, Fiorina listed off a number of retired generals – “Petraeus, McChrystal, Mattis, Keane, Flynn” – whom she would “bring back” into service. “Every one was retired early because they told President Obama things that he didn't want to hear,” she said. Citing David Petraeus made absolutely no sense – he retired because Obama nominated him as CIA director, and then he resigned because of a security breach related to the extramarital affair he was having. But invoking Gen. Jack Keane was the real howler of the bunch, given that he retired in 2003, a full five years before Obama was elected president. Keane confirmed to Fox News that he’s never even spoken to President Obama, and that Fiorina’s assessment was “not accurate.”

The easily checked historical record says Fiorina was wrong. The person she name-dropped said without qualification that she was wrong. It doesn’t get any clearer cut than that.

And yet, Fiorina insists she was correct:

Talking with reporters Wednesday after a town hall [in Nevada], Fiorina was asked if she misspoke about Keane given the timing of his retirement.

“No, I didn’t misspeak,” she said. “But he has been someone of great experience who has been highly critical of the way this administration has not taken threats seriously and unfortunately he hasn’t been listened to. I would listen to him.”

The irony here is that Fiorina is at this very moment not listening to Gen. Keane, because he’s trying to tell her she’s wrong and Fiorina is having none of it.

I’m fascinated by this pathological commitment to dishonesty, and also by the treatment it receives from the press. Reporters tend to be gun-shy when it comes to labeling untrue statements from politicians as “false” or “lies” because it’s assumed to be a form of improper editorialization. But in an instance like this, there is no way to plausibly interpret what Fiorina is doing as anything other than lying. And yet, the press still dances around the unquestionable dishonesty on display here.

CNN reported on Fiorina’s stubborn mendacity with the hilarious headline: “Despite facts, Carly Fiorina stands by claim about retired generals.” ABC News reported: “Carly Fiorina Digs in on Claim That General's Retirement Was Due to Obama Dispute.” Just call it false! Call it a lie! That’s what it is. The best headline I’ve seen on this story came from Mother Jones’ Kevin Drum, who wrote: “Carly Fiorina Really Likes to Make Shit Up.” That’s an accurate, concise explanation of what’s going on here, and no one should hesitate to call Carly Fiorina a liar when there is no doubt that she’s lying.