What the hell is Donald Trump talking about? His campaign runs on pathetic, white male despair 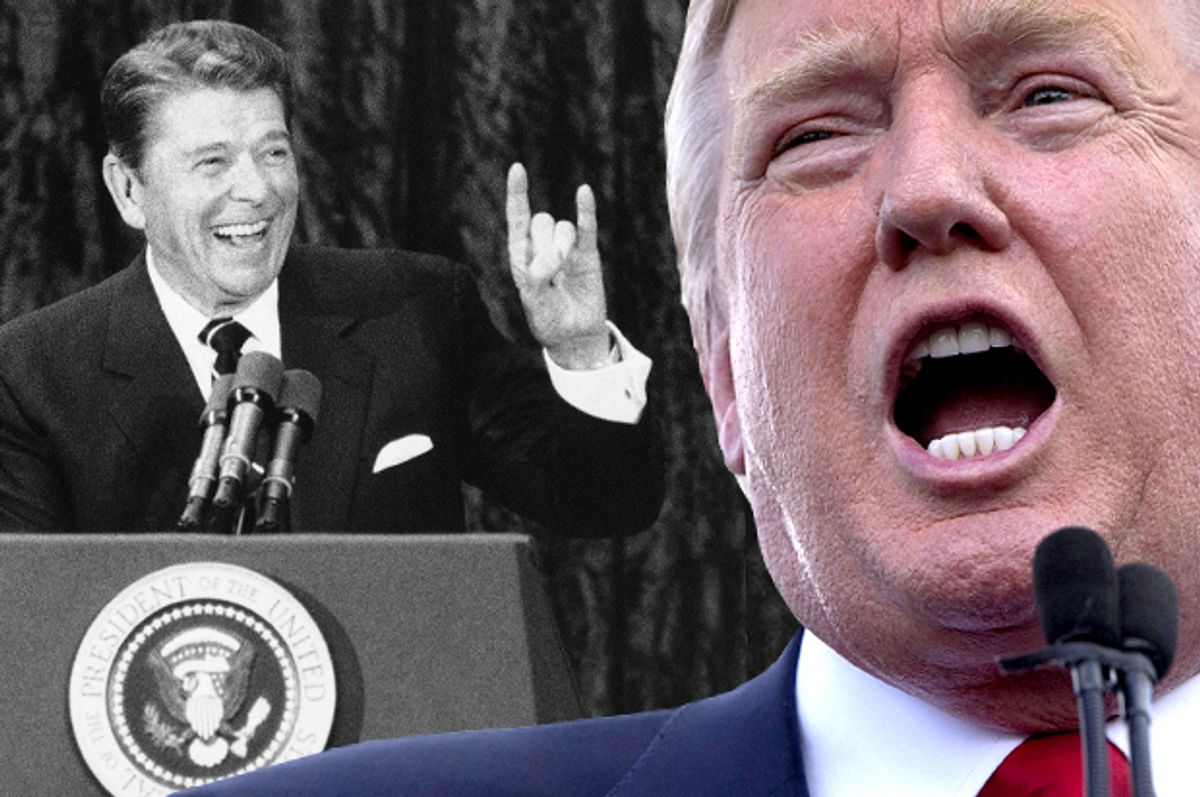 To read the mainstream press regarding who "won" the Republican debate on CNN Tuesday night, you'd think that Donald Trump took a major hit. The other candidates ganged up on him, he fell apart in the second hour, he was boring compared to an on-fire Ted Cruz, etc. etc.

But most of all, he was kind of a sourpuss. While all the candidates have an eye towards kicking out the current party holding the White House, and therefore are duty-bound to declare the current administration a failure, Trump's take on our nation's supposed woes is more existential and seems to be a despair that reaches far beyond just a distaste for the Obama administration.

“Our country doesn’t win anymore,” he said during his closing statements Tuesday night in Las Vegas. “Nothing works in our country. If I’m elected president, we will win again. We will win a lot. We will have a great, great country.”

Win? Win what? "What the hell is he talking about?" Fred Kaplan of Slate asked in an understandably exasperated piece. It was an especially strange lament from Trump, considering the dominant topic of the night was ISIS and Islamic terrorism especially, which is more a problem to be solved than some kind of contest that you "win."

Clearly Trump is talking about more than just the direct topic at hand and expressing more a general malaise that seems go back for decades. Or really, of emasculation, as evidenced by his sit-down meeting with fellow trust fund baby Dan Bilzerian, who praised the candidate on Twitter for supposedly beating back the "pussification" of America.

Let me clear the mystery up for you: Trump's strategy is to portray himself as the second coming of Ronald Reagan. There's this widespread myth in politics that Reagan's success was due to his talents at giving off a sort of sunny optimism, but the reality is that Reagan's success was due to tapping the exact same existential dread that Trump is tapping into. Reagan's campaign argument was that decades of civil right activism, feminism, and liberalism in general — or what gets dubbed "political correctness" now — had eroded the country's masculine vigor. Voting for him was as much an act of revenge as it was a vote for hope.

Trump isn't being particularly subtle about this. While he loves to claim authorship over the slogan  "Make America Great Again," any fool can figure out that this was a 1980 Reagan campaign slogan. The parallels run much deeper than a goofy slogan. Reagan's schtick was to claim that our country was rotten to its core and portray that as a kind of patriotism, to use nostalgia for some supposedly halcyon days of greatness as cover, and to wink at the idea that social justice is the source of all our supposed moral rot. Trump does all that, but he's just blunter about it.

But Reagan's appeal wasn't just about white guys being mad about uppity women and black people. One of the reasons that Reagan's emasculation narrative worked so well is that the country was still smarting from the Vietnam War. While liberals were feeling ashamed that we ever got into that debacle in the first place, for a lot of Americans, the real shame came not from joining the war in the first place, but from losing it. This required rewriting history, arguing that Vietnam wasn't a problem because we were there in the first place, but because the forces of what now would be called "political correctness" had so emasculated the country that we weren't allowed to win it.

In his book "Long Time Gone: Sixties America Then and Now," historian Alexander Bloom lays out how the conservative generation of the '80s went about rewriting history: Reagan himself was a big popularizer of this theory that we would have won if we had just been "allowed" to, as this 1981 clip from the Ocala Star-Banner demonstrates. Obviously, with all the war saber rattling and even nostalgia for the failed Bush administration on display Tuesday night, the argument could be made that all the Republicans are playing this game, arguing that Obama has somehow failed to defeat ISIS because he's afraid to unleash the dogs of war. They're full of it, of course, but that's the narrative.

But  Trump, like Reagan before him, knows how to spin that narrative into something bigger and more profound-seeming, to paint it not just as a failure of policy but as a failure of spirit. Everyone else tries to mimic what a politician talking about policy would sound like, but Trump's language goes beyond that. He is selling the same story as Reagan, the story of a fallen nation that needs a great restoration.

"Our country doesn’t win anymore," Trump says. It's nonsense language to political journalists, but to Trump supporters, he's tapping into a narrative they loved when Reagan was trotting it out and now: That we are, at our hearts, the country that kicked some Nazi ass and we can be that again if we're just allowed to be, if all these simpering liberals with their blather about "war crimes" were told to walk off a short pier.

It's a nonsensical narrative, of course — those quisling liberals were the ones who won WWII and it's the losers, the Nazis, who were really known for their willingness to embrace total war — but this kind of narrative isn't about reality. It's about speaking to this ridiculous sense of emasculation and promising there is a cure for it.

Of course, Trump is more a bad fan fiction version of Reagan than a proper reimagining. Reagan could take this narrative of resentfulness and overcompensation and put a cheerful spin on it that felt uncanny to his critics but made it easy for his supporters to feel like good people while voting for such a nasty man. Trump doesn't offer this solace to his supporters, as he eschews the artfulness of Reagan, making the subtext of Reagan's campaigning the very blatant text. Reagan argued through implication, kicking off his campaign near the site where civil rights workers were murdered and making a speech about "states rights." There was a plausible deniability to the whole thing you don't get with Trump, with his Muslim travel ban recommendations and his supporters yelling racial slurs and "sieg heil" at his rallies.

Perhaps this is why Trump, despite his popularity with conservatives, isn't really catching on with the rest of the country the way Reagan did. Trump's supporters are like readers of crappy fan fiction: Their longing to return to those glory days is so strong they are willing to accept an inferior product on the thin hope that they'll catch that feeling they had with the real thing.

Or maybe it's because the country is a very different place than it was in 1980. Boomer nostalgia for the supposed glory days of the mid-20th century has no appeal to younger generations. The loss of the Iraq War isn't the source of an existential crisis, but seen mostly as a disaster imposed upon us by the duplicitous Bush administration. If Reagan ran today, maybe he'd only be able to get die-hard Republicans while being held in contempt by roughly everyone else.

Let's hope it's the latter case rather than the former, because if this country is ready to hear a Reagan-like message of resentment and emasculation, so long as it's in a slicker package than Donald Trump, we might be looking at a President Ted Cruz in 2016.