Sheldon and Amy will finally get it on: How this "Big Bang Theory" storyline breaks new TV ground 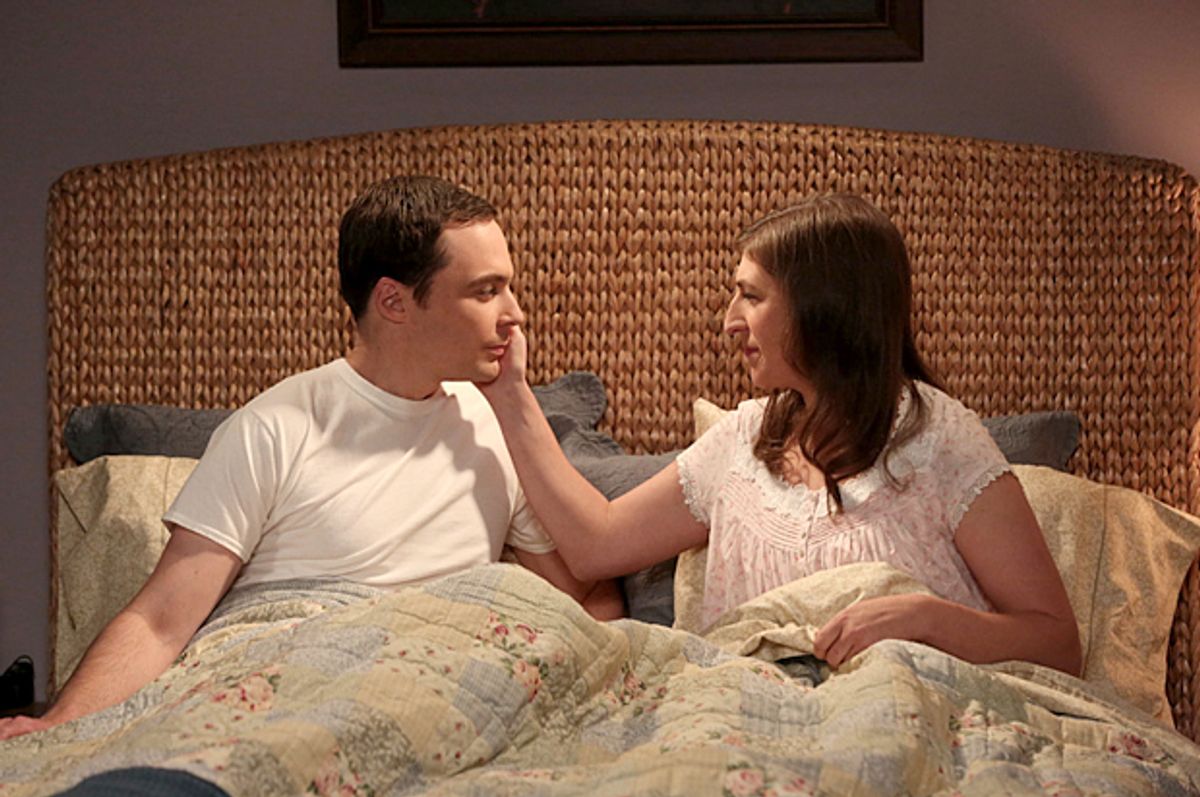 “Star Wars” or sex? That’s the immortal question being posed by the long-running CBS sitcom “The Big Bang Theory.” In tonight’s episode, Sheldon must choose between having sex with his girlfriend Amy for the first time, and attending the opening night premiere of “Star Wars: The Force Awakens.”

It’s a major milestone both for the show—now in its ninth seasons—and for its characters. According to actress Mayim Bialik, who plays Amy, this was not a decision the producers and writers took lightly. “It’s really special to us that we’ve had a relationship that is the longest-running nonsexual romantic relationship you’ve seen on TV,” the former child star told Entertainment Weekly. Because it’s a comedy, the pivotal moment is depicted with the prerequisite humor (Bob Newhart’s Professor Proton appears dressed as Obi-Wan Kenobi), but it’s also awkward, warm, and sweet.

Since the titular couple in “Mary Kay and Johnny” became the first partners to share a bed on television back in 1947, networks have struggled with how to depict sexuality honestly. CBS wouldn’t allow “I Love Lucy” to use the word “pregnant” on air, so the program had to explain Lucille Ball’s real-life pregnancy (incorporated into the show) by saying she was “expecting.” While we’ve come a long way since then (“How to Get Away with Murder” featured gay interracial analingus this season), television—and American culture in general—still struggles with addressing the topic of virginity.

Pop culture often depicts sexual intimacy in ways that are negative and implicitly shaming. In horror films, women are commonly killed after they have intercourse for the first time, and the “Final Girl” is defined by her purity, which protects her from violence. In teen dramas like “Buffy the Vampire Slayer,” “Felicity,” and “Gilmore Girls,” losing your virginity ends in misery and suffering. Buffy Sommers’ decision to have sex with Angel turns him into his doppelganger, the sinister Angelus, who then tries to kill all her friends. When Felicity Porter and Rory Gilmore experience intercourse for the first time, it’s the product of infidelity. “I didn’t raise you to be like this,” Rory’s mother, Lorelai, admonishes her.

These representations speak to our larger cultural baggage around waiting, particularly America’s fetishistic fascination with virgins. Russell Wilson and Ciara were treated like a public spectacle for their pledge to do it “Jesus’ way,” as the Seattle Seahawks quarterback claimed in an interview, while those who give it up “too late” are seen as innately weird—from Coldplay frontman Chris Martin (who lost his virginity as 25) to Judd Apatow’s “The 40-Year-Old Virgin.” Meanwhile, young Disney starlets make careers off their vows of chastity, as part of a brand model that sells sex while insisting that actually having it is strictly taboo.

There’s no better example of this than the late-90s/early-2000s pop stars Britney Spears and Christina Aguilera, who presented a reductive duality of female sexuality as either the Madonna or the whore. “Christina was able to monetize her position as the anti-Britney: a sexy star you could actually have sex with,” the Daily Beast’s Amy Zimmerman wrote. “But by maintaining her virgin status, Britney wasn’t rising above these sexual politics—she was also playing to a male fantasy, just one that required slightly less eyeliner.”

While the purity ring made a comeback in the late 2000s with celebrities like the Demi Lovato, Selena Gomez, and Miley Cyrus vowing to wait, these decisions tended to fall into the same reductive rhetoric. During the 2008 VMAs, host Russell Brand joked about the Jonas Brothers’ well-publicized abstinence pledges, and “American Idol” winner Jordin Sparks came to their defense: “I just have one thing to say about promise rings. It’s not bad to wear a promise ring, because not everybody—guy or girl—wants to be a slut.” When it comes to sex, you’re clearly damned if you do and damned if you don’t.

This no-win situation means that when it comes our myriad choices surrounding virginity, we still lack so much crucial information, even about our own bodies. That problem is, of course, a product of America’s pervasive abstinence-only sex ed programs, which leads to false ideas of what sex is and isn’t.

In the Atlantic, Nolan Feeney explains that there’s a cultural expectation that all women bleed the first time, due to popular myths about the hymen, and that can be dangerous. “Male partners' expectations of blood in particular sometimes leads women to take drastic, unhealthy measures: In How to Lose Your Virginity, [Therese] Shechter reports on women who sewed stitches into their vaginas to make sure they bled,” Feeney writes. Less extreme options include purchasing devices that simulate vaginal bleeding (by emitting red dye), and these have been popular in China.

As Feeney and others attest, our damaging views of virginity even come down to the words we use to describe it: “taking a woman’s virginity” or “giving it up.” Feeney argues, “They characterize women as passive with something to lose, and men as the aggressors with something to gain.” "Losing" virginity is portrayed as many things—a rite of passage, a life-changing moment, an act that deserves punishment, or a decision that could ruin your life—but these also define it as a form of violence. There’s little consent, affirmation, or celebration in “taking.”

That’s why we should celebrate television programs who depict human sexuality in ways that are more honest and reflective of its viewers actual experiences. In “The Big Bang Theory,” it might appear “unusual” that Sheldon and Amy have waited so long (the actors who play them are both over 40), but statistics from the Centers for Disease Control show that a significant portion of the population is holding out longer than we expect. Although Americans, on average, lose their virginity around the age of 17, over a quarter of men and women between the ages of 15 and 24 have yet to engage in sexual contact of any kind.

I want to see more television programs show sexuality for what it is—a fact of life, one with varied meanings for each individual. For some, having sex is a big decision and a sign of commitment, many might view intercourse as primarily for pleasure, and others might not have it at all. What we need is real education to normalize all of our experiences without stigma, but shows like “The Big Bang Theory” can help bridge the gap by depicting sex in all its beautiful, sexy, awkward intimacy.