While peddling their anti-immigration lies, Ted Cruz and other GOPers hide this about Obama: He's the Deporter in Chief

Both Republicans and Democrats are lying about U.S. presidents' deportation statistics — for opposite reasons. 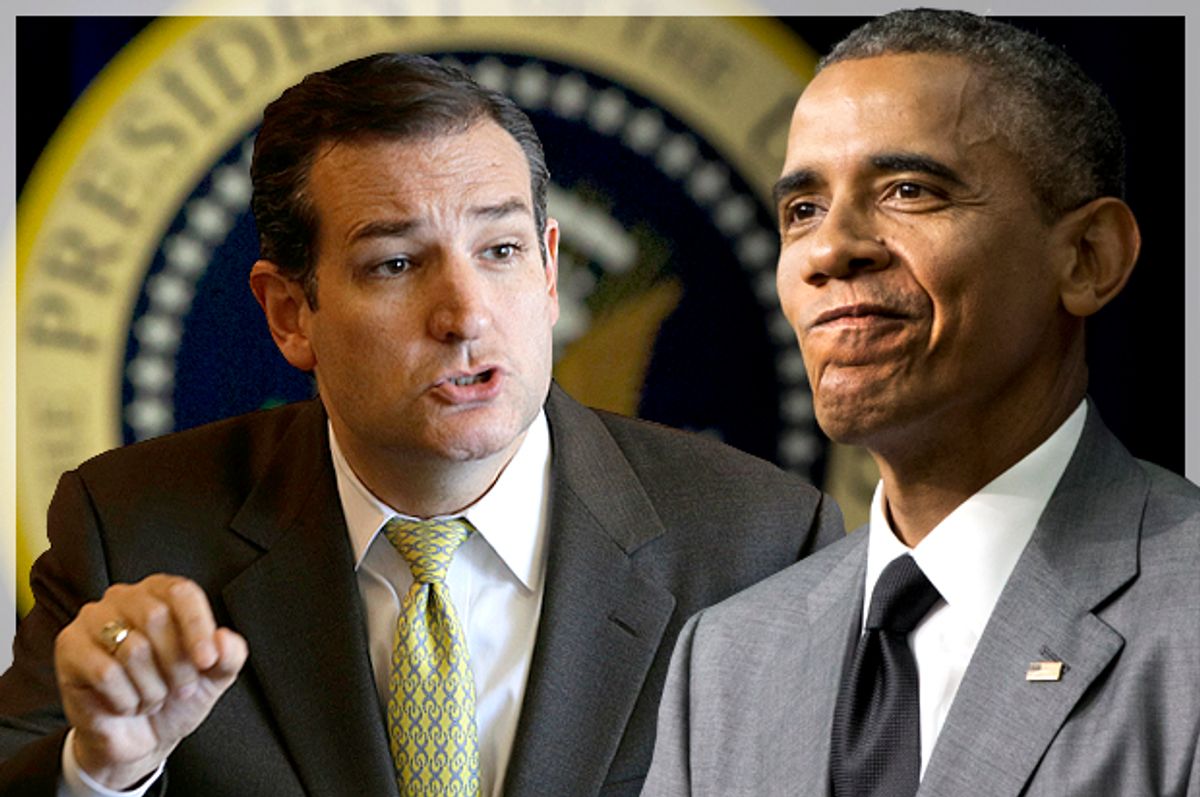 Immigration — like foreign policy — is one of those issues that both Republicans and Democrats frequently lie about, but for opposite reasons.

In every Republican presidential debate, candidates spar over who has the harshest anti-immigration stance. In the most recent debate, Sen. Ted Cruz lashed out at the Obama administration, insisting it has been lax on undocumented immigration.

This was among the most dubious of the factoids thrown around in the debate. The 12 million figure is sometimes tossed around by the right, but it is misleading at best — and a flagrant, downright lie at worst.

Cruz's statistic is based on a popular anti-immigration tactic. Opponents of immigration frequently conflate the different kinds of deportation, as if they were the same.

One of the biggest problems with virtually all of the discussion surrounding deportations is that the U.S. government no longer officially uses the term "deportation," and hasn't for 19 years.

The U.S. government dubs a "removal" what most people colloquially refer to as a "deportation," as the aptly named legal scholar Anna O. Law explains in a 2014 article in the Washington Post. In 1996, the government changed the official terminology it uses for deportations. When the government forces an undocumented immigrant to leave the country -- what was previously referred to simply as "deportation" — or when it denies entry to an immigrant trying to enter the country -- what before 1996 was called "exclusion" — this is officially considered a "removal."

On the other side of removals are what the U.S. government calls "returns." These are what were formerly known as "voluntary deportations."

Put more simply, removals are much harsher than returns. When people use the word "deportation," they frequently are referring to what the government considers "removals."

Both anti-immigration conservative pundits and Obama supporters rely on ignorance of these official definitions in order to play around with statistics to their advantage. They linguistically conflate removals and returns and, in the process, cover up the crucial political distinction.

Right-wing publication the Conservative Review employed the same tactic in a recent article claiming "Clinton deported four times as many illegal aliens as Obama." The piece defends Cruz' previous use of the dubious figure, claiming that President Clinton "deported 12.3 million immigrants during his presidency, almost four times the number of the Obama administration."

In order to bolster this claim, the Conservative Review lumps together both returns and removals. A graph that it posts in the article illustrates its misleading use of immigration statistics: As can be seen, the red columns, returns, have decreased since Clinton. The blue columns, removals, have consistently increased, however.

By using the word "deported," the Conservative Review can conflate these two distinct political categories, while glossing over the fact that removals have grown rapidly under the Obama administration.

Another conservative website, the Federalist, used the same strategy in order to, strangely, defend President Obama from criticisms.

The Federalist claimed the publication Vox was lying when the latter reported that "Obama is deporting more immigrants than any president in history." In order to do so, the Federalist used a graph that is very similar to the one later created by the Conservative Review. They even used the same color coding -- red for returns and blue for removals. In doing so, these publications are not arguing about Obama's immigration policy insomuch as they are simply arguing about definitions of terms.

As the graphs make patently clear, returns -- which were formerly referred to as voluntary deportations -- were the vast, vast majority of orders under Presidents Clinton and Bush. Removals, on the other hand -- the more serious deportation orders -- have skyrocketed under President Obama.

Reuters created a much more accurate graph showing how deportation has accelerated under Obama. Reuters only uses removal figures, which is the much more important metric: As can be seen, since the implementation of NAFTA and the consequent militarization of the border in the second half of the 1990s, the rate of removals has exploded.

The truth is neither what the Republicans say, nor what the Democrats insist. What we are left with is a peculiar situation in which conservatives are trying to downplay how harsh the Obama administration's immigration policies are, while liberals are simultaneously striving to claim said policies are less harsh than previous administrations. Both disingenuously combine return and removal figures, but for opposing reasons.

The reality is that the Obama administration has rapidly increased the number of removals. These are what immigration justice activists are referring to when they call Obama the "Deporter in Chief."

Obama's government, which is closely tied to the private prison industry and its lobby, has been increasingly supportive of harsh immigration policies and prison privatization. In the words of the ACLU, President Obama and conservative local governments like that of Texas "are colluding to detain refugee children in private prisons."

The private prison lobby is spending millions of dollars to pressure the government to keep a quota of arrested undocumented immigrants, in order to maximize profits. The Obama administration has been more than happy to oblige.

By ignoring the elephant in the room, conservatives and liberals alike are letting this enormous problem continue to fester and grow.