"Are you Muslim first or American first?": Frank Luntz digs into a Muslim American focus group

"I didn't push them as much as I normally push a focus group," the Republican wordsmith assured 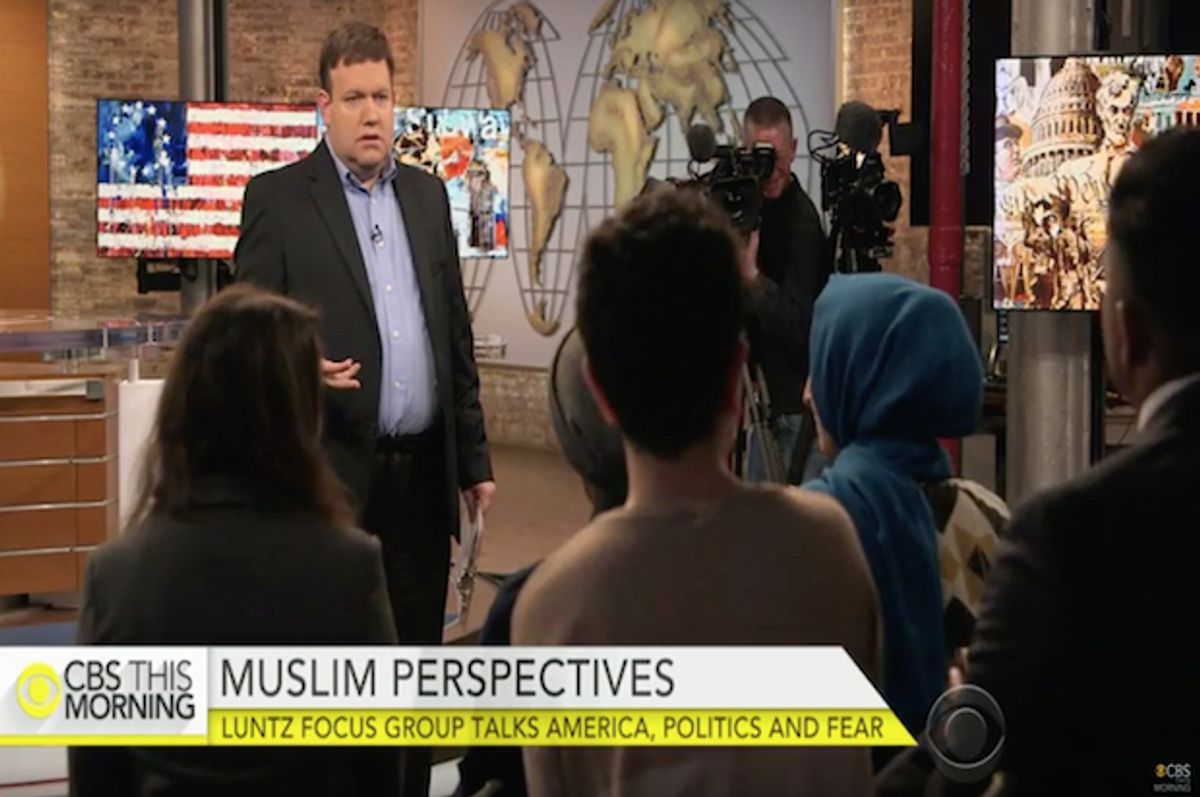 Republican strategist and CBS News contributor Frank Luntz recently held a focus group of 16 Muslim Americans at CBS News' Studio 57 in New York City to get their perspectives on the growing anti-Muslim rhetoric in the Republican party and its impact on their lives.

"How does it feel that your faith is at the core of one of the most disruptive, divisive, political conversations in a long, long time," Luntz began.

"It's important not to ignore the fact that all of this painful conversation is not necessarily positive," one female participant implored. "Oftentimes, there are manifestations of violence of this rhetoric."

"Now you said it's painful. How is it painful?" Luntz followed-up.

"Because it's – this is my faith," the woman responded. "It’s representative of who I am. And for me to see that it has been so demonized is painful and it’s scary."

At that point, another women who looked to be Muslim American New York City activist Linda Sarsour, illustrated the negative impact of the growing anti-Muslim sentiment in America.

“I actually did a call out to Muslim parents across the country to not watch the Republican debate in front of their children because I knew that, that – subjecting our children to hear the hateful stereotyping and the lumping of Muslims with terrorism in front of our children is actually something that psychologically impacts them,” she explained.

“But don't you want the kids to know the challenges that they face?” Luntz pushed back.

“I don't want my children to be subjected to racism and the vilification of their faith. I will not allow Donald Trump to tell my kids how they should feel about being Muslim,” Sarsour asserted.

"Do you understand why people are afraid," he pushed.

"How many of you are physically afraid?" Luntz asked. Nearly all 16 participants raised their hands.

At another point, the Republican pollster pressed a Muslim American woman: "Are you Muslim first or American first?"

Later on CBSN, Luntz claimed that he "didn't push them as much as I normally push a focus group," citing a pity he felt after hearing about their fears and concerns. "I didn't want to play into what they are already concerned about," Luntz explained.

"What would you have said then that you didn't say," the CBSN anchor pressed Luntz.

"You refuse to take responsibility for those who commit crimes in the name of the religion," the pollster replied, referring to his Muslim American panel.

Lutz admitted that there were more questions that he failed to press the participants on but argued that he "just felt that it was more important to hear their voices than it was to have an argument with them."

"The beginning of solving a problem depends on understanding that problem, and I do believe that listening helps you understand, Luntz concluded.

Watch both the Luntz Muslim American focus group and his analysis below: