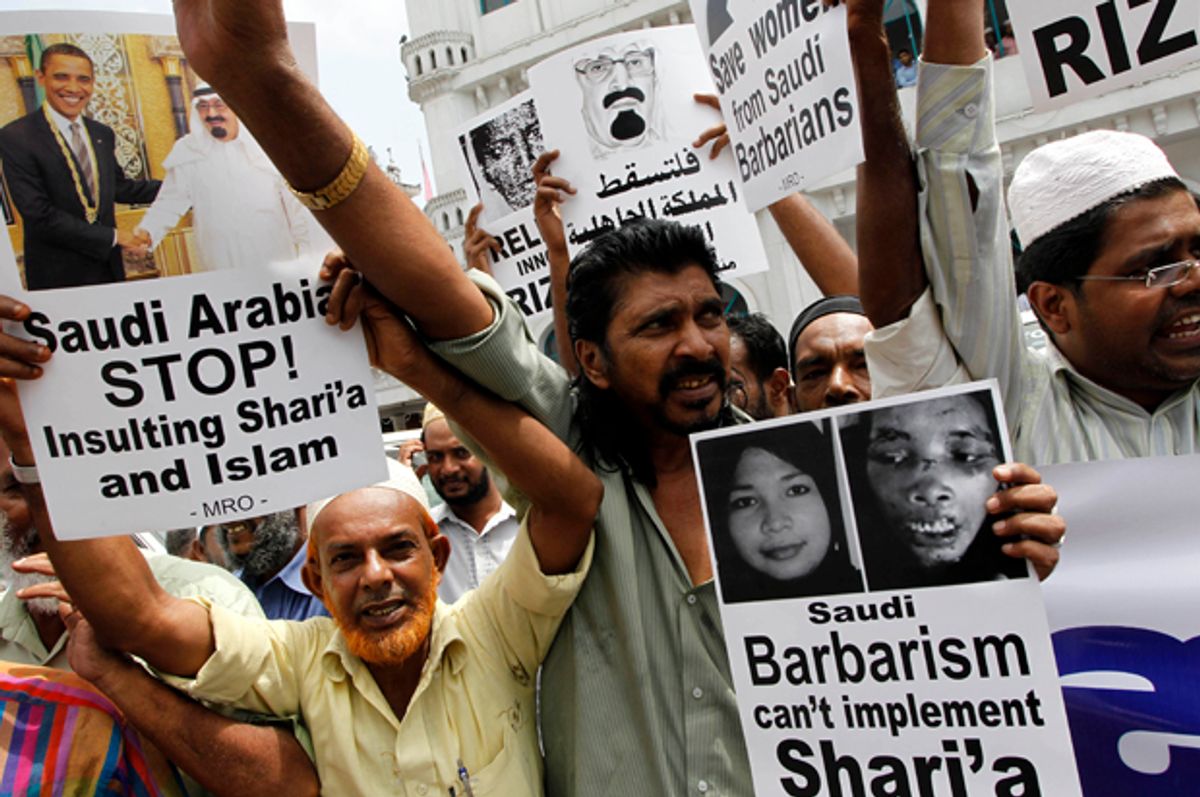 Abdullah al-Zaher was 15 years old when he was arrested for attending a protest in close Western ally Saudi Arabia. Human rights advocacy organization Reprieve said he was beaten on the spot by police and was subsequently tortured.

Now al-Zaher, who is part of Saudi Arabia's Shia religious minority, is 19, and is likely about to be beheaded by the absolute monarchy.

Reprieve told the British newspaper the Independent that al-Zaher "was the youngest in a group of juvenile offenders put on death row as part of a ruthless crackdown on political dissent in the conservative kingdom."

Al-Zaher is the third youth to face execution in the past several months.

Ali Mohammed al-Nimr  — a 17-year-old activist and the nephew of a prominent Shia dissident who was also sentenced to death — was arrested by Saudi authorities in 2012 for attending a peaceful pro-democracy protest. The teen was allegedly tortured, before the Saudi regime ordered him to be beheaded and crucified.

Dawoud al-Marhoon was also 17 when he was arrested for participating in a protest. Earlier this year, al-Marhoon was sentenced to death by beheading as well.

These three teens join a long list of dissidents set to be executed by the Saudi regime. In November, Saudi Arabia sentenced Palestinian poet Ashraf Fayadh to death for renouncing Islam and cursing the absolute monarchy.

Although a close Western ally, Saudi Arabia — which has the planet's second-largest oil reserves — is one of the most repressive regimes in the world. An authoritarian theocratic monarchy that bases its laws on an extreme interpretation of Sharia (Islamic law), it has frequently been compared to ISIS. In a November op-ed in the New York Times, Algerian journalist Kamel Daoud described Saudi Arabia as "an ISIS that has made it."

The Saudi regime has also been described by scholars as "the fountainhead" of Sunni Islamic extremism. Former U.S. Sen. Bob Graham called radical Salafi groups like ISIS and al-Qaeda "a product of Saudi ideals, Saudi money, and Saudi organizational support." Moreover, U.S. cables leaked by WikiLeaks show government officials like Hillary Clinton admitting that al-Qaeda and other extremist groups are supported by rich Saudi businessmen and even some members of the royal family.

Despite this, the State Department insists "Saudi Arabia’s unique role in the Arab and Islamic worlds, its possession of the world’s largest reserves of oil, and its strategic location make its friendship important to the United States." The State Department even goes so far as to call the Saudi monarchy "a strong partner in regional security and counterterrorism efforts, providing military, diplomatic, and financial cooperation."

In September, the U.S. State Department said it "welcomed" the news that Saudi Arabia would be heading a U.N. human rights panel, noting "We're close allies."

The Obama administration has done more than $100 billion in arms deals with the Saudi regime in the past five years. Less than three days after the Nov. 13 Paris attacks, the U.S. government sold another $1.3 billion of bombs to Saudi Arabia. The Saudi regime has used these weapons to arm extremist groups in the Middle East, including in Syria's civil war, and bomb Yemen, where human rights organizations say the coalition it leads is committing egregious war crimes, creating chaos that is helping al-Qaeda and ISIS take new territory.

Every four days, on average, the Saudi monarchy kills someone for drug-related offenses, even while its own princes are caught with thousands of pounds of illegal drugs in foreign airports.

Even though extremist Gulf monarchies like Saudi Arabia imprison or sentence to death anyone who challenges the regime, Western countries see them as important allies, primarily because of their enormous oil reserves.