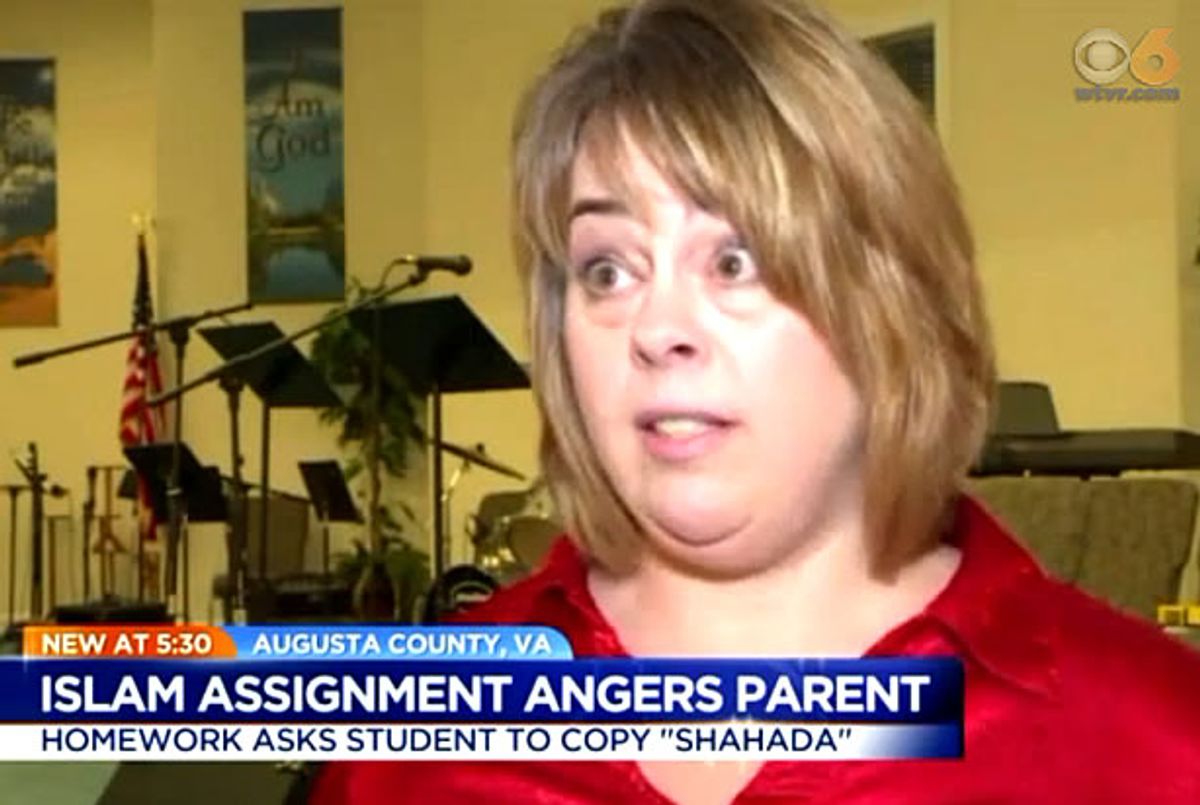 Schools and administrative offices in Augusta County, Virginia will be closed on Friday after a parent created an Islamophobic backlash by vehemently rejecting the legitimacy of an assignment that asked her child to learn about Arabic calligraphy.

Kimberly Herndon complained to WTVR that her son's ninth grade World Geography assignment required him "to copy the shahada, the Islamic statement of faith which translates to 'there is no god but Allah, and Muhammad is the messenger of Allah'" in Arabic -- a language the younger Herndon doesn't know -- as a means of understanding "the artistic complexity of calligraphy."

This calligraphy lesson -- the contents of which students would have to do independent research to understand, something ninth graders aren't wont to do -- focuses not on what the shahada means, but by the manner in which it is written. "Since Islam forbids idolatry, mosques are decorated with calligraphy rather than with pictures," and "[v]erses of the Koran, drawn in flowing Arabic, are bordered by complex geometric and floral designs." It then asks the students to "try copying the calligraphy in your own hand."

If this assignment is indeed a form of "Muslim indoctrination taking place here in an Augusta county school," as Herndon claimed on Facebook, it is perhaps the most inept form of indoctrination imaginable, accomplished through some manner of bilingual osmosis in which words the students didn't understand were implanted with their meaning intact in their ninth-grade minds. (That's literally the stuff of science fiction -- just ask Neal Stephenson, who wrote a novel about it.)

In her desire to condemn what is, essentially, a drawing exercise, Herndon conflates all Muslims with jihadists, claiming that the shahada is "the chant that is shouted while beheading those of Christian faith, or people of the cross as being called by ISIS," before proceeding to issue a chant of her own, concluding her Facebook post by writing "Blessed be the name of THE LORD. THE LORD OF LORDS AND THE KING OF KINGS. THERE IS POWER IN HIS NAME AND HE IS WORTHY OF ALL PRAISE."

Because of the media attention Herndon's ignorance has brought down upon the school district, "the school division began receiving voluminous phone calls and electronic mail locally and from outside the area...communications have significantly increased in volume today and based on concerns regarding the tone and content of those communications, Sheriff Fisher and Dr. Bond mutually decided schools and school offices will be closed on Friday, December 18, 2015."

Watch the WTVR report on Herndon's crusade below.

I am preparing to confront the county on this issue of the Muslim indoctrination taking place here in an Augusta county...