Inflicting more pain on Baltimore: Mistrial in Freddie Gray case yet another example of system failing us 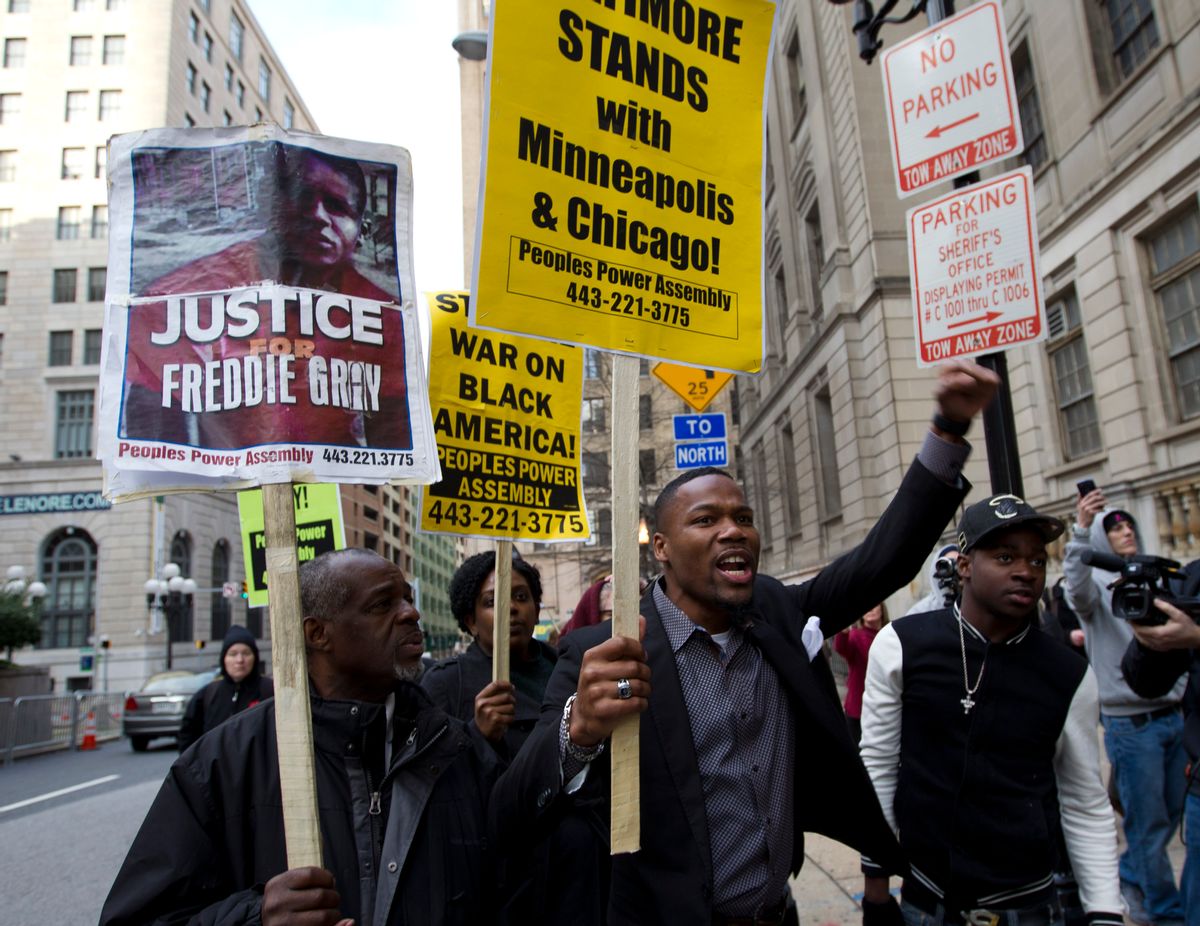 Demonstrators protest outside of the courthouse in response to a hung jury and mistrial for Officer William Porter, one of six Baltimore city police officers charged in connection to the death of Freddie Gray, Wednesday, Dec. 16, 2015, in Baltimore Md. (AP Photo/Jose Luis Magana) (AP)
--

For the first time in our life, my east Baltimore friends and I were rooting for a prosecutor — really cheering on the people who effortlessly send so man guys like us through the system over BS. We felt like the same system that works so perfectly against us was finally going to shackle one of its own, a cop who ensures that an all-too-often racist agenda is met.

Reality set in, however,  as William Porter — a 26-year-old police officer and alleged accomplice in the death of Freddie Gray and the first of six police officers to be tried in the case — gleefully walked out of the courtroom as a free man earlier this week after a mistrial.

Gray, the innocent 25-year-old unarmed African-American man, died as a result of being taken into police custody in April. His death brought national attention to Baltimore, shedding light on the same age-old systemic issues that plague the city, and sparked a historic uprise­­ — aligning him with Trayvon Martin, Sandra Bland, Michael Brown and Eric Garner as martyrs of modern civil rights movements.

Marilyn Mosby, state's attorney for Baltimore, injected hope into the city — maybe even our country — when she dumped charges on Gray’s alleged killers. Many of us who swore the system off slowly started believing. We believed that our elected officials were beginning to wake up and take notice to what’s going on in our black communities, but again, we were wrong and should’ve known we were wrong as the media dubbed Porter’s case “The Freddie Gray Trial.”

Why are they calling this the "Freddie Gray Trial" when Gray never made it to trial; he was killed before his day in court.Porter seemed more like a victim than the actual victim­ -- “He’s black and from west Baltimore too!" the media reported. “He wanted to change the stigma of police officers and make a difference!” How? How does one make a difference by subscribing to the same law enforcement culture that will murder blacks, at double the rate of whites this year even though we only make 13 percent of the population? Porter’s blackness doesn’t exist while he's in uniform and is overshadowed by the systemic racism that fuels the department.

We see how this racism works in the Freddie Gray videotape. The three white officers clearly dragged his limp body into the van; however, their superiors, examiners and the media were hell-bent on saying the injury happened in the van. So you’re telling me that Gray has been arrested more than 10 times, but this day he decides to sever his spinal chord in three places and then smash his own voice box? Really? We don’t believe that. We do believe that saying his injuries happened in the van will save those white officers we saw in the video.

We know that Porter didn’t purposely kill Gray, but he, just like the rest of the officers involved, was responsible for his wellbeing. They took an oath; it’s their job to protect citizens, especially innocent ones they falsely arrest and paralyze. Being too lazy to do some extra paperwork, or call an ambulance, or fuck up in some other way shouldn’t absolve him of his sworn responsibility.

Some jurors did what was right and I commend them for that, but it’s hard for me to imagine what shot through the hearts and minds of the ones who sided with the defense. They have to live in some sort of privileged reality where this could never happen to their fathers, brothers, nephews or sons. The kind of privileged reality that allows them to ignore the city's admitting its fault when it awarded the Gray family $6 million months before the cops went to trial, a privileged reality that allows them to be cold and heartless and not able to see any value in black life.

Some protest — 100 percent peaceful gatherings -- sprang up in different parts of the city. The ones I attended weren’t strategically planned;  it was a collection of hurt people like me, looking to be around like-minded individuals. Opportunists and slimy camera crews oozed out of every crack­­, shoving mics in the faces of anyone looking to talk, begging and praying for us to act out in rage, to give them another uprise to cover.

“D. Watkins, I read your stuff, man, nice work. Can we get your reaction to trial?” A fleeced reporter with a four-man crew asked.

Like many, I’m sick of stating the obvious. I’m even more sick of being uncertain about the future of our city. The outcomes of these cases are becoming more and more predictable. The unrest, property damage and national attention brought to Baltimore in April was enough to charge the cops but will it be enough to convict them? So far no; Porter was the test dummy. How will the city act if he gets off or if they don't try him again at all? Can we even find a jury that will convict him? In preparation, Baltimore sucked in cops from every surrounding county, the city looked like a cop retreat. They were placed all over the city, many with the same attitude and demeanor that further strengthens our divide.

Porter’s case set the stage for the rest of the police officers. Allowing him to walk, and not be held accountable for his actions, could potentially bring his fellow killers who wear a badge a similar fate. I think the officers were strategically tried separately to prevent a mass acquittal — which could have led to another uprising. I’m not sure that’s a foolproof plan because opportunity, and police relations with the community, has not changed much since the unrest. Politicians and black leaders are telling the city this is a part of justice and that we should stay calm. These people have money and benefit the system, so we aren’t listening.

My answer for Baltimore and to the rest of the forgotten populations in America is to rebel in a positive way that creates wealth and exposure. Figure out a way to work through or around the system so that we won't have to deal with cops. It’s apparent that our justice system is broken, or working perfectly for its creators, as it fails us over and over again.