It's the "clock kid" all over again: A 12-year-old Sikh boy is the latest victim of racist terrorism paranoia

In Dallas, Armaan Singh Sarai spent 3 days in juvenile detention after a classmate said his backpack held a bomb 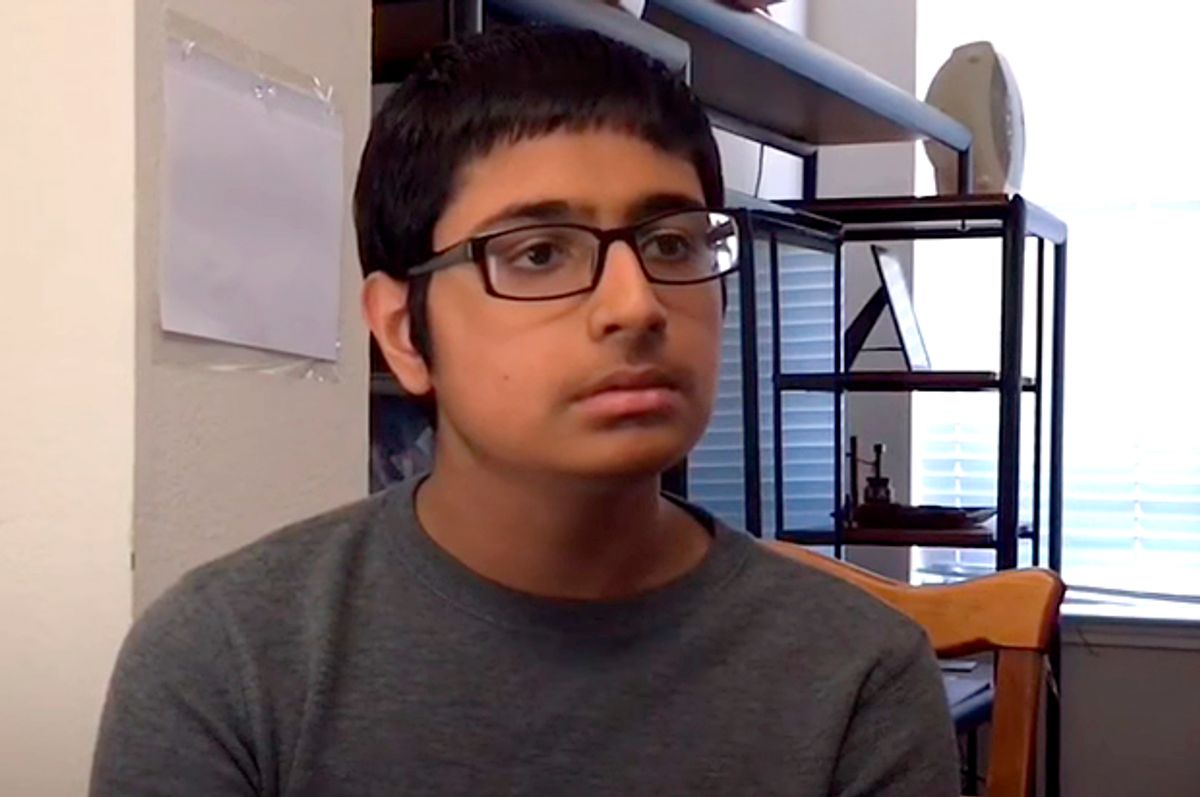 Imagine that your twelve-year-old son doesn’t come home one day after school. You’re always worried about him because he’s not even a teenager but has already required three open heart surgeries thanks to a congenital condition. He’s not a tough kid but a “goofball,” and you’ve recently moved from San Antonio to Arlington, a suburb of Dallas, Texas, where everything is bigger, including the trouble. Nobody is telling you where he is. Nobody will answer your questions. He’s just…disappeared.

School officials aren’t helping. Neither are the police. Eventually, you discover that he’s being held in a juvenile detention center. He’s born and raised in Texas. An American citizen. A kid.

Why did the Arlington police hold a twelve-year-old boy with a heart condition for three days without alerting his parents? Why did the school principal call the police in the first place?

Because his name is Armaan Singh Sarai, his working-class Indian family is Sikh, and a “bully” at his school accused him of having a bomb in his backpack.

"On Friday, December 11th, 2015, my cousin attended school, like any other normal 12 year old child. A bully in class thought it would be funny to accuse him of having a bomb, and so the principal, without any questioning, interrogation, or notification to his parents, called the police. Worried & frightened at home, his family was concerned as to why he had not reached home right after school. They started calling every police department in the area, only to find out he was sent to a Juvenile facility. They kept him held behind bars for three consecutive days, before finally releasing him on Monday, December 15th."

Armaan had carried a "power bag" to school, meaning his backpack has a built-in battery charger for a cell phone. Numerous companies sell these bags, which are not cheap but popular enough to be sold out right now in several styles and categories on Amazon. “The student in front of me, who is the one who made the accusation. . . said that [the backpack] looked like a bomb,” [Armaan] Singh said, per a report in the Washington Post. “Then Friday. . . I came back to that period and he was in front of me again and he said ‘I’m going to go tell on you. I’m going to go tell on you and say all this stuff about you. I’m going to go tell on you.’ Singh said he laughed at the other student, who did the same.

But the other student wasn’t joking. He made good on his threat, telling the teacher that Armaan had a bomb. The teacher told the principal, who called the police, which came to school and “grabbed” him. Now at home because he’s been suspended from school, Armaan must wear an ankle monitor as he awaits his court date. Though he is twelve years old, it is currently unclear whether he’ll be tried as a juvenile or an adult, and what charges he will face for the crime of carrying a trendy backpack to school.

There are more than a few parallels to “clock kid” Ahmed Mohamed, who was fourteen years old and living with his family in a Dallas suburb when he was accused of bringing a bomb to school. But the specifics of Armaan’s situation more closely resemble the targeting of Veereender Jubbal, a Sikh who was set up to become the face of terrorism after the November 13 Paris attacks. Veerender is not a Muslim or a terrorist. He’s a Canadian. But, like Armaan, Veerender has a goofy sense of humor and loves to play video games, and he was maliciously targeted by racist individuals in the gaming community who knew that he had no involvement whatsoever with Islamic extremism, but went ahead and labeled him a terrorist anyways. Newspapers around the world picked up a doctored image of Veerender which had falsely identified him as one of the 11/13 Paris bombers, thereby placing his life in real danger. Since November 23, after being inundated with vitriol and threats, Veerender turned himself into “Ghost Veerender” and went on a Twitter hiatus.

In Armaan’s case, a nameless “bully” targeted the most vulnerable kid in striking range at his school: a boy with a serious heart condition who was not only the new kid but whose race and religion identified him as an outsider. The bully chose his victim well: the police are vociferously defending their actions despite no evidence of any wrongdoing on Armaan’s part. Instead, at every step of the way, the bully’s lie was supported, endorsed, and reinforced by the actions of every adult authority figure who ought to have known better. That they did not is far more troubling than a child acting cruelly. The institutional response is only comprehensible inside a racist framework that makes it seem reasonable to assume that all brown people are Islamic extremists conspiring to blow up white Americans, and presumed to be guilty rather than innocent.

“Protect and serve? My ass,” the Sikh bank clerk complains in Spike Lee’s film, “Inside Man,” 2006, about a confounding bank heist where the police are unable to distinguish the hostages from the criminals, and so they treat the victims as if they’re violent felons. “Where’s my turban?” the bank clerk asks angrily. “I’m not talking to anyone without a turban. It’s part of my religion to cover my head as in respect to God. I’m a Sikh. Not an Arab, by the way, like your cops called me outside…First you beat me and now you want my help…Fucking tired of this shit. What happened to my fucking civil rights? Why can’t I go anywhere without being harassed?”

It shouldn’t even be relevant that Sikhs are not Muslims, because being mistaken for “an Arab” isn’t the nut of the problem. What’s wrong is being attacked and bullied, period. What's worse is the cultural condoning of such violence. Yet numerous reports have not only been tracking a surge of Islamophobia since 9/11 and the spike of hate crimes against Muslims since 11/13, but also they’ve also repeatedly pointed out--in tones of near despair—that, collectively, white Americans are fine with it. Islamophobia is so thick and pernicious that a shameful number of Republicans (and Democrats) are in favor of bombing Agrabah  just because it's somewhere in "Arabia" — when it's actually the fictional setting of the Disney film "Aladdin."

Given the difficulties of countering the Disneyfied geographic imaginary, it shouldn't be too surprising that in Texas, racist paranoia has made it possible for a bully to accuse brown kid of bringing a bomb to school, and the institutions of education and law enforcement rush to validate the accuser, not the victim. In this era of “see something, say something,” an increasingly intolerant political narrative affirms that the bully did the right thing. Things you learn by going today to school and obeying the rules.