This is why Stephen Colbert keeps losing to Jimmy Fallon

At the moment Bruce Springsteen is on Fallon, here's the brilliant but bizarre bit done by Colbert 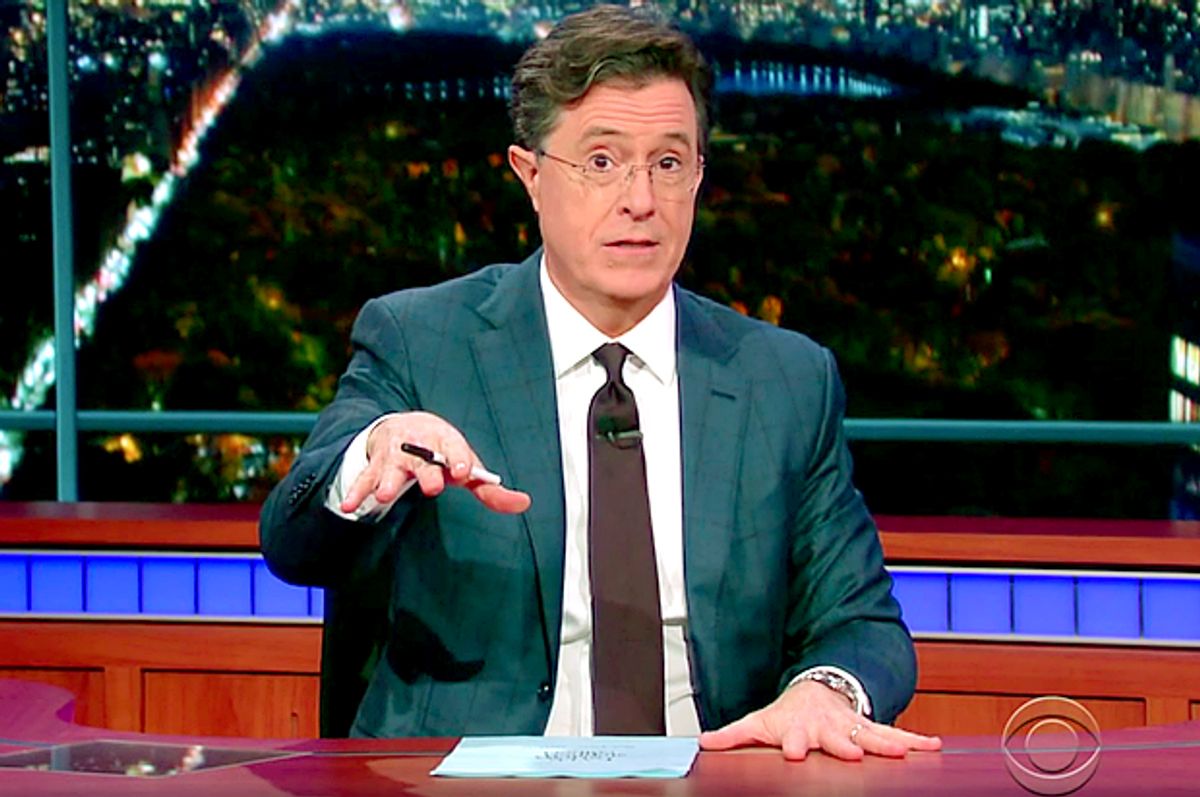 "Late Show" host Stephen Colbert is about to go on a two-week vacation for the holidays, so he wanted to know if a few of the international destinations were safe places to take the wife and kids. Good thing Samantha Power, who is serving as the president of the UN Security Council for the month of December, was on hand to give her expert opinion on travel safety.

UN Security Council president is a rotating position that is alphabetical by the country's name, so the U.S. is always going to be in the back of the class. But that doesn't mean Samantha Power isn't doing anything with the position.

"We have had historic sessions," Power said. "This month we had the first ever Security Council session on human trafficking on sexual slavery, which is rampant."

Power told a story of a woman whose family was killed by ISIS and who was then enslaved as a sexual servant by ISIS. "This brave woman stood up before the world and made the case for two things: One for the fight against ISIL but also for why we should admit refugees to this country and other countries because that's why people are fleeing.

Power says the Obama administration will be accepting refugees as a signal to the Muslim world that the United States is not representative of the hateful rhetoric that has been coming out of "some people" for the last several months.

Colbert then asked Power about his upcoming Christmas vacation with his family in the two weeks that he's off. Like Afghanistan, "should I go there, or is Samantha Power going to bum me out?" Colbert asked after reading a "Price Is Right" kind of announcement about the virtues of the country's beauty.

"Parts of the country are stable. Other parts are not," Power began. "Maybe I would wait a bit longer until the security situation is locked down."

But what about Crimea? "A true Black Sea paradise with picturesque mountain ranges, lush forestry and miles of sun-drenched beaches. Crimea: It's kind of Russia!" Colbert read.

"No!" Power exclaimed at the idea it is "kind of Russia." "Crimea is part of Ukraine. Unfortunately, since the Russian Occupation, again the human rights conditions, deplorable people disappeared. You don't want to go there unless you want to get disappeared."

"I want to drop off the map for two weeks, but I want to come back," Colbert said. He then asked about Cuba, which Power said that even though the embargo has been lifted, the only people being allowed to visit are strategic to empower those helping with education about the United States and democracy. So you still have to be on the approval list."

Another great moment in the show Colbert references in his question about Crimea is about Putin's walk. In his opening monologue, Colbert mocked the way Russian President Vladimir Putin walks. Evidently, a team neurologists studied the way Putin struts his stuff calling it the "gunslinger's walk" because he always keeps his right arm stiff against his body while his left arm sways. They say this is from his KGB training, keeping his hand in position to grab his gun. As a result, Colbert says President Obama needs a more badass walk and Colbert has a few ideas.

Check out both videos below: