"Well, I enjoyed that more than I thought I would": For all its faults, "The Big Bang Theory" gets Sheldon and Amy's big night right

The CBS show hits a landmark in its 9th season, as Sh-Amy finally gets laid 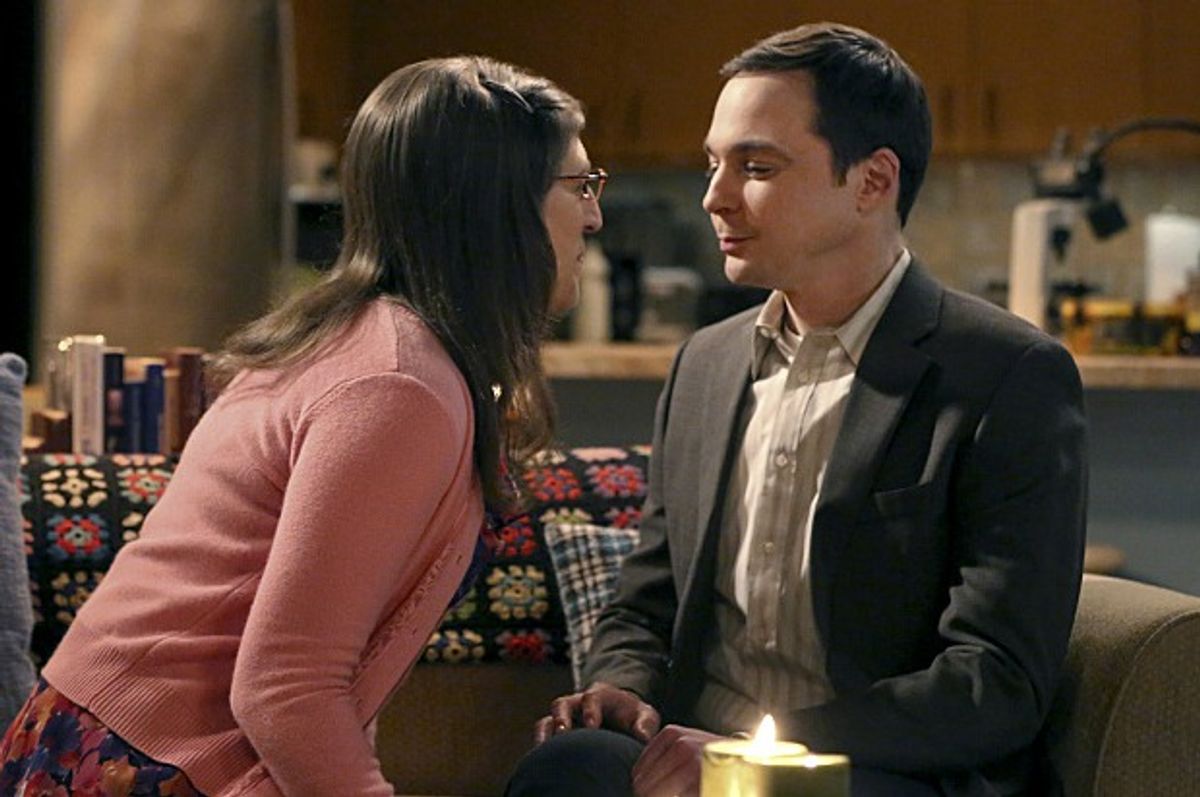 “Well, I enjoyed that more than I thought I would.” These are Sheldon’s (Jim Parsons) words to Amy (Mayim Bialik) when we first find them post-coitus; in the fade-to-black break between scenes, Sheldon finally had sex with his longtime love interest and on-and-off girlfriend, Amy, on the occasion of her birthday. That’s a fair appraisal of the episode, too. “The Opening Night Excitation” (yikes) tells the not-awful story of how Dr. Sheldon Cooper, B.S., M.S., M.A., Ph.D., Sc.D., has intercourse for the first time—by juxtaposing the anticipation and anxiety of the build-up to the event with the anticipation and anxiety of another, equally world-shattering event: the new "Star Wars" movie.

It is true that “The Big Bang Theory” has matured, but it’s also true that it’s never quite reached maturity. CBS’ show—the most-watched sitcom in America—is also one of television’s most frustratingly retrograde, a bizarre play-act of caricatured “nerd” behaviors that, it often seems, exists for other people to laugh at. “The Big Bang Theory” could, with some referent tweaks, take place in the ‘60s; the show’s notion of social dynamics, right down to the fashion, would not be terribly out of place 50 years ago.

But, it’s certainly come a long way. At first, the show’s primary comedic dynamic was between Sheldon and his across-the-hall neighbor Penny (Kaley Cuoco), who alternately represent either the unsocialized nerd or the dumb blonde, depending on what the situation required. It made for a comedy where nearly every joke came at the expense of a main character, and both were broad stand-ins for huge subsections of the culture, be that “women” or “nerds.” There’s still quite a bit of that—including in last night’s episode—but with two more regular female cast members, the show has lost a bit of its treatment of women as exotic creatures who don’t know from nuclear physics.

What it has retained is the show’s sense that its characters—and, maybe, all of us—are trapped in high-functioning but perpetual adolescence, where the identities and allegiances made in the battleground of high school still define adult experience. The show’s four lead men—Howard (Simon Helberg), Leonard (Johnny Galecki), Raj (Kunal Nayyar), and Sheldon—are are very much in a state of overgrown teenage existence, unable to focus on much else except action figures, movie franchises, and, naturally, girls, despite having nearly a dozen advanced degrees between them. Each started the series with a different nervous tic around women—Raj had “selective mutism,” Howard (now married) comes off as “creepy,” and Leonard mashes together words and concepts when he’s nervous, along with trying to hide his geek identity entirely.

And Sheldon wasn’t interested in girls. Or boys. Or sex, at all, really. Unlike his friends, who were just unable to get laid, Sheldon was both (probably) unable and apparently uninterested. In the original pilot, that wasn’t the case; Sheldon had both a sexual history and a manifest sex drive. As related by Brian Cronin, creators Chuck Lorre and Bill Prady discovered during test screenings that the audience felt very protective of the two male roommates, and cast aspersions on original “street smart” female neighbor that lived across the hall. She was rewritten and recast to become Cuoco’s Penny; and somewhere in that process, Sheldon lost his sexuality. This was amplified when Bialik’s character Amy joined the cast, because her disinterest in sex matched Sheldon’s; they both were more focused on their intellectual pursuits than their physical. For a brief period of time, Sheldon and Amy were a functional on-screen asexual couple, which is not something that existed otherwise on television. (Last night was Amy’s first time, too, but as the lead character who had never even kissed a woman before Amy, Sheldon’s decision to “coitus” seems more notable.) It inspired blog posts and thinkpieces devoted to celebrating the show’s decision to feature two asexual characters.

And yet, over the course of the last few years, that framing has been quietly erased—mostly because, from what I can gather, Lorre felt that the show needed to move in some kind of direction, and Parsons, as Sheldon, is the lynchpin of “The Big Bang Theory.” So first, Amy developed an interest in having sex with Sheldon—leading to occasional trickery, on her part, to get him to touch her. Then, as the two progressed to kisses, Sheldon appeared to begin to enjoy it. And last night, for Amy’s birthday, Sheldon had three ideas: a trip to the Los Angeles Philharmonic, a trip to a sheep and wool festival in Wisconsin, or “coitus.” Penny and Bernadette (Melissa Rauch) not-so-subtly suggest the last option, leading Sheldon to proclaim, “Then it’s settled. Amy’s birthday present will be my genitals.”

“The Opening Night Excitation” features Sheldon making the difficult decision to forego the premiere of “Star Wars: The Force Awakens” to spend Amy’s birthday with her, consulting, when relevant, Professor Proton (Bob Newhart, as a fictional science game-show host that appears in Sheldon’s dreams, and for this very special episode is dressed as a Jedi). Leading up to the event is an awful lot of poking fun and spit-taking. When Amy finds out—through gossips Penny and Bernadette—that “coitus” is on the table, she yells “You shut your damn mouth!” before springing into action, getting a bikini wax and lighting every candle in her apartment. When Sheldon asks Professor Proton for sex advice (of a sort), Proton tries to commit seppuku with his lightsaber, and fails, because he is a figment of Sheldon’s imagination. And when Sheldon suggests to Penny that getting physical might be a good birthday present, Penny theatrically shatters the wine glass in her hand with one clenched (and presumably surprised) fist.

And yet the moment itself, when it does finally arrive, is devoid of arch commentary. Sheldon comes over, in a suit and carrying flowers, and says, “I also got you a balloon, but it floated away, and I chased it for a while.” Amy is nervous, and confesses to knowing already. And despite the awkwardness and strangeness of the situation, Sheldon and Amy finally manage to have sex for the first time in way that is both cute, awkward, and ultimately, rather heartwarming. Amy expresses anxiety of not knowing what’s about to happen; Sheldon says, very earnestly, that they can find out together.

“The Big Bang Theory” is capable of some occasionally lovely character beats, and this is no exception. What’s odd is how vigilantly the show undercuts its own sense of empathy. The fans who praised the show for its inclusion of asexuality ended up turning away from it, noting that “sexlessness” or “prudishness” were turned into fodder for derisive jokes from the other characters. Penny is particularly guilty on this front—used as “regular person” foil across, most often, Sheldon. It is returned in kind, of course; Sheldon can be particularly cruel to Penny’s non-scientific (read: dumb, read: female) mind. The result is a show that does a disservice to both nerd culture and women, usually one at the expense of the other. To use some academic parlance, the dynamic between Sheldon and Penny is quite a coup of mainstream media’s hetero- and gender-normative lens; both are constantly being shamed by the other, either to their faces or behind each other’s backs. (And as it happens, Sheldon’s “couple name” with Amy is, per Howard, “ShAmy,” lest there was some doubt as to the show’s particular intentions.)

I wrote above that the characters of “The Big Bang Theory” are caricatures, and that leads to another important point. Other shows, even multi-camera sitcoms, try for various degrees of verisimilitude. On top of that, given that “geek culture” regularly rakes in billions of dollars in corporate sales and women actually do like "Star Wars" films, in more than a few ways, “The Big Bang Theory” exists in a version of the culture that doesn’t reflect reality. What it generally does, instead, is create a “safe” venue for the audience to laugh at some on-screen characters, whether that is for their nerdery or their lack of understanding of it. Sheldon, Amy, and their friends are farcical characters in an elastic universe, existing as much to be laughed at as to be laughed with, and there’s a degree to which that is either very funny or very uncomfortable, depending on your tastes. As viewership has demonstrated, there’s a healthy appetite for a show that offers up a few reliable caricatures to laugh at; and as the show has demonstrated, with moving towards and then away labels like “asexual,” it is not interested in being either revolutionary or representative. “The Big Bang Theory” is a show where no one strives to be anything more than they are, and there are times where that is very frustrating; not only do its characters’ moments of insensitivity get a pass, but you get the impression, too, that Sheldon would be a totally different person with just a few months of therapy. But when it comes to having a romantic night of “excitation” together, the show’s approach to accepting the general lameness of people makes a whole lot more sense.