Howard Beale would be mad as hell: Donald Trump, Les Moonves and the sale of American democracy 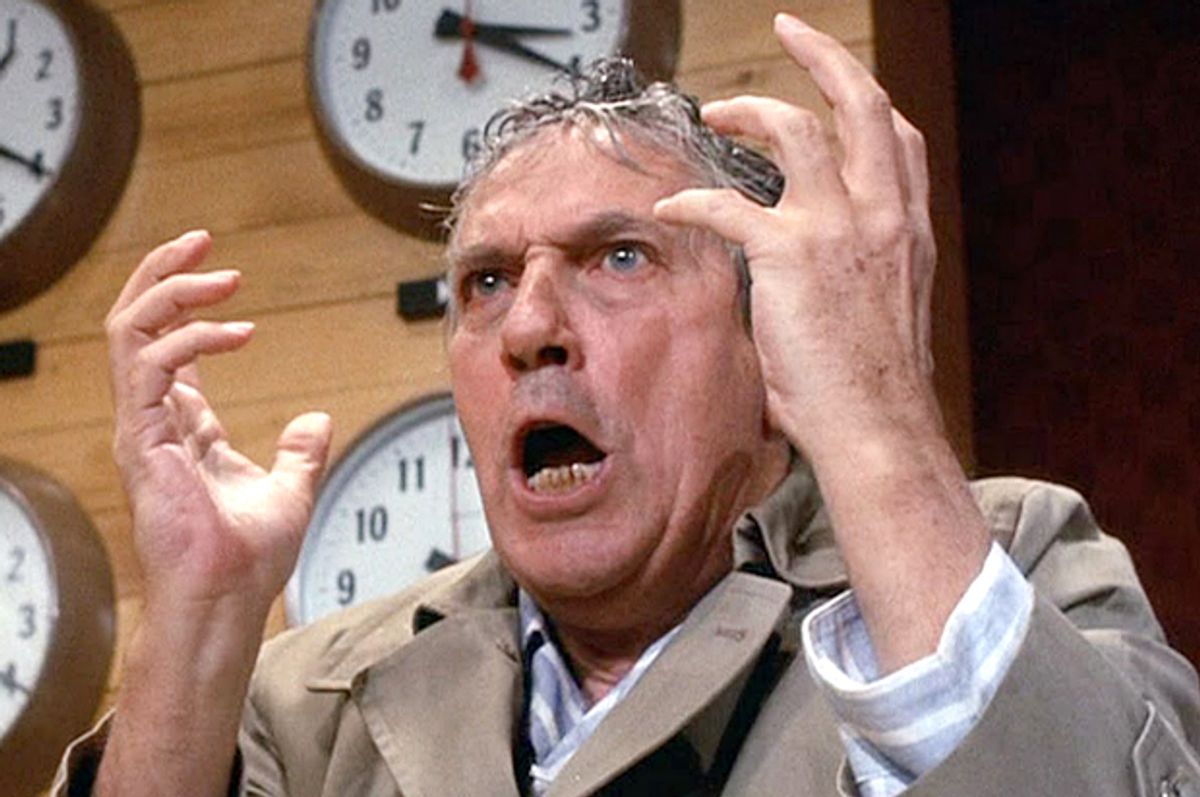 Television news has gone off its rocker and turned our politics into the equivalent of a freak show’s hall of mirrors.

The networks have grasped Donald Trump to their collective bosom like the winner of one of those misogynistic, televised beauty pageants he owns. Each pronouncement from the Sultan of Slur is treated as epic, no matter how deeply insulting, bigoted or just plain ridiculous.

You may have seen by now that recent Tyndall Report analysis of the nightly news shows on ABC, CBS, and NBC. It found that from January 1 through November, the big three had devoted 234 minutes of reporting to Donald Trump but only ten to Bernie Sanders. At ABC,World News Tonight had given the Trump campaign 81 minutes of coverage while Bernie Sanders has received less than a minute. A minute!

Our friend and colleague John Nichols at The Nation magazine says that it’s useless to try to get the networks to dial it back; every Trump bellow leaves them begging for more. Rather, he writes, “When a candidate is playing to the worst fears of Americans, what’s needed is more serious and intensive coverage that puts things in perspective… The point is to recognize that there are other candidates who are getting as much support as Trump, that are exciting crowds and gaining significant support, and that are advancing dramatically different responses to the challenges facing America. That’s not happening now.”

Big surprise, the problem is money. Tons of it. Trump brings ratings and ratings raise advertising revenue. What’s more, in an insane election cycle like this one, cash already is pouring in from the production, sale and placement of political TV advertising, cash that also makes television executives and political strategists wealthy. Here’s CBS chief executive Les Moonves at an investor presentation last week, cheering on Trump and the other Republican candidates: “The more they spend, the better it is for us… Go Donald! Keep getting out there. And you know, this is fun, watching this, let them spend money on us… We’re looking forward to a very exciting political year in ’16.”

This is the same Les Moonves who declared during the 2012 campaign, “Super PACs may be bad for America, but they’re very good for CBS.” And earlier this year, on an investors call, he said, “Looking ahead, the 2016 presidential election is right around the corner and, thank God, the rancor has already begun.” You can hear the fictional Howard Beale of Paddy Chayefsky’s Network spinning in his fictional grave, still mad as hell.

Moonves likes to play the wise guy but he also knows that some are predicting that the 2016 presidential election may cost as much as $5 billion, with much if not most of it going to television. Hard to believe that, as Julie Bykowicz at the Associated Press reported earlier this month, “… Some 62,462 presidential ads have been on broadcast airwaves already this year, according to advertising tracker Kantar Media’s CMAG. The 2016 hopefuls and their related political groups, such as super PACs, have plans to spend $133 million on broadcast TV by the beginning of March, CMAG information shows.”

Is it any wonder local and national TV news is squeamish about taking on real, in-depth coverage of the campaigns that unload endless wheelbarrows of cash on their doorsteps?

This is why, despite the encroachments of cable, satellite and the Internet, local and network broadcast television is still such a money-making machine. At some TV stations, a third of advertising revenue comes from political ads.

So is it any wonder local and national TV news is squeamish about taking on real, in-depth coverage of the campaigns that unload endless wheelbarrows of cash on their doorsteps? That broadcast executives have no qualms about ruining the airwaves and honest discourse while taking glee at the windfalls of profits?

And let’s not forget the ferocity with which television stations and networks have been fighting against campaign finance reform, fearing the death — or at least hobbling — of the golden goose.

At The Intercept earlier this year, Lee Fang wrote:

For nearly two decades, the National Association of Broadcasters, a lobby group for media corporations, has fought bipartisan efforts to provide free airtime to candidates, a reform advocates say would reduce the moneyed barriers to political entry for candidates… In more recent years, media companies have attempted to obstruct FCC rules promulgated during the Obama administration to digitize mandatory forms revealing information about political ad buys. Even that minor reform was too much.

Too much for the likes of Rupert Murdoch’s News Corp, owner of Fox News; and Comcast subsidiary NBCUniversal, parent of NBC News and MSNBC, among others. They and their allies are determined that we, the people, not know who’s paying for the ads that enrich those who have made a swamp of the public airwaves and a mockery of political discourse

The good news is that people are pushing back. As Lee Fang noted, since 2012, broadcast TV stations have been required to place their public inspection files online, including information on all the political advertising they air. But, as Trevor Potter, founder and president of the nonpartisan of the Campaign Legal Center, points out, “The stations are not required to provide the information in a searchable, sortable, downloadable format… As a result, the current database is difficult to navigate and does not permit the aggregation of spending by a particular campaign or outside group.” In other words, private citizens can’t get a good look at totality of the numbers. Legislation that would fix this roadblock to transparency is before the House Energy and Commerce Committee, where unfortunately it probably will be allowed a slow if not merciful death.

It’s not good enough to say the money comes from the XYZ Fund for Swell Americans; we need to know for real who the wealthy individuals and corporate interests are secretly pulling the levers and pushing the buttons of a machine that already is demolishing democracy.

But even if the files become more accessible,  the information still will remain incomplete until we know just who really is behind the money bankrolling the ads, especially the ones funded with anonymous dark money from super PACs and so-called educational non-profits. It’s not good enough to say the money comes from the XYZ Fund for Swell Americans; we need to know for real who the wealthy individuals and corporate interests are secretly pulling the levers and pushing the buttons of a machine that already is demolishing democracy.

“It’s unlawful,” writes former FCC Commissioner Michael Copps, now special adviser to Common Cause’s Media and Democracy Reform Initiative. “There are laws and rules on the books that mandate identification of the real sponsors of ads (both commercial and political) — but they go unimplemented when it comes to the political genre. Failure to enforce the law is corrupting our politics—and goodness knows our politics don’t need any more corrupting!” Tell that to the conservatives on the Supreme Court, Mike, who, like Les Moonves, seem to think the corruption is fun and exciting, which may be why they keep tolerating, even encouraging it.

Petitions have been filed, legislation has been proposed, but really, all the FCC has to do is enforce rules that already exist and do it within 60, 90 or at most 120 days, according to Copps, “giving all parties a chance to weigh in on how best to formulate the sponsorship information and to make sure there is no evasion.”

It’s simple, he says: “Voters have a clear, unambiguous right to know who is trying to influence them. Democracy is about holding power accountable. If we don’t even knowwhom to hold accountable, how do we hope to govern ourselves successfully?”