Sword vs. lightsaber: How the Samurai warrior inspired the Jedi Knights

Stories with lightsabers & Samurai swords always lead to the same end: The climactic fight between Good and Evil 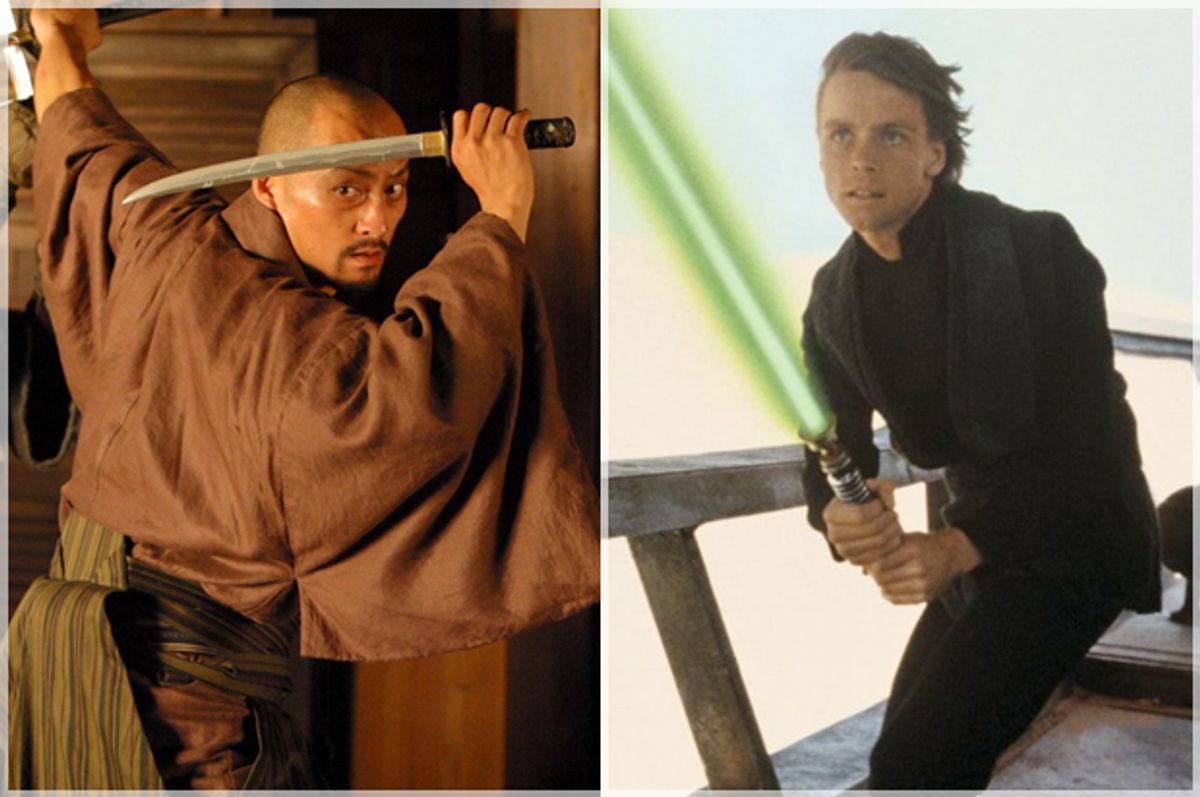 The opening credits of "The Force Awakens," rolling into the infinite distance as usual, remind you that Jedi Knights are down, but not completely out. I had forgotten. In the 30 years since the Empire struck back, much has happened. There’s a new evil empire, a new evil emperor, and an even deadlier death star. But somewhere the Last of the Jedi, Luke Skywalker, is in hiding. Our young heroes of the Resistance must not only defeat Evil, but also find Luke, and re-inspire him.

I had a special reason for going to the first showing of the movie in London. In my book "Samurai: The Last Warrior," I looked at the inspiration behind the look of both the Jedi Knights and their opponent, Darth Vader. So much of it derived from samurai traditions: the cloaks, the tunics, Vader’s helmet, the lightsaber.

Let’s set them side by side:

Long ago in a galaxy far, far away, and also not long ago right here on earth, two warriors prepare for action. The two have much in common. They are expert in the use of swords, despite their ability to call on the most fearsome and destructive of long-distance weapons. One warrior carries a supremely strong yet flexible steel sword known as a katana, which goes through flesh and bone like a kitchen knife through cooked asparagus, yet is flexible enough to deflect similar blades without splintering. The other wields a blade of energy, a lightsaber, which emits an annoying hum and deflects other lightsabers and almost anything else with a crackle, but slices through limbs like a katana when the time is right. Both forgo armor to fight in loose tunics. That is how the Last Samurai, Saigo Takamori, went into battle against the Japanese Empire in 1877; that is how Toshiro Mifune appears in Kurasawa’s film "The Seven Samurai"; that is how young Skywalker, up and coming Jedi, faces up to Vader, the father he has lost to the Dark Side of the Force.

Actually, it’s rather more complicated. Vader, though a master, wears samurai-like armor. Why? There are two reasons. First, in a past "Star Wars" episode, he was dismembered, burned beyond recognition, and restored to life inside a special body-suit, helmet and mask. Second, after Japanese unification in 1600, the samurai became redundant, but instead of vanishing they reinvented themselves as vital members of society, adopting ever more extreme armor designs, with overlapping plates, masks with bristling mustaches and helmets with horns, or crab-like extensions (symbols of protection), or rabbits’ ears to suggest longevity. Vader’s headgear is a simplified version of a samurai face-mask and helmet, with neck protection and ear-flaps. Unlike a samurai, though, he does not need a hole in the top of his helmet through which to poke an elaborate top-knot.

Would the comparison carry over into the latest epic? Yes, indeed, lightsabers, tunics and even a samurai mask for the new Evil One (though he removes it at crucial moments, which made me wonder why he needed it in the first place). Finn (male, black, beautiful) and Rey (female, white, ditto), both Londoners, I’m happy to say, confront their evil antagonist, all with lightsabers in hand.

The climax in both these cases is about two different views of heroism, the heroism of the loser and that of the winners. But there is something that the two sets of heroes share, and it’s not just the similarities in their hardware. Swords and lightsabers are both symbols of status and power. They are the ultimate McGuffins, as Alfred Hitchcock called the filmic "thing that everyone wants."

The samurais’ attitude to swords had a weird logic. The sword had centuries of tradition. It was, at its best, a treasure occupying worlds of magic, spirituality, chemistry, artistry and skill, with its own arcane vocabulary and frequently a name, like King Arthur’s Excalibur. Minamoto Yorimatsa (944-1021), the first of the Minamotos to become famous, had a sword called Dojigiri, "Monster Slayer." It was one of the "Five Best Swords Under Heaven," the others being the Demon, the Quarter Moon, the Rosary and the Great Tenta, all of which survive in museums.

By comparison the lightsaber is somewhat lacking in back-story. Luke’s weapon has magical qualities – it inspires visions when grabbed by the future female Jedi, Rey -- but where is its character? What master made it? Where is its hamon? Where, in the words of a description of a blade by the 14th century smith Masamune, are its "bright varied lines of kinsuji, sunagashi and deep ashi?" No, I don’t know sword-speak either, but the terms hint at the depth of samurai tradition. To samurai, all swords were and are different. By comparison, all lightsabers seem pretty much the same.

Never mind. Stories with swords and lightsabers lead to the same end: the climactic fight that pits Good against Evil, tradition against novelty. They are the ultimate weapons by which great issues are decided.

By Saigo’s time, armies had rifles, cannon, even early machine guns. His final battle on the slopes overlooking Kagoshima in Japan’s far south was like the last scene in "Butch Cassidy and the Sundance Kid," with the odds hopelessly stacked against him, but with no freeze-frame. He knew he was going to die, and in his eyes his death was glorious, struck by bullets and beheaded by his own aide, as the code of seppuku (ritual suicide) dictated.

Finn and Rey are also up against fearsome odds. Their opponent commands a weapon that blasts planets apart, and psychokinetic powers that enable him to freeze his prisoners and suck information from their brains. Yet in the end the struggle between Good and Evil, between First Order and Resistance, with interstellar fates in the balance, comes down to lightsabers and single combat and an enigmatic shot of the reclusive Luke and the triumph of Good in a mighty cataclysm. How Evil survived the apocalypse I have no idea, but I bet there’s a clue amid the explosions. In a year or two, we will all be watching Episode whatever to find out what happens next.

In the telling and retelling of legends, this is exactly how things should be. I forgot about samurais, and loved it on its own terms, and so did the audience, and so will the world.

John Man is a British historian and travel writer with a special interest in Asia. Educated at Oxford and the University of London’s School of Oriental and African Studies, Man has written acclaimed biographies of Genghis Khan, Attila the Hun, and Kublai Khan, as well as "Ninja," a popular account of the legendary Japanese stealth assassins, and "Samurai," a popular history of the legendary elite class of Japanese warrior. In 2007 he was awarded Mongolia's prestigious Friendship Medal. Man lives in England.