After Roe: It's hard to believe now, but the abortion debate wasn't always so toxic. What happened?

Polarization around abortion took a while to develop, and it had more to do with money & politics than ideology 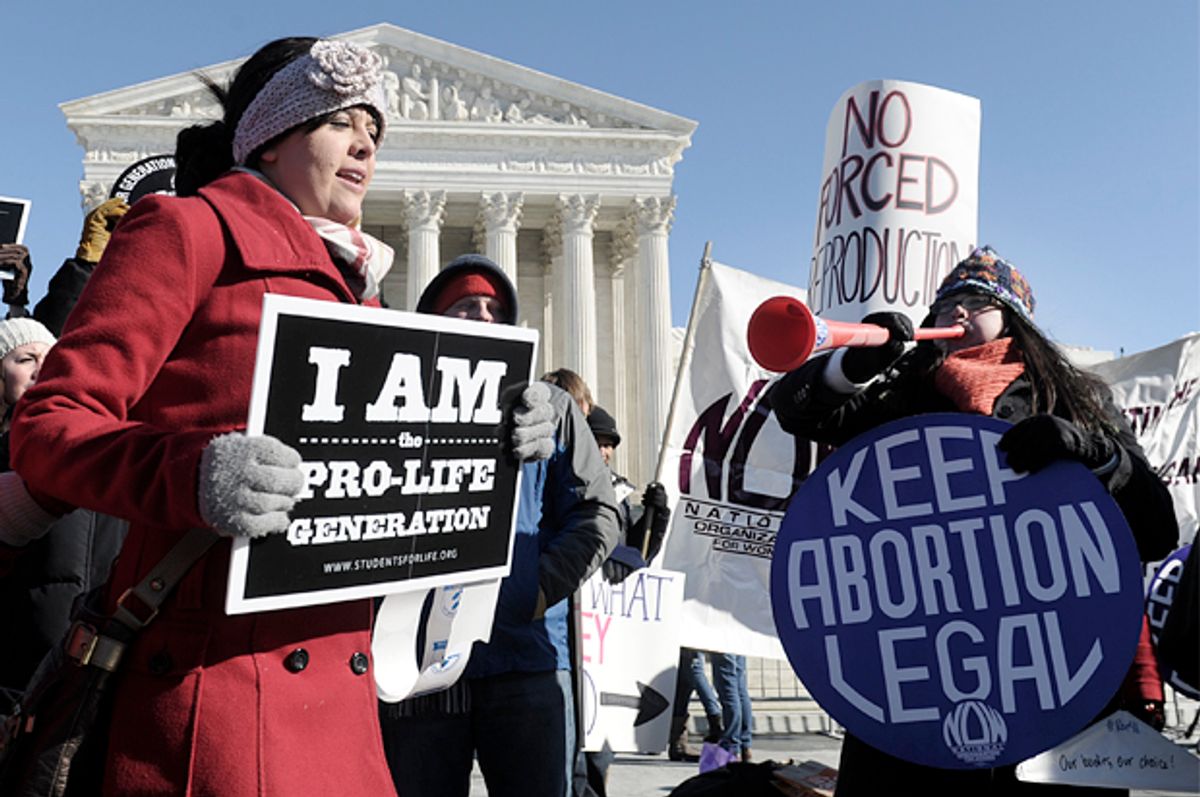 Mary Ziegler teaches law at Florida State University, where she holds the Stearns Weaver Miller chair in the College of Law. Her book, "After Roe: The Lost History of the Abortion Debate," traces the evolution of American political dynamics surrounding abortion. In this conversation with Valerie Tarico she discusses how the debate became so polarized, why some abortion foes will not be satisfied until abortion is criminalized, and how advocates for women and healthy families might find common cause with others.

I see abortion as a social good—like the guardrails right before someone’s life goes off a cliff. As a mom of two daughters, I sure want the rails there. But my dream is for my daughters and all young people to become parents when they feel ready so they can fulfill the promise of their lives and form families of their choosing and stack the odds in favor of their kids.

The intense emotional energy around abortion, both pro and con, makes it really hard to have this broader conversation about chosen lives and flourishing families—about young women and men pursuing their dreams or about healthy, cherished children raised by parents who aren’t stretched to the breaking point. So I desperately want to understand whether there is some way through this impasse.

People would be surprised by how much less toxic gender politics were in the 1970s than they are now. Given how much abortion opponents seem to have fixated on the overruling of Roe, I expected the conflict in the decade after the decision to be particularly bitter, but it wasn’t that way. What it means to be “pro-life” or “pro-choice” isn’t as static as it seems. Some people on both sides were doing surprising and productive things back then to make abortion less necessary. Even today, when we talk about how polarized things are, we’re talking about the movement leadership. But there are people on both sides who can’t join either movement because neither fits what they believe. Many of those active in the 1970s would have been shocked at how dysfunctional things have become at this point.

How did we get to this point—with inflammatory rhetoric inciting violence against abortion providers and a wholesale assault on services that empower women to manage their fertility? We have Congress trying to defund everything Planned Parenthood does except abortion, trying to defund the very services that make abortion less necessary. It’s to the point that I sometimes call Cruz, Huckabee and the others “champions of unplanned parenthood.”

People blame the Roe v. Wade decision, but the broad cultural wars against women weren’t an inevitable result of what the Court decided in 1973. In fact, the polarization took a while to develop, and it had more to do with money and politics than the ideology of people in either movement.

For much of the 1970s, pro-life groups were trying to get politicians to adopt a platform that opposed abortion, but instead both parties tried to appeal to people on either side of the issue. In the 1970s, it was possible to be a conservative Republican and support abortion access. It was possible to be in support of robust anti-discrimination laws for women but oppose abortion. If you look at Biden or Gephardt, for example, there were lots of ways public figures tried to navigate this politically. Ronald Reagan signed an abortion access measure in California. George Bush was at least nominally pro-choice. But in 1976, the Republicans recognized the potential of abortion to mobilize swing votes. By the 1980s, positions crystalized. What happened was a political party realignment.

Abortion opponents wanted Roe v. Wade overturned. For a long time, they had fought for a constitutional amendment that would outlaw all abortions, but that obviously hadn’t worked. By the 1980s, it was pretty clear that the only way they were going to get anywhere was to change the Court, which meant they needed to change presidential elections. Marriage of the pro-life movement and Republican Party was not inevitable and has always been troubled, meaning that there are people in the movement who are naturally conservative and people who are not. Some hold their noses when they vote Republican, hoping for judges and laws that they like.

An “Obamacare simulation” at Washington University dropped the abortion rate to 75 percent below the national average by making top-tier contraceptives available free of charge. Why can’t we at least agree on reducing unwanted pregnancy and making abortion less necessary?

We could have done things to make abortion less necessary. There was a moment in time when that was politically possible. In the 1970s there was a big fight – should we be for the Pregnancy Discrimination Act, the Equal Rights Amendment, or better access to contraception? Some in the pro-life movement made this argument: They were trying to ban abortion, but they recognized that women would still seek it out if they didn’t have alternatives. Politically, they can’t easily make that argument anymore because that would jeopardize the Republicans’ ability to stack the Supreme Court. But some people still feel that way. All Our Lives is one group that supports services and choices, except for abortion.

OK, so instead of Obamacare, let’s just talk about improvements in contraceptive technologies. In Washington state, the annual number of abortions has dropped from around 30,000 to around 18,000 without any increase in restrictions or decrease in access. The primary factor seems to be increased use of IUDs and contraceptive implants -- also, Plan B (aka “the morning after pill”). And science suggests that all of the long-acting contraceptives and emergency contraceptives operate by preventing conception itself,  rather than by booting out an embryo. Why aren’t pro-lifers lobbying loudly on behalf of better birth control?

The idea of IUDs as abortifacient is like an article of faith — not something people are willing to rethink. Also, a meaningful group in the pro-life movement is actually anti-contraception as well as antiabortion. For the most part this is not overt, because it’s not politically expedient. Those in power in the movement today are more likely to be conservative on every issue. Some are anti-sex unless it’s procreative. This strand was there from the beginning, but it just wasn’t universal. Now, a lot of the power players are people who operate naturally within the worldview of the Republican Party.

But they don’t represent the whole movement.

You keep saying that not everyone who opposes abortion is socially conservative to an extreme.

The pro-life movement is big and messy and divided. That’s likely to be true of any social movement, and there is no exception here. Starting in the 1970s and running through 2010, sociologists have studied those who were active in the antiabortion movement. A few patterns emerge from these studies. The movement was disproportionately Catholic and female in its early years, but that’s much less true now. Still, Catholics are disproportionately represented, and movement members more likely to be white, married and college-educated than the population as a whole.

Ziad Munson’s 2010 research found that antiabortion activists often identify as Republicans, but their worldview maps pretty poorly onto the standard conservative platform. More of them were opposed to the death penalty than you would expect, for example.

As a historian, I try to get at what people thought was motivating them. Whether or not individual objections to abortion harken back to religious influences, activists believe they have secular moral reasons. Some express ethical objections. Some people see the fetus at any moment in time as a child. Some people are just grossed out by abortion—motivated by disgust. Often they are people who found images of abortion disturbing without thinking through how the images had been edited. Not all of them are driven by opposition to female equality or sex or birth control.

So is there any room for common ground here? Right now we’re stuck with terrifying rhetoric from politicians and constant threats against abortion providers that erupt into unpredictable violence. In some places, the only providers are people like Willie Parker or Warren Hern, who are so committed to abortion care as a calling that they are willing to risk their lives.

As clinics close, poor women who can’t afford to travel are being forced to bear children they don’t want and can’t afford. Last summer I wrote a piece titled “Why I’m Pro-Abortion not Just Pro-Choice” and it went viral. Amelia Bonow’s spontaneous hashtag #ShoutYourAbortion erupted into an international Twitter storm. In other words, as the right ramps up, people on the left are ramping up too. Based on the past, what would you say about how we might get beyond the current impasse?

The common ground would lie in reducing the need for abortion, and in promoting the wellbeing of women and families. You would find some people in the movement that you can talk to and some that you can’t. In 2015, the Supreme Court decided a case about whether federal civil rights law ever requires employers to accommodate women who need work modifications during pregnancy. The case involved Peggy Young, a woman who worked at United Parcel Service and sought the same accommodations the company already provided for people injured on the job. We associate the fight against pregnancy discrimination with feminists, but below the radar pro-life groups submitted amicus briefs arguing for more accommodations when Young’s case went before the Supreme Court. The Republican Party is generally against anti-discrimination protections, so if you want to prevent or reduce abortion that way, but are aligned with the party, your political allies would say that’s inappropriate. Even so, there is still some willingness to push for those things.

The interest in women’s health, some of that is sincere. Some of the people using that argument would actually like to give women access to sex education or neonatal care. Also, there are antiabortion groups trying to lobby for equal pay because people recognize that sometimes a woman feels like she can’t afford another child. Paid family leave might be another issue. If you are pro-life, you don’t want people to feel coerced to have an abortion. Many in the movement recognize that poor women don’t really have a choice to raise a child and often feel financial pressure to have an abortion. There might be common ground there.

It seems like our insanity about abortion is making it impossible even to have sane conversations about family planning regarding how well-timed childbearing helps families to flourish. Even that conversation has become toxic. Any advice here?

There are no easy answers because differences on the abortion issue are real, profound and unchanging. I don’t think there was common ground on abortion even before Roe. But a good starting point is to remember that not everyone who identifies as antiabortion is the same. The polarization of abortion politics doesn’t capture what most Americans actually think, even those who oppose safe, legal abortion. When you start to recognize the diversity in the movement, fault lines appear, and you can at least begin a real conversation about how to make things better for parents and their kids.