How to break the GOP governors' destructive Obamacare resistance 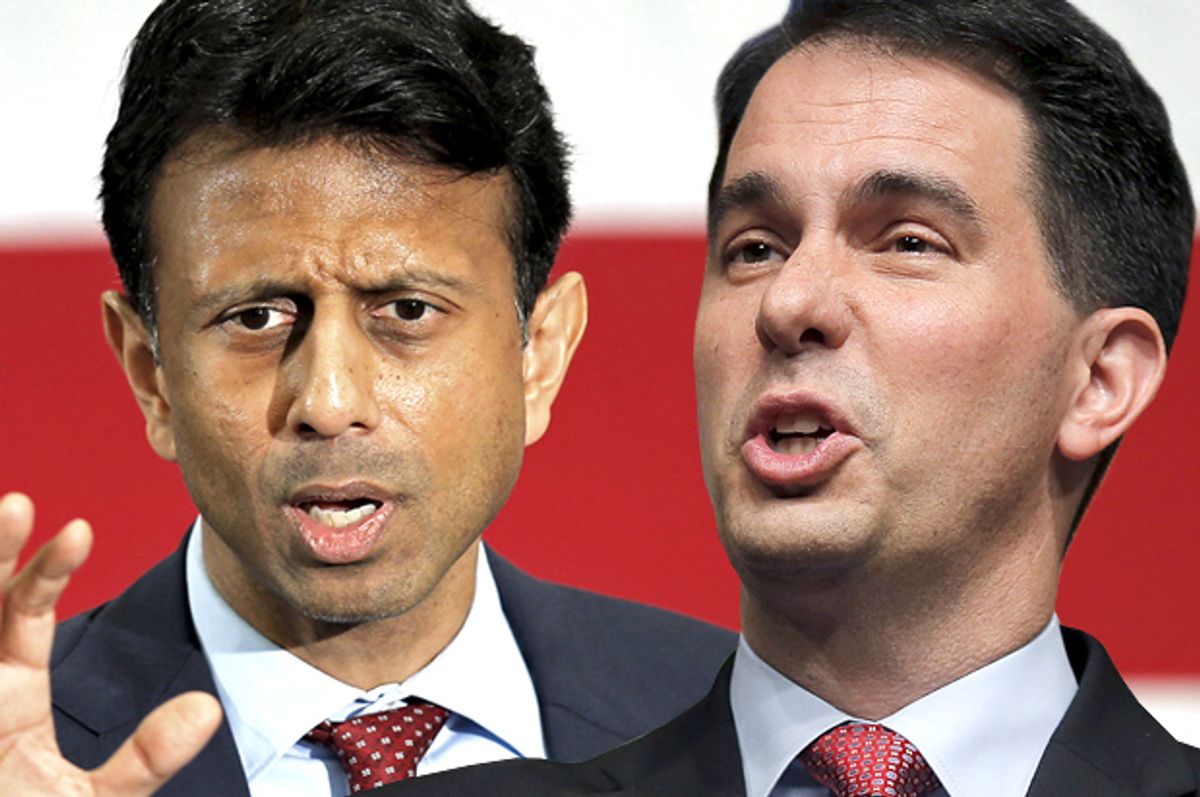 One of the most important public policy battles in America today is the Medicaid-expansion provision of the Affordable Care Act, which 20 states still refuse to exercise. As Carter Price, a mathematician at the RAND corporation tells Salon, “The states that are not expanding Medicaid are foregoing billions of dollars in federal spending and tens of thousands of jobs.”

A new working paper by political scientist Patrick Flavin finds that, "subjective well-being increased among low income citizens in states that expanded Medicaid eligibility compared to states that did not." So, what determines whether a state expands Medicaid? A new study adds a twist to this important literature: they find that lobbying has a strong influence on whether a state expands Medicaid.

In a forthcoming paper in the American Journal of Public Health, political scientists Timothy Callaghan and Lawrence Jacobs find that while partisan control of government explains much of the variation in Medicaid adoption, it can’t explain all of it. Instead, they find, “reformers can take concrete steps to widen the reach of Medicaid expansion in states with Republicans in power. Well-organized public interest groups have succeeded in states where they deploy lobbyists.” Their model finds that when the number of of public interest lobbyists increases as a share of the state population, states are more likely to move closer towards fully expanding Medicaid. This effect remains even after extensive controls:

"Even amidst the potentially confounding effects of partisan polarization, economic affluence, the inertial dynamics within states, and the well-funded pressure from businesses and professionals, lobbyists for public interest groups still wielded influence."

The problem is that such lobbyists are often overpowered: On average business and professional lobbyists outnumber public interest lobbyists four-fold. While there were 7,300 lobbyists working for business or professional health organizations, there were only 1,675 who worked for health advocacy organizations and 226 for unions in the health sector. But the important lesson is that when progressives mobilized, they can have impact. It’s an important lesson from a rather dispiriting literature.

Earlier this year I reviewed the research and showed that the core factor driving Medicaid expansion was not economics, but rather politics. And, while the work of other scholars, like Alexander Hertel-Fernandez, Theda Skocpol and Daniel Lynch focused on divides within the business community, Callaghan and Jacobs show that it’s also important to focus on activism. Another factor at work is the donor class. As I noted in a discussion of the work of Michael Barber, a political scientist at Brigham Young University, GOP donors are far more opposed to the Affordable Care Act than non-donors: New data provided to Salon by political scientist Martin Gilens from the 2012 Cooperative Congressional Election Study, which has a relatively large sample of high-income individuals suggest that high-income Americans are the most likely to support repealing the ACA. This sample is unique in that it has a large enough sample of individuals earning over $500,000 (118) to get an idea of what the superwealthy think about healthcare. As the chart below shows, while Americans on the whole are opposed to repealing the ACA (44% support repeal, compared with 56% opposed), the only time support reaches 50% is in the highest income bracket. Among those earning less than $30,000, 40% supported repealing the Affordable Care Act, among those earning more than $350,000, 47% did. According to data from 2014 Cooperative Congressional Election Study, provided to Salon by political scientist Brian Schaffner, 62% of non-donor Republicans said they would refuse the Medicaid expansion, compared with 77% of donors who gave more than $1,000.

The data from Gilens and Schaffner line up with the work of political scientists Benjamin Page, Larry Bartels and Jason Seawright, who document huge gaps in opinions about healthcare between the wealthy and average Americans. While 61% of the general public support “national health insurance, which would be financed by tax money,” only 32% of the wealthy people in their survey did. While, 59% of the general public say they would be “willing to pay more taxes in order to provide health coverage for everyone,” only 41% of the wealthy agree. The problem, however, is that Gilens and Page also find that, “economic elites and organized groups representing business interests have substantial independent impacts on U.S. government policy, while average citizens and mass-based interest groups have little or no independent influence.”

This research helps explain earlier studies suggesting that public opinion does affect whether a state expands Medicaid, but a fully 17 states are not congruent with majority will. While the Medicaid expansion is popular, it is not inevitable. The power of the wealthy, the business lobby and the donor class likely hampered the Medicaid expansion. However, when public interest groups are mobilized, they are often able to successfully press for progressive change. It’s all the more worrying then that conservatives are far more successful at shaping the agenda at the state level and appear unwilling to dedicate significant resources to the Medicaid expansion. Progressives can beat the donor class, but they have to try.