"Star Wars" got us ready for Reagan: "You suddenly have permission to think in very juvenile terms about how history works"

Salon talks to historian Rick Perlstein about the period when the U.S. went from reflective to shallowly triumphant 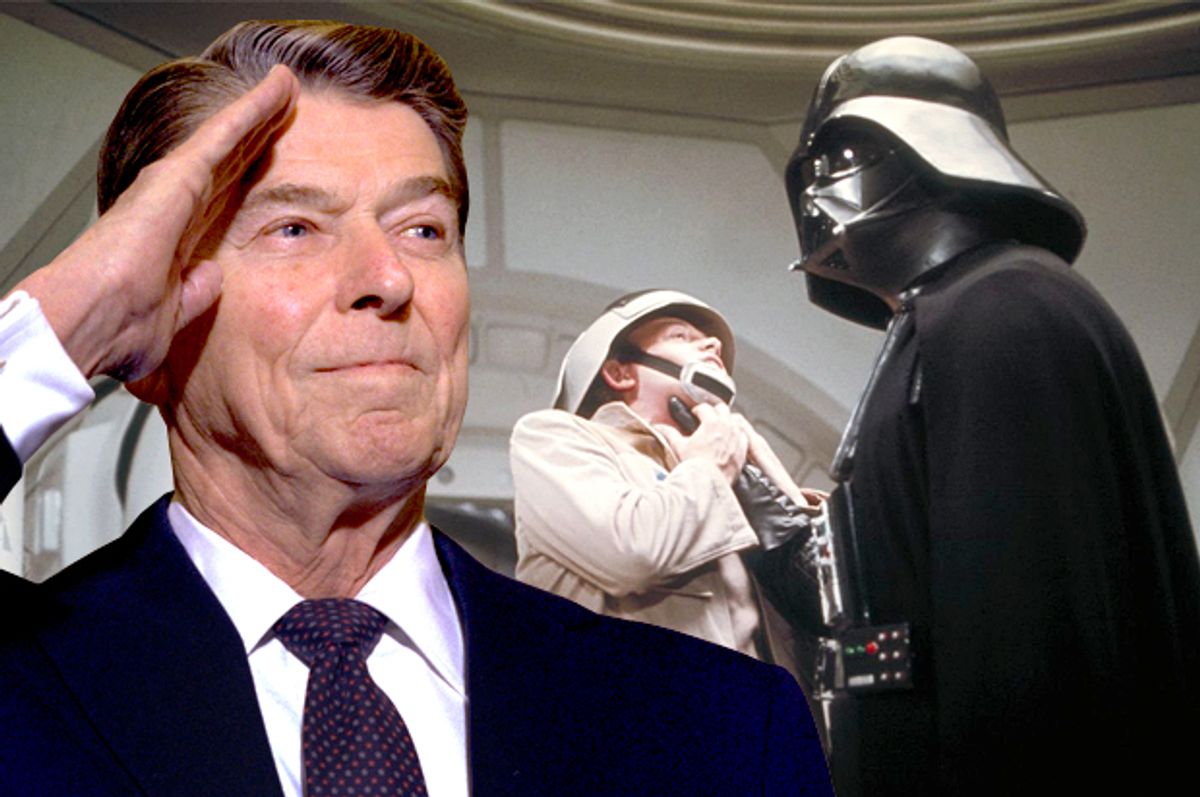 “Star Wars: The Force Reawakens” broke all kinds of records over the weekend and has been called a return to the style of the original 1977 film. It will soon swallow everything in the known universe.

Historian Rick Perlstein finds himself interested in the movie, but he’s not an action-figure collector. What intrigues him is way the “Star Wars” movies have become the dominant pop culture of the last few decades. “I was about to turn eight years old when it came out,” he wrote recently of the original film, “and I loved it as much as the next second grader did. Because ... I was a second grader. Looking back at the summer of 1977 now, however, wearing my historian’s cap, I have to protest: why are we celebrating this ‘franchise’ in the worshipful way we are, when it contributed so materially to turning us into a nation of eight-year-olds?”

Perlstein, the author of “The Invisible Bridge: The Fall of Nixon and the Rise of Reagan,” just published an insightful piece in the Washington Spectator called “Juvenilia Strikes Back.” He argues that “Star Wars” didn’t just help end the New Hollywood boom that included artful, grown-up films like “Taxi Driver,” “The Godfather” and “One Flew Over the Cuckoo’s Nest” – a claim that’s become part of the accepted wisdom -- but that it helped prepare the nation for the Reagan revolution. At the very least, the movie and its sequels came at a time when the nation was moving through the traumas of the ‘60s and ‘70s – with moments of introspection and self-criticism – to the unreflective triumphalism of the ‘80s.

We asked Perlstein, who lives in Chicago, to put the movie in historical context for us: Most centrally, what was the connection between the success of “Star Wars” and the other tensions in American life at the time? The interview has been lightly edited for clarity.

Let’s go back to 1977, when the original “Star Wars” movie came out. What was going on in the country at that point, and what was on its collective mind? It was a transitional period in some ways. What were we thinking about, worried about?

It was a transitional period, aesthetically, for Hollywood. But it was also a transition period politically. This was that hazy, after Watergate, after Vietnam, after the energy crisis, the beginning of the collapse of the post-World War II American economic boom … Most salient was Vietnam: It was precisely two years earlier that Saigon had fallen, the most profound humiliation America had ever suffered. We’d spend billions of dollars in South Vietnam, devoted 58,000 lives, to saving this country from Communism, and then in an instant it collapses like a house of cards. It unfolded live on TV. It confirmed what a lot of Americans were saying all along – that the war was this cruel hoax ... That South Vietnam was a colony of America.

When the original “Star Wars” landed, how did it change Hollywood?

So many things made “Star Wars” different as a film, and different from the quote-unquote important films that had come before it. Even something as unexpected as the score – you just didn’t have big bombastic scores playing in movies like “The French Connection” or “Bound for Glory.” Suddenly you have this mass of violins basically telling you what to feel …

Not a lot of nuance in the score, or the movie itself …

Also, aesthetically, it really was a pastiche of all these old Hollywood forms – sword and sandal epics with Princess Leia’s costumes and the great desert expanses, Errol Flynn swordfighting, with light sabers ... cliffhangers … “Casablanca” with the morally reticent hero who finally realizes his heroism in the last reel … “The African Queen” in the broken-down ship, the “Millennium Falcon.”

You have a film in which almost every second on the screen is borrowed from Old Hollywood. Which was a real sharp break from what a young, hot director was supposed to do. George Lucas was part of this crowd of Francis Ford Coppola and Martin Scorsese … His wife was Scorsese’s film editor.

In the Washington Spectator piece you write, “He gave us permission to stop growing up.” You’re talking about Lucas there. But you’re also talking about Reagan.

The politicians were much like the filmmakers – they were beginning to engage us with this grown-up moral complexity. Frank Church runs for president in 1976 – he’s most famous for running this hard-hitting congressional investigation of the CIA and the FBI … He found G-men – the heroes of Hollywood – spying on Martin Luther King. You have politicians looking at the idea of us as the world’s policeman after Vietnam. Watergate inspires not just a mature and elevated discussion of civics, it finds its way to Hollywood with “All the President’s Men,” in which you have a new kind of movie hero, with the investigative reporter.

And Ronald Reagan is beginning his political comeback, after losing the presidential nomination race in 1976. In 1980, at a convention of Veterans of Foreign Wars, he said Vietnam was a “noble cause.” What was shocking about that was that no one was saying that. Vietnam was a national shame.

How "Star Wars" fits into this: The United States, in Vietnam, was behaving exactly like the empire – with massive fire power. And the enemy really resembled what’s known in the film as the rebellion: In the 1983 movie “Return of the Jedi,” the Ewoks use bamboo as a weapon – so did the Viet Cong. The North Vietnamese had this citizen brigade that was shooting down planes with rifles … This ragtag, rebel alliance. The morality was not simple, because they were backed by an empire, too – the Soviet empire. So it was a mess.

But “Star Wars” differed from those earlier ‘70s movies in its lack of moral ambiguity, right?

Well, and what happens in “Star Wars” is the moral polarities are reversed: You really are identifying, as it were, with the Viet Cong. Lucas came from this New Hollywood, vaguely left-wing aesthetic; he talked about Darth Vader as a Nixon figure, for example. And he said it was kind of subversive for Americans to identify with the Viet Cong figures in the movie.

But that’s not what happened in 1977 or in the sequels. What you have politically and aesthetically, America identifying with the rebels as if we were the underdog. At the level of the political unconscious, this was the shift – this was the juvenalization of our politics. The idea that the morality of a children’s movie could [summon] so much cultural energy. That’s what you get now, with all these learned disquisitions on “Star Wars,” people talking about the expanded universe … About what caused the empire to reassemble after the Battle of Endor … You suddenly have permission to think in very juvenile terms about how history works.

Having seen the movie last night: It’s really cute, it’s really charming, it’s really funny … But it’s also just really cartoonish. When I see people running around analyzing it as if it’s Shakespeare, it makes me wonder what’s going on. And it doesn’t make me very comfortable.

Part of your argument, I think, is that "Star Wars" helped infantilize the culture and get us ready for Reagan. Is that fair to say?

I think that is fair to say. Reagan might even say it. Reagan had no objective to his strategic defense initiative to being called Star Wars. He had no objection to associating himself with a movie like “Rambo.”

In TV you had Fred Silverman – with “Three’s Company” and “The Love Boat” and jiggle TV – usurp Norman Lear, who was starting to bring some of these social conflicts of the ‘60s and ‘70s to the screen.

You had Roone Arledge, from ABC sports, taking over the new division of ABC. You had “Nightline,” where the nightly recap of the hostage [Iran] crisis turned it into this soppy, moralistic soap opera about the reunion of families when it’s really this geo-strategic situation with a history that almost gets erased.

All these things come together -- it’s a bridge from the moral seriousness of the ‘60s and ‘70s to the infantilized politics of the ‘80s and Reagan.

So "Star Wars" didn’t cause all of this, but it was part of a moment where we went from soul-searching to a simplistic worldview.

Yeah … Causality in history is never that simple. But it certain was an important transition moment.