The year in bad celebrity advice: "Gwyneth had a really big year in 2015. She really just kept up the bunk" 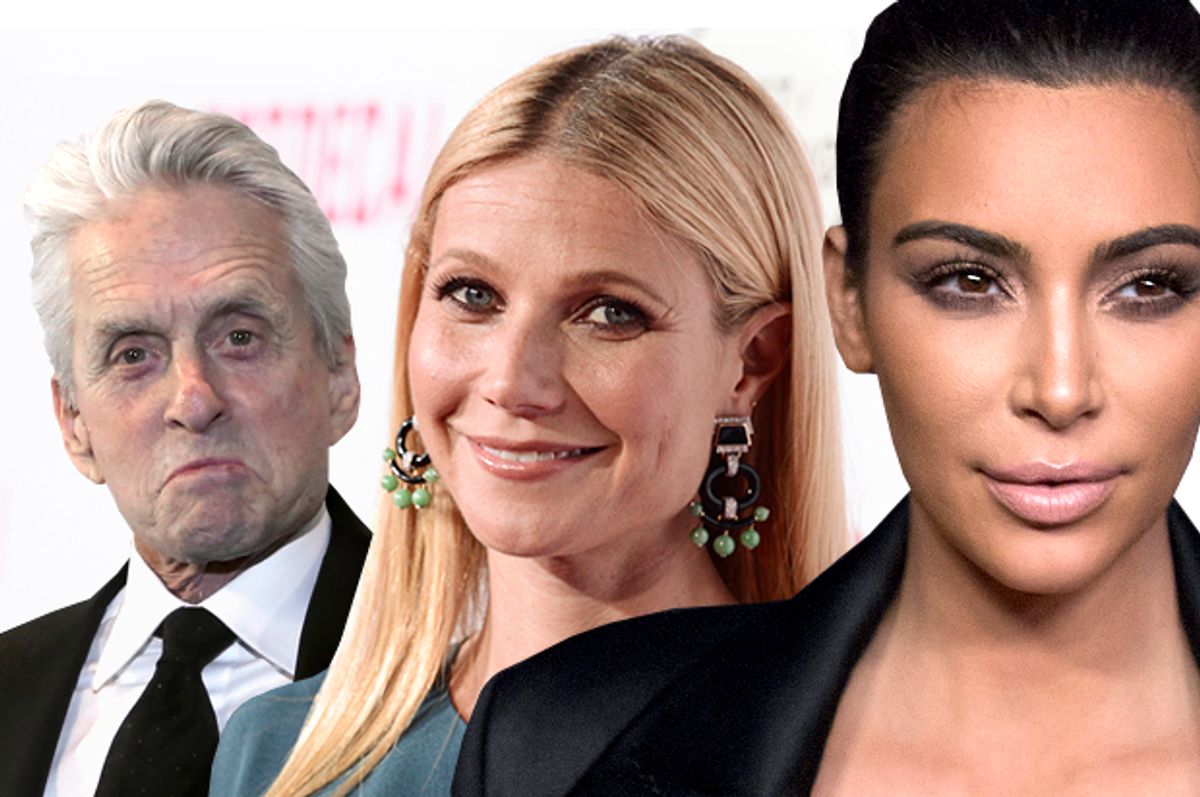 If 2014 was the year celebrities spread the myth that vaccines caused autism, 2015 may go down as the year of the steamed vagina, thanks to Gwyneth Paltrow’s suggestion on her GOOP website. This was hardly the only unexpected piece of advice a celebrity offered us this year: As celebrity itself looms larger, so does the phenomenon in which the rest of us are told what to eat and drink and how to be healthy and happy. Will it ever stop?

Timothy Caulfield, a professor of health law and researcher of science policy, harbors an unhealthy obsession with celebrity advice: It’s a central subject of his book “Is Gwyneth Paltrow Wrong About Everything?: How the Famous Sell Us Elixirs of Health, Beauty & Happiness.” The book looks at various celebrity claims and holds them up to scientific evidence and then asks about the larger effect of celebrity cluture.

We spoke to Caulfield from Edmonton, Canada, where he teaches at the University of Alberta. The interview has been lightly edited for clarity.

Gwyneth Paltrow had a big year in 2015 telling other people how to live, didn’t she?

Gwyneth had a really big year in 2015. She really just kept up the bunk. She had advice about if you have a flu, go into an infrared sauna. She consistently made recommendations about colon cleanses. One of her worst recommendations was that idea that wearing a tight bra is linked to getting breast cancer – which is both incorrect and a bit of fear-mongering.

But the bunk just kept coming. It’s fun and it’s silly — but it’s also a little bit dangerous, too, and a little bit unhealthy. She’s an example of how bad advice can cause harm.

Let’s talk about that a bit. Which of her advice is not just wrong but genuinely dangerous?

The colonics are a case where you can really do physical harm — you disrupt the natural fauna of your colon, and perforation is a small chance but a real chance. And also I don’t like the more subtle harm that comes with all this celebrity advice: It distracts us from the simple things we can do to live a healthy lifestyle. It creates this kind of wellness noise that’s problematic in the long term.

Did the steam-cleaned vagina advice catch on?

I love that suggestion on so many levels. It’s completely absurd. But I also don’t think it’s a case where a lot of women ran out and steamed their vagina as a result of [her advice] … I think it’s an example of this absurd information coming from someone that’s so clearly wrong, but that person still retains influence.

Gwyneth is a brand, so people are not buying into the specific advice, but the larger gestalt. Maybe they’re not steaming their vaginas, but they’re running out and buying the organic kale that she recommends.

Who were some of the other main offenders in 2015?

There were so many. We had Shailene Woodley, who’s on the rise in the bunk universe. She’s like an up-and-coming Gwyneth: She loves the pseudoscience. She doesn’t have a lifestyle brand yet, but I wouldn’t be surprised if it’s around the corner.

She’s really into supplements, really into superfoods for which there’s no evidence for support. She also gives concrete advice: My favorite is that you’re supposed to eat clay in the morning — it’s supposed to have this detoxifying effect. It’s complete bunk.

They say these things so earnestly — I think they really believe them.

Michael Douglas is another example. There are so many gluten-free [celebrities] out there. He was pontificating on the benefits of gluten-free — that it’s why he’s feeling better. There’s no evidence to support that at all.

So you have some people who are genuinely vulnerable to gluten and a lot of celebrity poseurs?

The gluten thing is an interesting story. There are people who [have celiac disease] — that’s a clear, diagnosable ailment ... But there’s no evidence that going gluten-free will make [other people] healthier … It’s not a healthy diet — it’s a diet you go on because you have some kind of clear sensitivity.

Jenny McCarthy spoke quite noisily about the supposed relationship between vaccinations and autism in 2014. What was her line in 2015, after the claims were disproven?

She continued with the bunk. She made inappropriate comments about the HIV status of Charlie Sheen – implying that he was so infectious that he should have disclosed his status. Again, no evidence to support that kind of idea. Her ex-husband also spewed some anti-vaccination nonsense.

If you asked the average person on the street, I don’t think they’d ever say that McCarthy was a credible source of information. But [celebrities] say this stuff, and it keeps the myth alive, it keeps the myth circulating. It feeds on that availability bias we all have.

What motivates all the celebrity pontification? Aren’t these busy people who have other things to do besides telling the rest of us how to behave?

And is this advice-giving historically recent? Were celebrities in the ‘20s and ‘30s giving us advice, as well?

Celebrities have always influenced us; there’s no doubt about that. They’ve influenced our behavior around smoking, around drinking. One of the famous myths is that Coco Chanel invented tanning — which is one of the worst things you can do for your skin.

But the idea that they’d provide advice is relatively recent — from the last couple decades. You saw celebrities selling products, like Suzanne Somers. Now it’s in full flight. I think a lot of it is celebrities trying to increase their brand, their celebrity footprint. Gwyneth is a good example of that; Jessica Alba is an example of that. And they’re using this lifestyle advice to do that.

I also think Gwyneth probably believes it. There might be some profound cognitive dissonance, but I think she believes it.

A lot of these celebrities are under a lot of pressure to look good. They’re willing to try anything. And they’re talking about the strategies they’ve used.

Is there a final piece of 2015 celebrity advice we’ve not talked about yet?

There’s Kim Kardashian’s very recent advice about eating your placenta. There’s no evidence to support that at all. That it’s nutritious … You can hire people to put it into pill form so you can eat it that way. It’s just ridiculous.

And all the extreme diets out there — they’re horrible, in that they distract us from reality.

The other thing celebrity culture does is it forces us to think about appearance goals instead of health goals ... It shifts our motivation.

It’s been a year full of bad celebrity advice, and I imagine 2016 will be as well. Will celebrities get tired of telling us what to do? Will we get tired of hearing from them?

It doesn’t seem to be slowing down. But I hold out hope for 2016. Because there seems to be more people criticizing celebrities, from Dr. Oz to Gwyneth. Look how people responded to the vagina steam. I’m hopeful that we’ll have a science-informed counterbalance to the celebrity noise. But I can almost guarantee there will be a new celebrity health trend in 2016. I can almost guarantee it won’t work, and I can be pretty sure it will still be popular.