They're loo-ny tunes! Sexist attacks on Clinton get weird as conservatives obsess about her bathroom time

Hillary Clinton takes longer to use bathroom than her male colleagues. For some reason, conservatives are obsessed 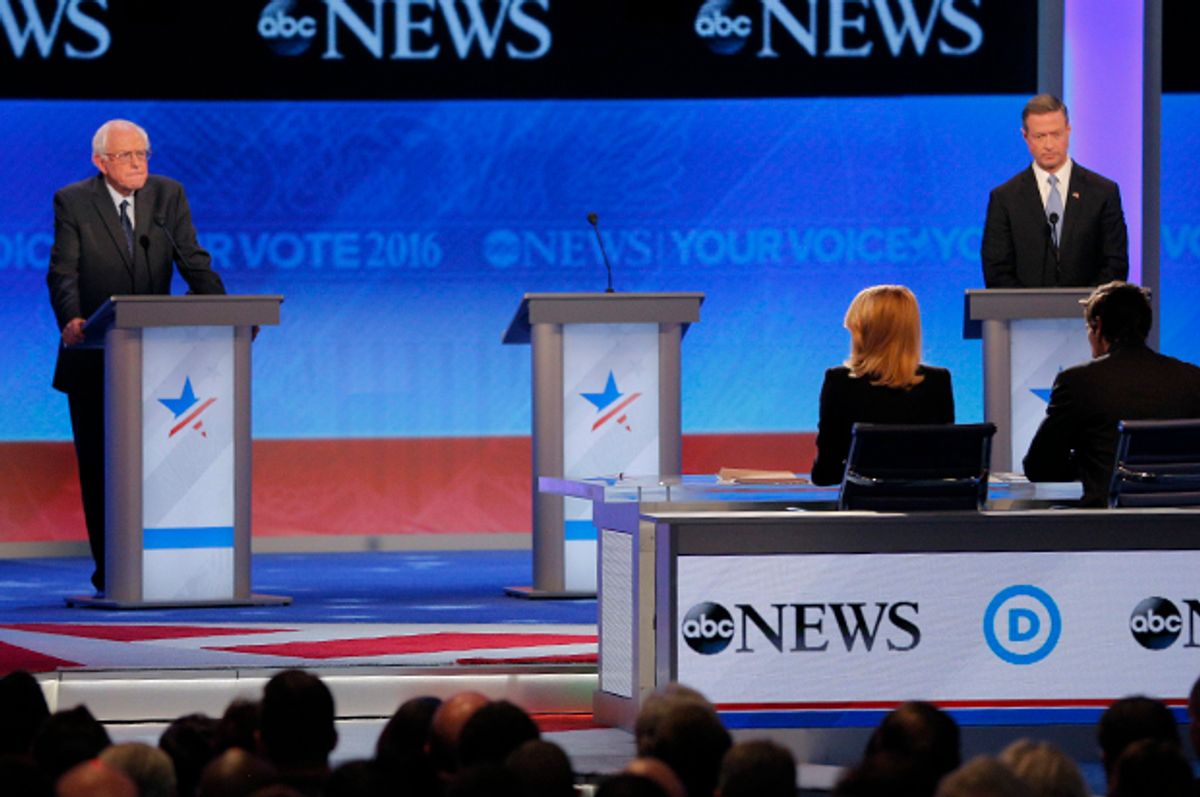 Folks, I hate to break it to you, but Hillary Clinton is a woman. This was clearly a major cause for concern during Saturday night's debate when Martha Raddatz rather unsubtly suggested that Clinton would be emasculating her husband by relegating him to a role that traditionally requires the presidential spouse to "supervise the menus, the flowers, the holiday ornaments, and White House decor." But now conservatives are falling all over themselves to make a big, honking deal out of the fact that Clinton took a longer bathroom break during the debate than her male colleagues did.

As Scott Eric Kaufman wrote earlier, Fox News covered Clinton's speediness in urination as if it was literally the most important part of a debate that actually covered important topics, like foreign policy and health care reform. But their approach was positively mild compared to what other conservative news outlets decided to do with the fact that Clinton was briefly absent from her podium due to a slightly over-long bathroom break. The Daily Caller had a field day:

When it was reported that one of the factors holding her up was that there was already someone in the bathroom, there was a rush by conservative media to accuse Clinton of cattiness, such as this headline at Breitbart:

The Daily Mail took it a step further, noting that the woman she allegedly wouldn't share the bathroom with, a deputy campaign manager for Martin O'Malley named Lis Smith, dates Eliot Spitzer, the former New York governor who resigned after he was outed for his expensive prostitution habit. The implication is pretty obvious, that Clinton is some jealous old biddy who is sitting in judgment of Smith for dating such a cad, an implication that makes no sense when you consider that Clinton's direct aide that night, Huma Abedin, is married to Anthony Weiner.

There's a million likely reasons Clinton can only use an empty bathroom, starting with the fact that Secret Service probably doesn't want to follow her in there. But she's a lady, so the right-wing media has to imply that she's got some irrational lady reasons for her behavior.

It was just a matter of time before conservative media started to imply openly that Clinton isn't qualified to be president because of what's between her legs, though I must admit it didn't seem that it was her urinary tract they would start obsessing over. But hey, she's post-menopausal, so they've got to go with what they can work with. As any hack comedian can tell you, ladies take longer in the bathroom. So it really does work nicely as a way to take a sexist swipe at her while maintaining a very, very thin veneer of plausible deniability.

Or, at least in most cases. For the many conservatives who struggle to understand even the most conspicuous kinds of subtext, there are those pundits who will gladly spell it out for you. Elizabeth Harrington, a writer for the conservative Free Beacon website, helped the slower witted members of the right wing audience on this front:

And there's always those conservative women who, eagerly lapping up male approval, will poo-poo the idea that women have legitimate reasons for things like taking 30 extra seconds in the loo.

Oh, please. Hillary don't use the "it takes me longer to go to the bathroom" line again.

If you want equality, feminists, you have to suppress those biological needs! Next you'll be telling me that women are entitled to full pay, even though they keep stubbornly menstruating.

The funny thing is that Clinton was actually trying to be quick about it, even though it really is hard for women — with the sitting down and the complicated clothing issues — to get it done faster than men. She had Abedin timing the bathroom breaks for her. It was just that Abedin showed O'Malley's campaign staffer a small mercy in letting her into the bathroom first that slowed things down. Add to it that Clinton had a longer sprint to the bathroom (and the expectation that she sprints in heels). Truly, she did a pretty bang-up job getting through nature's call with efficiency.

Even if she did just need to take longer to pee, so what? Having to take a lengthy stint on the pot in no way hurts your ability to perform as a leader. Ask LBJ, who was such a notorious bully that he would literally take meetings in the bathroom, forcing his underlings to try to act professional while he sat in front of them, pants down and popping a squat on the toilet. Now that's someone who is being unreasonable about their bathroom demands.