This is how you change your country: Grassroots leftist party Podemos wins seats in Spain, wiping out two-party rule 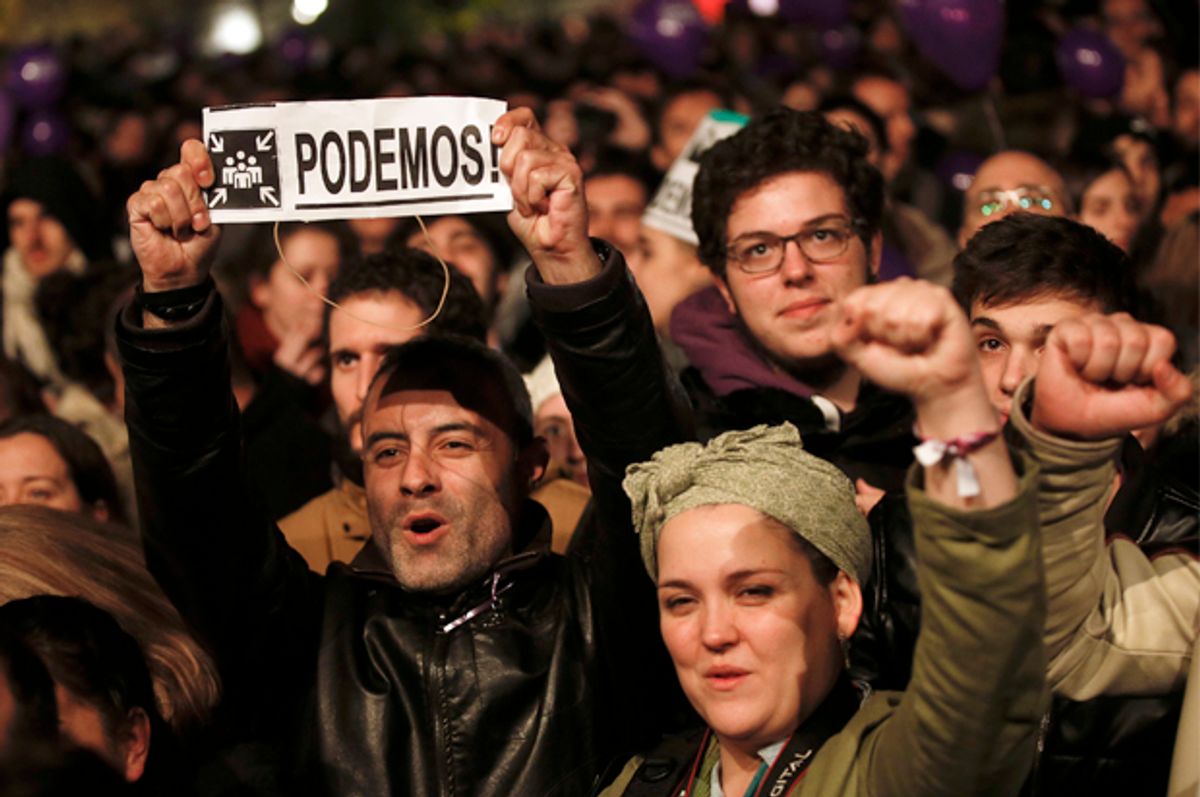 Imagine the Occupy movement in the U.S. created an independent leftist party. Imagine then that, in just three weeks, it became the country's third-largest party — and, in a matter of months, the second-largest.

This is exactly what happened in Spain. Podemos, Spain's new grassroots left-wing party, emerged out of the Indignados movement (also known as the 15-M movement), the Spanish equivalent of Occupy Wall Street. The party's anti-austerity, democratic socialist platform was immediately popular, and spread like wildfire.

The right-wing ruling People's Party (PP) came out on top, with 29 percent of the vote. The center-left Socialist Party (PSOE) followed in second, with 22 percent. And trailing just behind PSOE was Podemos, with 21 percent.

"Today is an historical day for Spain. We are very happy for the fact that in Spain the two-party system is ended, and we are happy because we are starting a new political era in our country," remarked Podemos leader Pablo Iglesias Turrión in an address after the election.

Spain has only been a democracy since the 1980s. Before then, it was ruled by fascist dictator Francisco Franco, who was a western anti-communist ally in the Cold War. Since Spain became a democracy in 1981-82, the country has been alternatively ruled by either PSOE or the PP, which can roughly be seen as Spain's Democratic and Republican parties, respectively (although both are significantly to the left of the hegemonic U.S. parties).

Podemos has effectively challenged this two-party system for the first time in Spanish history.

The front page of El Mundo this morning read "Spain buries bipartisanism and leaves the government up in the air."

"Our defense of the social justice and our fight against corruption are going to be the political lines of our group in the Spanish Congress," Pablo Iglesias added in his public remarks. "Spain is not going to be the same anymore."

Iglesias is a charismatic and relatively young politician who worked as a journalist and professor of political science before turning to politics. As a youth activist, he was involved in the Communist Youth Union of Spain and Latin American solidarity movements. Although incredibly well-versed in political theory and history, he has made it a priority for Podemos' message to be accessible and has striven to make the party as democratic as possible.

Because of its grassroots, direct-democratic form of organization, many analysts have characterized Podemos as not just a party, but rather as something much more, as a political movement in and of itself.

Conservative ruling Prime Minister Mariano Rajoy may lose his seat, given the divided parliament. The PP previously had 185 seats in Spain's Congress of Deputies. It needed 176 to form a majority, yet earned just 123.

Even though Podemos got just around 340,000 less votes than PSOE, the latter won 90 seats, while the former won 69. Spanish newspaper El País created the following graphs, illustrating the composition of the new government.

Although socialist in name, PSOE is thoroughly capitalist in action. The party, which governed from 2004 to 2011, implemented neoliberal policies, cutting social spending. After the financial crisis of 2007 and 2008, PSOE accepted harsh austerity measures. Podemos' popularity is largely due to its firmly anti-austerity positions and its direct democratic modus operandi.

The crisis has hit Spain particularly hard. Spain has the second-highest unemployment rate in the E.U., behind Greece, which has hovered around close to one-quarter of the population for years. Poverty rates have also skyrocketed.

The leftist populist message of the party (Podemos means "we can" in Spanish) has offered an alternative to a population that is thoroughly tired with the corrupt political duopoly and the austerity policies both PSOE and the PP refused to challenge. In less than two years, Podemos has not just challenged the legitimacy of PSOE -- Spain's second-oldest party -- it is in the process of defeating it.

PSOE and the PP lost 5.4 million votes in this election, out of a total population of 48 million.

Voter turnout was 73 percent -- almost three-fourths of the eligible population.

When asked, in an interview with progressive news program Democracy Now, how Iglesias and Podemos transitioned from the Occupy-like 15-M movement to a powerful political party, Iglesias explained, "we understood very well that if you need to change the things, you need political power."

Podemos is now the third-largest party in the parliament, and has taken Spanish politics by storm.