Too far? With an edgy, smart sketch about how men marry younger second wives? Shut up and sit down, Internet 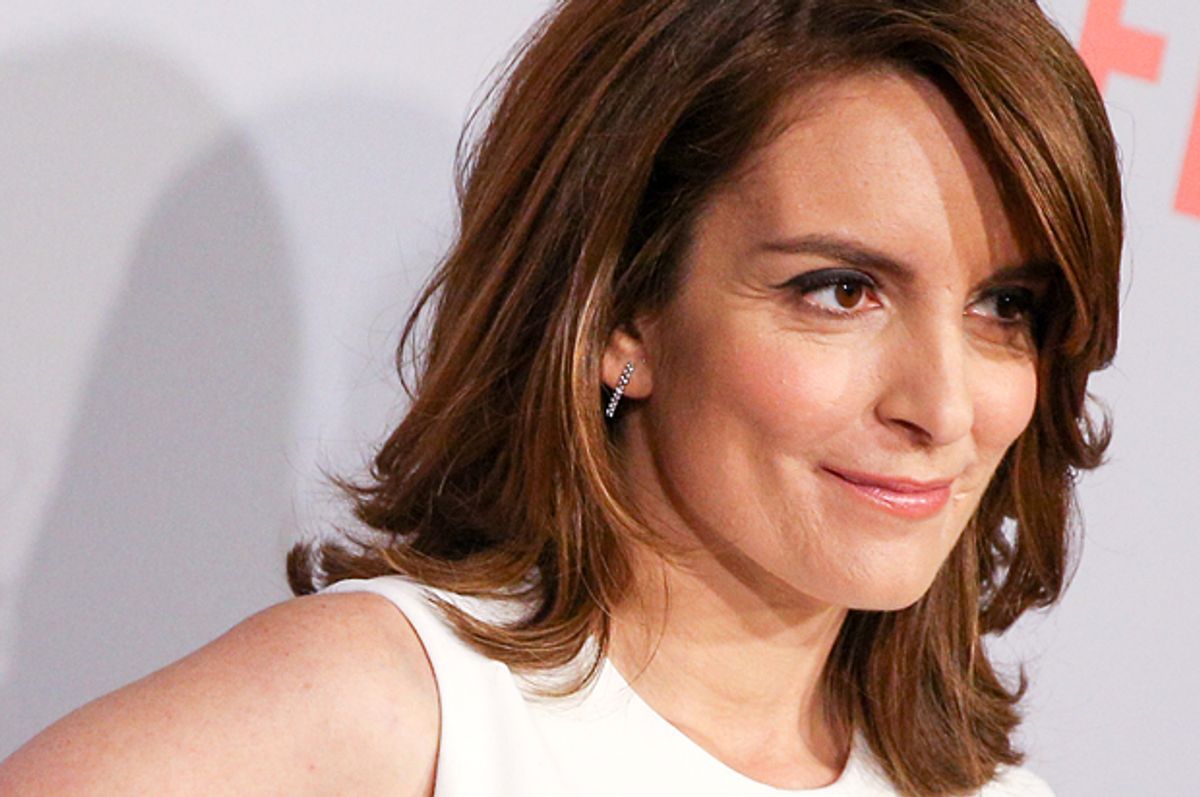 God, I love you, Internet. You are nothing if not fearlessly reliable. Just days after Tina Fey spoke with Net-A-Porter about how she was "opting out" of the public's seemingly inexhaustible need to take umbrage, she finds herself the subject of criticism regarding whether she and bestie Amy Poehler went "too far" on their weekend "Saturday Night Live" hosting gig. You can decide for yourself whether they did, but I strongly recommend you not hold your breath waiting for Fey to say sorry.

Fey has had a bang-up 2015. In January, she and Poehler co-hosted the Golden Globes -- and fearlessly tossed off a few Bill Cosby jokes along the way. In March, "Unbreakable Kimmy Schmidt," the Netflix sitcom she co-created with Robert Carlock, became became the must-binge hit of the spring. Frankly, if all she'd given us this year was the "white spiders" line in the memorable "Inside Amy Schumer" "Last F__kable Day" sketch, Fey could have packed it up. And though her new comedy "Sisters" has received only tepid reviews, it still pulled in a respectable $13.4 million on its opening weekend — not bad when apparently some other movie about outer space or something also opened.

But her year has not been without controversy. Since it premiered, some critics have questioned "Kimmy Schmidt's" approach to race — including a sweetly naive Asian character named Dong and a plot turn that revealed the blonde socialite played by Jane Krakowski was in fact a Native American woman passing for white. Was it satire, or stereotyping? Writing in Buzzfeed in March, Ira Madison III said, "When characters aren’t authentic, you don’t relate to them — they feel like caricatures/outsiders." Yet the show also featured one of the year's most memorable subplots, in which Kimmy's roommate Tituss realizes he's treated better dressed as a werewolf than he is as regular his African-America self. And speaking about the show to Vulture this spring about the accusations of racial insensitivity, the show's co-star Tituss Burgess shrugged, "The naysayers needed something to do and talk about, so they can have a seat now."

Then last week in Net-A-Porter, Fey herself issued a similarly resounding nope. "Steer clear of the Internet and you’ll live forever." she said. "We did an 'Unbreakable Kimmy Schmidt' episode and the Internet was in a whirlwind, calling it 'racist,' but my new goal is not to explain jokes. I feel like we put so much effort into writing and crafting everything, they need to speak for themselves. There’s a real culture of demanding apologies, and I’m opting out of that."

But while not outright demanding apology, the critics didn't have any trouble coming up with some firm uneasiness after Fey's most recent "SNL" episode. It was an echo of when she hosted four years ago, and BigThink's Lindsay Beyerstein called a sketch about natural childbirth "an exercise in meanspirited hippie punching" and asked if it went "foo far," while The Stir observed, "It's no joke that we, as a society, are notoriously bad at informing and teaching women about natural parenting ideals and alternatives without them seeming totally hippie dippie and weird." This time around, a scorching sketch about a game show called "Meet Your Second Wife"— in which adult male contestants meet their current, far-too-young, future brides — drew gasps from HuffPo over whether it, too, went "too far." Entertainment writer Cole Delbyck pondered, "Did the sketch need to go that young to prove its point?" I don't know; I'm guessing when you're one of the most powerful women in American comedy and you're working in an industry in which Johnny Depp is married to a woman who was one when "21 Jump Street" premiered and George Clooney's wife was in high school when he became a star on "ER" and Han Solo is 14 years older than Leia, maybe the answer is yes.

Fey is a white woman who grew up in suburban Pennsylvania, a woman who now makes a lot of money in television and film. That's her reality. And no, not every joke she is involved with — even peripherally — lands with utmost precision, achieving both biting social commentary and gut busting laughs. Yet she's right to be unmoved by the constant din of Internet outrage. It can be very hard to stay true to one's creative voice in such cacophony. Then again, if you're like Fey, it can be very liberating. Because once you see that anything you do is going to make somebody mad, you don't have to worry about pleasing anybody but yourself.

Update: A previous version of this story didn't note the childbirth sketch was from a prior "SNL." It has been amended.