Fox News' new war on truth: This is why Donald Trump and GOP field get away with lies

Stephen Colbert defined "truthiness" for lies of the Bush era. They've gone to a whole new level in 2016 race 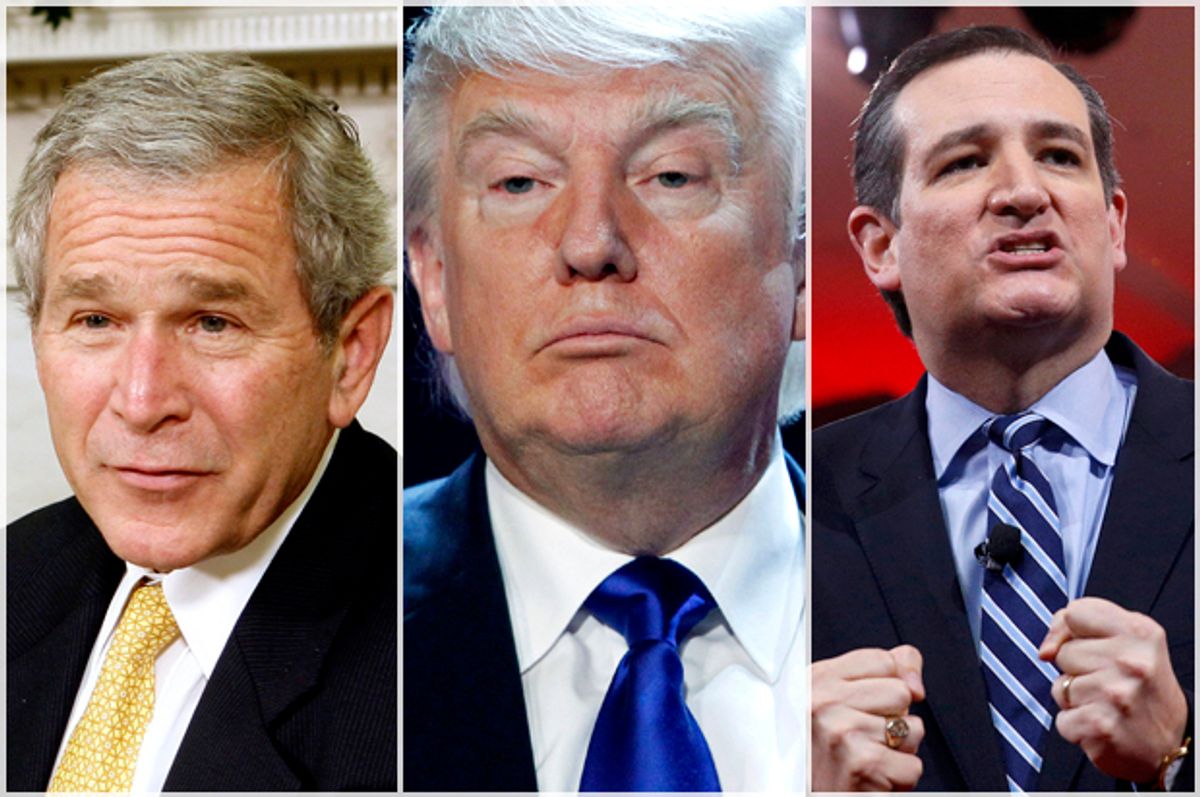 Back in 2005, when Stephen Colbert coined the term "truthiness" on the first episode of "The Colbert Report," he offered viewers the vocabulary they needed to describe the way that the George W. Bush administration manufactured their own truths. At the time, truthiness came to signify a betrayal of the American public and an attitude of political arrogance that led us into an unjustified war. But even more important, truthiness mattered. It made a difference. It was named "word of the year" by both Merriam Webster and the American Dialect Society.

Ten years later, as presidential candidates of both parties lie with no consequences, it all seems pretty quaint. Truthiness no longer registers as a problem, let alone an accusation of political manipulation. It's hard to imagine nostalgia for the George Bush administration, but at least back then we had real outrage over his lies. Today we have entered the era of Truthiness 2.0. In the 2016 election cycle, politicians not only lie with impunity, they actually profit from their lies.

Now all politicians lie, stretch the truth and exaggerate to advance their position. Lying is nothing new.  The new part of the story is the extent of the lying and the absence of political consequence. Angie Drobnic Holan, editor of Politfact, notes that the fact checking business is in high gear this electoral season. But the results are not encouraging. She tells us that GOP frontrunner"Donald J. Trump’s record on truth and accuracy is astonishingly poor." Nearly three-quarters of Trump's statements are rated false, mostly false or "pants on fire."

Ben Carson does slightly worse. Neither candidate has had one checked statement log in as true. And while there are plenty of examples of lies from the democrats, it's worth noting that the incidence of lying slants clearly to the right.  As Chris Mooney puts it, “politicized wrongness today is clustered among Republicans, conservatives, and especially Tea Partiers.”

So how is a racist liar like Trump still a thing? And why is Carson still in the race?  He even made the loony claim that the Egyptian pyramids were used to store grain!  But rather than end his political career Carson’s pyramid claim might have actually helped him.  What’s going on?

The answer is due, in part, to the mainstream news media and the increased power of Fox News. The folks that support Trump and Carson largely get their news from Fox News-- the network that uses the trademark "fair and balanced" to hawk lies and fear. Fox News has been shown to be a major agent of disinformation. Politfact explains that they lie about 60 percent of the time. Only 10 percent of the Fox News claims they rated were true.  This is why their viewers score so badly on tests of their knowledge with one study suggesting that people who watched no news of any kind scored higher on aptitude of current events than Fox News viewers.

But that's not all of it. Fox News viewers don't only suffer from a network that lies; they are also victims of the increasing politicization of truth. It is no longer the case that we have commonly accepted truths from which we derive our political beliefs. Now every truth is itself ideological. Truths are not drawn from evidence and fact; they are culled from deep belief systems. And while this happens across the political spectrum, it is especially true for members of the GOP.

As Mooney explains in his study of the Republican brain, we now have increasing examples of conservatives denying commonly held truths like relativity.  Science is seen in some conservative quarters as fundamentally ideological, a thing that one does or does not believe in.  Mooney points out that conservatives’ “willingness to deny what's true may seem especially outrageous when it infects scientific topics like evolution or climate change. But the same thing happens with economics, with American history, and with any other factual matter where there's something ideological—in other words, something emotional and personal—at stake.”

This of course was exactly what Colbert was diagnosing with truthiness 10 years ago.  It was the manufacturing of truth and the dissemination of those truths as firmly held beliefs to a captive audience.  It is as though those that live in the land of truthiness occupy a parallel universe where facts matter not at all. As Mooney puts it, “today's conservatives have their own ‘truth,’ their own experts to spout it, and their own communication channels—newspapers, cable networks, talk radio shows, blogs, encyclopedias, think tanks, even universities—to broad- and narrowcast it.”

But it’s even worse. Brendan Nyhan and Jason Reifler conducted one of the most revealing -- and depressing -- studies of truth and politics. They showed that when conservatives hold a false belief and are shown irrefutable evidence to the contrary, rather than change their mind, they actually cling more tenaciously to their misinformed belief.  They found that Republicans held more firmly to their false beliefs about the Iraq War when exposed to correcting information.  They practiced "motivated reasoning" and were skeptical of any information that contradicted their ideas. They simply wouldn’t listen to any source of information from outside their bubble.

This is why Carson's campaign could actually profit from being caught in a lie. When Politico caught Carson lying about receiving a scholarship to West Point, proving he had, in fact, never applied, Carson's camp used Politico's story to claim that Carson was being smeared by the "liberal media."

And he isn't the only GOP candidate to play that game. Now any Republican candidate caught in a lie gets the chance to rant about the way they are victims of media bias. Not only do they avoid taking responsibility for their lies; they get sympathy points for withstanding an unfair media attack.

Republicans might worry about a "war on Christmas" but the real war tearing apart our nation is the war on truth.

The thing is Colbert nailed the damaging effects of truthiness on day one of his show. In an interview on his definition of truthiness, Colbert explained:

Truthiness is tearing apart our country… It used to be, everyone was entitled to their own opinion, but not their own facts. But that's not the case anymore. Facts matter not at all. Perception is everything. It's certainty. … I really feel a dichotomy in the American populace. What is important? What you want to be true, or what is true?

The brilliance of Colbert was that he was able to nail the problem at a time when very few in the media were bothering to care. Not long after launching his show, he stood five feet away from President Bush and called him out his lies, arrogance, and ego. His performance at the 2006 White House Correspondents' Association Dinner stands as one of the most powerful moments in U.S. satire of all time.  The performance catapulted Colbert's career, but it also energized the public to call for an end to political lying. It's worth noting that almost all of the well-known fact checking organizations in play today launched in the post 9-11 political climate of lies. (FactCheck.org 2003; Politfact 2007; NewsTrust 2005.)

And yet many of the Bush administration lies would take years to emerge. A study released in 2008 found that "President Bush and his top aides publicly made 935 false statements about the security risk posed by Iraq in the two years following September 11, 2001."  The story broke a good five years after the lies were made.

But even more importantly the story broke after Colbert coined truthiness as the word that exemplified the Bush administration.  As news of the lies poured in, we had the needed lexicon to talk about it.  And we had the added intellectual spark created by the irony of Colbert’s satire.  We had the facts and we had the critical energy needed to care about them.

Now under truthiness 2.0 we have a different comedy landscape.  Colbert has moved over to CBS and shed his pundit persona.  The less politically incisive Trevor Noah has taken over for Jon Stewart.  New shows like Larry Wilmore’s “The Nightly Show” and Lee Camp’s “Redacted Tonight” have emerged on the scene to offer fresh critical comedy.  Within this new highly varied satire scene, lying candidates like Trump and Carson get nailed on a daily basis.  But somehow it hasn’t yet been able to make a difference.

In fact it now seems commonly accepted as true that GOP politicians lie.  It’s the new normal.   Now the jokes are not about the idea of lying, they are about the art of the lie itself.  It’s hard to mock something that is already a mockery.

But there may be a glimmer of hope. It’s worth remembering that Paul Ryan won the lying award when he was running with Mitt Romney in the 2012 election.  At the time he also seemed to be running away with his lies too, with no consequences of any kind.  His campaign even told the media that they were “not going let our campaign be dictated by fact-checkers." It all seemed pretty grim. Until he lost.  Let’s hope we can turn this batch of liars into losers, too.